Will Museum of Museums Ever Fully Open? Maybe by October, Says Director 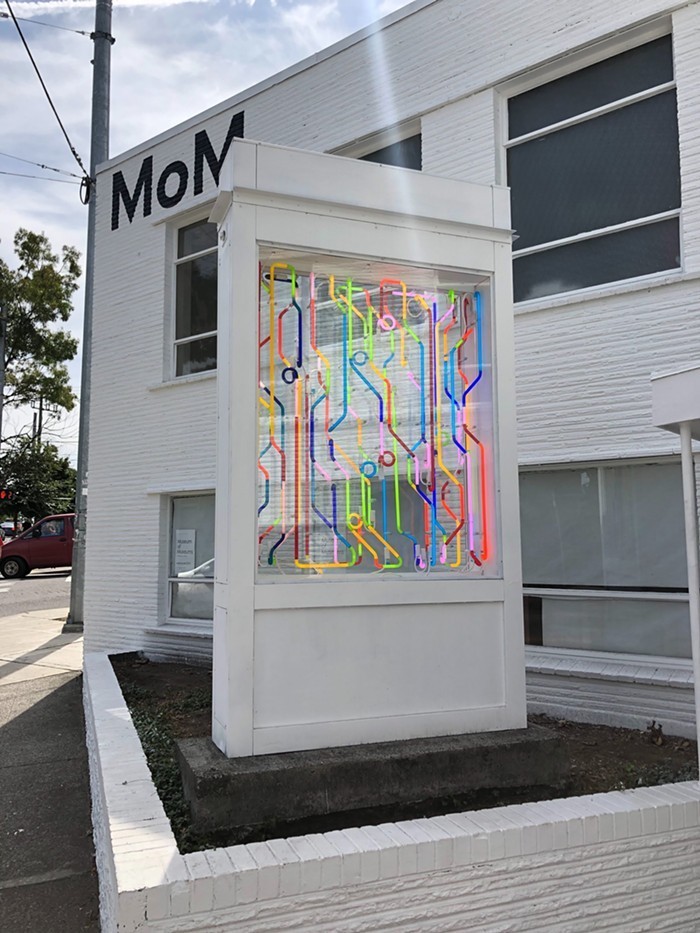 One day I will see art on the top floor of this building... one day. Jasmyne Keimig
Museum of Museums, the buzzy art space and brainchild of artist-entrepreneur Greg Lundgren, is still planning on officially opening. It's just a matter of when.

The multi-level museum on First Hill ran into some problems earlier this year when their planned February opening fell through due to zoning issues with the city. Though the bottom half of the building is approved to host events, pop-up markets, and a gift shop, the top floor—the True Space, an exhibition gallery—is zoned for medical use only, as the building had been a medical office and retail space owned by Swedish Health Services before Lundgren took it over.

Over the phone recently, Lundgren told me that the city "refused to recognize art as alternative medicine," an argument he put forward in an attempt to legally use the upstairs space to host their first show, Energy Drink, an immersive collaborative exhibition by Neon Saltwater and Brian Sanchez. After hiring architects, land use attorneys, and permit specialists to argue for the rezoning of the top floor, negotiations between the museum and the city eventually hit a wall.

"We ended up having to pay thousands of dollars for a temporary use permit, which allows us to use the third floor art exhibition for up to five years," he told me. Lundgren claims it'll cost MoM about $15,000 in fees for the first year and $5,000 each following year in order to be "given the right to put art on the third floor." He called the pushback from the city "frustrating," but the museum was back on track for a June 4 opening—until coronavirus hit.

Like virtually every other museum, gallery, and art space in the city, MoM was forced to stop all of its public programming, another hurdle in the long stretch to open the museum part of the museum. "It's kind of a humbling in that you realize that the landscape is shifting so quickly and so erratically that it's impossible to really plan," Lundgren said of MoM's path forward.

But, in spite of this shifting landscape, he said the museum will activate the first floor with pop-up exhibitions, classes, and the gift shop as soon as they are able to do so, probably sometime during Phase 2 in June. A virtual figure drawing class is already in the works, an idea carried over and adapted from The Before times.

Though, generally, Lundgren says he has a "deep reservation" about going too virtual, finding more meaning in the face-to-face, the IRL, the physical. "I'm very reluctant to create our programming that has a long term ramification of isolating people further [and] of not viewing artworks in person, whether that's theater or music or visual art."

The opening of the top floor exhibition space is what's most unclear.

"MoM was built off a business plan that did not take into consideration social distancing, did not take into consideration reduced capacity," he said. To make their exhibitions more financially feasible, MoM is now shooting for an October opening, but that isn't set in stone. "These exhibits are really expensive to produce, so if you put this money into an exhibit, but only a quarter of the people can see it... it poses some economic realities that even given permission to open might not make fiscal sense."

Despite the zoning delays and a worldwide pandemic, Lundgren says he has every intention of officially opening the museum from top to bottom. He believes MoM is "needed now more than ever" as an arts space (and business) that brings visibility to regional artists.

"The only prediction that I can make is that people are not going to stop making art," he said. "Arts and culture survives through every war, every pandemic, every tragedy. We'll be here on the other side."