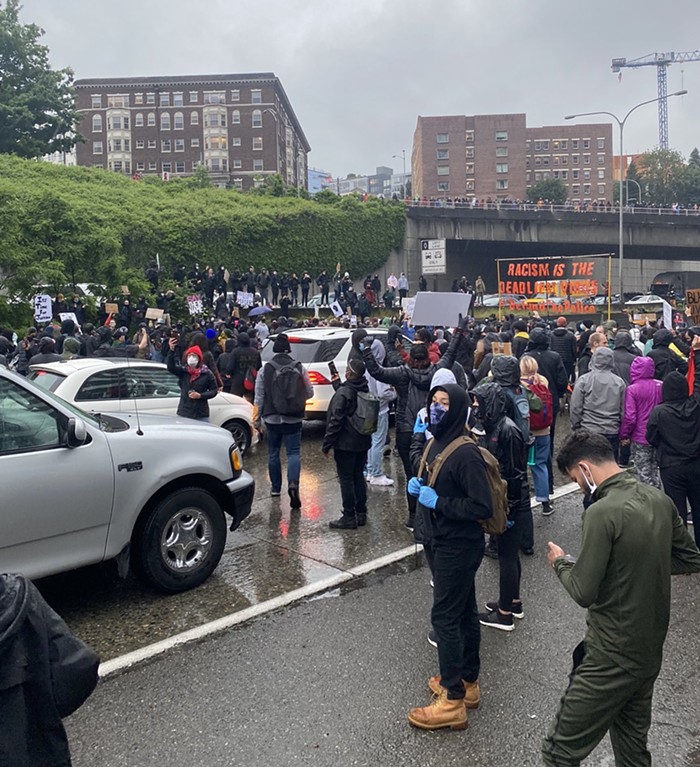 Demonstrators took the protest against police brutality to the freeway. CHASE BURNS
Originally published at 4:55 p.m.
Saturday afternoon, police and protestors clashed near Westlake Center in downtown Seattle after hours of demonstrations and speeches calling for justice for George Floyd, who was killed by police in Minneapolis earlier in the week.

Police say protestors threw water bottles at officers, prompting the cops to fire flash-bang grenades and tear gas into the crowd. "The crowd has set several patrol cars on fire in the downtown core near Westlake Center. Several arrests have been made," according to the Seattle Police Department.

Many people who arrived around 3 p.m. for the planned "Defiant Walk of Resistance Against Injustice" at Westlake Park said they were immediately met with police force. A woman could be heard yelling "but this is peaceful" while police pushed dense crowds away from Westlake using flash-bangs. 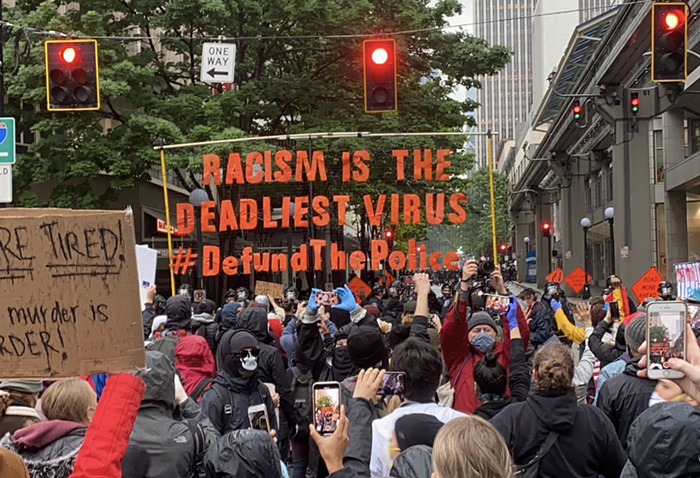 Police continued to push protestors back along 5th Avenue downtown. CHASE BURNS
After being separated from Westlake Park by police, part of the crowd marched to I-5, eventually shutting down both the southbound and northbound lanes at Seneca. Protestors on I-5 were met with cheers from onlookers standing on overpasses as they marched southbound, eventually exiting and reentering downtown.

At the request of Seattle, Gov. Jay Inslee "activated" the Washington National Guard. Two hundred soldiers will work "unarmed" to "help protect against property damage and manage crowds and traffic during downtown protests," according to a release.

At around 4:45 p.m. Seattle Mayor Jenny Durkan, Police Chief Carmen Best, and Fire Chief Harold Scoggins announced a 5:00 p.m. to 5:00 a.m. curfew for Saturday and Sunday, effective 15 minutes after the order. The curfew is "voluntary" and the city "does not intend to enforce the curfew, except for violations that result in public health and safety threats including fires, extensive property damage, and violence," according to a press release.

More on the curfew:

The temporary curfew does not impact people who need to commute to work during these hours, people experiencing homelessness, people in a medical emergency or people in a dangerous situation, first responders, health care workers, and the news media. In addition, the curfew does not require businesses to close while it is in effect, and it will not alter public transit schedules.

Durkan also issued two other emergency orders, one declaring a civil emergency and one banning all weapons in the city, including "rocks, pipes, clubs, guns, and flares." Get ready to see more arrests.

Update 8:47 p.m.: Seattle City Council President M. Lorena González and Councilmember Lisa Herbold, who chairs the council’s public safety committee, issued a statement asking for "a detailed after-action, incident report which should include details specific to rifles stolen, police vehicles destroyed, damage to property and to the Interstate as a result of the demonstration." They have invited the Mayor’s Office, Chief Carmen Best, and Chief Harold Scoggins to brief the council on Wednesday, June 3. "We ask that people who are still downtown to please go home," they concluded. "We do not want additional escalation nor to learn of more injuries, whether to protestors or first responders."

"Unclear where they may have gotten that cheesecake." pic.twitter.com/mLfSJvMGvZ
— Timothy Burke (@bubbaprog) May 31, 2020

6:58 p.m.: In a press conference Saturday evening, Durkan praised peaceful demonstrators and condemned "the people who came down to Seattle" and allegedly "hijacked" the protest when it "quickly turned violent and destructive" later in the afternoon. Durkan claimed that some threw Molotov cocktails at buildings causing "multiple fires," and that some threw fireworks into the crowd that the fire department couldn't immediately access. Federal authorities will investigate those fires. She said her office was unaware of "any serious injuries." Durkan added that she issued the emergency orders so "police could take action if they needed to" against people looting or "throwing projectiles." Videos of officers firing off flash bangs and tear gas will be reviewed and "any police officer violating use of force [policies] will be held accountable," she said. SPD Assistant Chief Lesley Cordner said two "AR-15-style weapons" had been stolen. One was recovered, one was not. She advised downtown residents to shelter in place and told everyone else to avoid downtown.

We reject the crocodile tears of Seattle Mayor Durkan, Seattle Police Chief Carmen Best and the local Democratic establishment! These same police officials and politicians, who claim to be saddened by the murder of George Floyd, have enabled the systematic racism and violence from the Seattle Police Department. In 2018, the mayor and every Democrat on the City Council voted for the Seattle Police Officers’ Guild contract, which rolled back many of the limited police accountability reforms that had recently been passed under pressure from the Black Lives Matter movement. I was the only No vote on the City Council...

Mayor Durkan, who was on television expressing her sadness for George Floyd, is currently leading the charge to remove the SPD from the consent decree. And at a time when she is signaling massive budget cuts to social programs, she is also attempting to revive the 160 million dollar North Police Precinct, which our Block the Bunker movement successfully defeated in 2016. And in all this, she will scandalously have the support of the majority of the City Council, unless we fight back.

6:10 p.m.: People seem to like the music coming from this truck:

This truck pulled up and started blasting music pic.twitter.com/L8jFaYpZWP
— nathalie graham (@gramsofgnats) May 31, 2020

Just a block away from the peaceful protest on Stewart #seattleprotest pic.twitter.com/Jhi0tMIkf1
— nathalie graham (@gramsofgnats) May 31, 2020

Update 5:40 p.m.: We got some looting at Nordstrom and Starbucks downtown, per KIRO:

Update 5:33 p.m.: Demonstrators kneel in prayer as the Governor activates the National Guard:

Kneeling at 7th and Stewart pic.twitter.com/fqeKmzUzOo
— nathalie graham (@gramsofgnats) May 31, 2020

Update 5:03 p.m.: After police attempts to disperse, demonstrators took the fight against police brutality to the freeway:

Here’s the burning cop car with what I’m assuming is a Old Navy mannequin that has seen better days pic.twitter.com/4rUsuIyQeO
— nathalie graham (@gramsofgnats) May 30, 2020

Crazy! Guy finds what looks like AR-15 in busted up police cruiser and gets gun pulled on him immediately. #seattleprotest pic.twitter.com/fXAvB9Wkzo
— Jason Lynch (@206Lynch) May 30, 2020

also props to the guy who has a live bunny with him pic.twitter.com/fFYejGt2Fl
— nathalie graham (@gramsofgnats) May 30, 2020

A sign left behind near Westlake Park pic.twitter.com/7UPdfEreyn
— Asia Fields (@asiakmfields) May 31, 2020

Update 4:00 p.m.: Demonstrators gathered at noon outside the West precinct downtown for the March for Justice for George Floyd. Some then joined the crowd at Westlake for the Not This Time! rally, organized by Andre Taylor, whose brother, Che Taylor was killed by the cops in 2016.