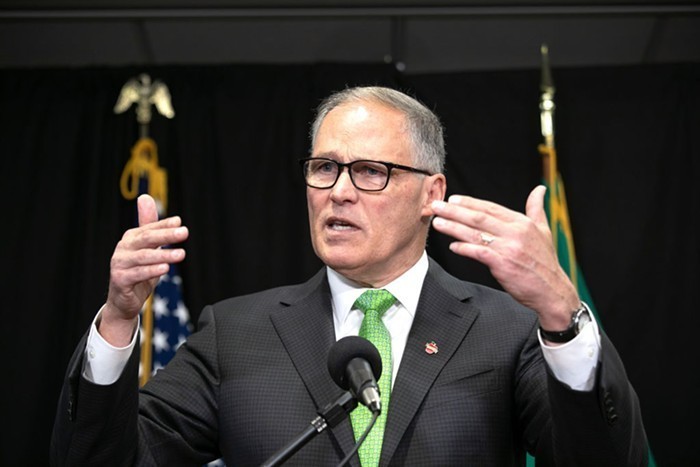 Like other executives, Inslee reiterated his understanding that people are "justifiably outraged" at the police killing of George Floyd. JOHN MOORE / GETTY IMAGES
As a crowd gathered in Westlake Park for a fourth day of protesting against police killings and racial injustice, Gov. Jay Inslee held a press conference in Olympia along with Washington Adjutant General Bret Daugherty of the National Guard.

After choking up while reading a speech delivered by Bobby Kennedy on the night James Earl Ray assassinated Martin Luther King Jr., which the Governor's late father had read to him the night of the assassination, Inslee quickly announced the extension of a statewide eviction moratorium set to expire on June 4. More specifics will come tomorrow, though Inslee said the moratorium, which freezes rent hikes and bans residential eviction for lack of payment, will include "modest adjustments" likely demanded by statehouse Republican leaders, who have to sign-off on certain proclamations that involve alterations of state law. The modified moratorium will promote "increased communication between tenants and landlords," Inslee said.

As for his position on the protests: Until a reporter for the South Seattle Emerald asked him to, Inslee didn't address multiple accounts of violent police behavior captured on video over the weekend. The Seattle Office of Police Accountability counted "approximately 12,000 individual complaints" involving officer conduct over the weekend, including incidents where cops apparently used knee-to-neck holds, pepper-sprayed young children, allegedly instigated arrests, and tossed flash bangs and tear gas into crowds of the peaceful protestors executive officials have made such a point of praising. And even after the reporter raised the question, Inslee only offered the standard, bloodless reply other executives have offered: he's sure there will be a "thorough investigation." According to SPD, 82 people were arrested for events related to the weekend's protests.

Rather, like other executives, Inslee reiterated his understanding that people are "justifiably outraged" at the police killing of George Floyd. Though the right of people to "demonstrate with their feet and with their voices" is enshrined within the Constitution, "violence and destruction...is not productive, and it's not Constitutionally protected," he said. He commended those who peaceably demonstrated and urged fire-starters to "knock it off," and promised that looters and vandals will be prosecuted.

A quick rant here: It is worth noting that while this narrative echoes similar criticism from some Black leaders and some organizers on the ground, it also does a couple other things. It co-opts the message of the very groups who have organized to criticize the state for perpetuating racist violence since time immemorial and uses that message to obscure the role of politicians in this process. Neither Inslee nor Seattle Mayor Jenny Durkan has stood up and said, "I have taken my own advice and heard the message the good protestors have sent us about police brutality, and so now I will do x, y, and z in response." Rather, despite the fact that Durkan is still trying to wiggle out from under a federal consent decree, both have patted themselves on the back for previous work that others have done, and have offered vague promises to "do better" on a number of issues related to racial inequality.

Anyhow, when asked at the press conference if he'd like to see more or fewer armed residents lining up in small towns ready to shoot protesters, Inslee said "police officers are the ones trained and have the responsibility to keep us safe, and that's the first order of safety we'd encourage."

General Bret Daugherty gave a more direct reply, asking people to "remain calm" and not "run around with weapons." The more weapons there are at a site "the more likely you are to have an accidental shooting," he said.