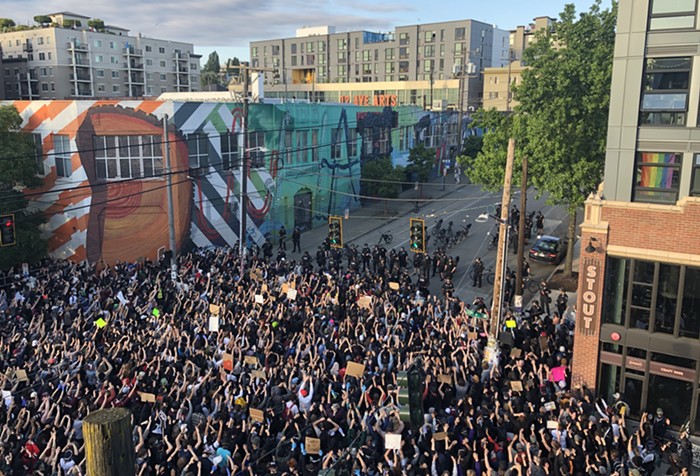 11th Ave. and Pine St. on Monday evening. The crowd held their hands up, chanting, "Hands up, don't shoot!" RS
A fourth day of protests demanding justice for George Floyd and an end to police brutality escalated quickly Monday evening after an officer snatched a pink umbrella from the hands of a demonstrator standing in front of a police barricade on 11th Ave. and Pine St. on Capitol Hill.

Video of the incident, shot by Omari Salisbury, shows police wearing gas masks and pointing pepper spray at the crowd, the red lights of their body cameras blinking. Protestors on the frontline raised umbrellas in anticipation of getting sprayed. After a little tug-of-war with the pink umbrella, officers begin unloading pepper spray, flash bangs, and tear gas into the group.

Here's a slightly longer version of the same scene:

And here's a rooftop guy's view, which shows some crowd-side flashes before the umbrella tussle:

This is the moment it all happened from r/Seattle

Police say the "crowd threw rocks, bottles and fireworks at officers and attempted to breach barricades one block from the east precinct," prompting them to declare the demonstration a "riot." A group of protesters who'd fled the intersection said they'd seen protesters tossing plastic bottles before police gassed the place.

The crowd split up shortly after the clash. Some ran for safety into Cal Anderson Park, others headed back downtown, others were held up by a police line at 13th and Pine St., and still others built a quick barricade out of dumpsters on 11th Ave just north of the intersection.

A line of officers moved up 11th, lobbing tear gas, flash grenades, and fireworks into Cal Anderson Park, where someone was sleeping and where others fled for fresh air.

The police advanced as far as E. Denny Way, and then engaged in a dance with protesters and others identifying themselves as people who lived in the neighborhood. Cops would retreat a little, prompting demonstrators to follow with their hands up. Then the cops would stop, form a line, and toss a flash bang.

The protests did not begin this way. Demonstrators initially gathered in Westlake Park around 3:00 p.m. before demonstrating at City Hall. They headed up toward the East Precinct on Capitol Hill around 7:00 p.m.

As they marched, organizers, who were determined to keep things peaceful, instructed the crowd via bullhorn to kneel if they saw anyone trying to cause trouble. Demonstrators chanted, "Hands up, don't shoot," and, "What's his name? George Floyd!" When they reached the police line just short of the precinct on the Hill, various speakers announced various requests.

Speakers asked police to take a knee in solidarity with the protestors. A few police officers, including East Precinct Captain Bryan Grenon, obliged. Speakers also demanded to meet with Mayor Jenny Durkan. She did not arrive. Organizers then demanded to walk one more block east to the police station. The cops refused to budge, perhaps recalling incidents near the west precinct during the Saturday protests, when police reported "HQ under siege" after demonstrators threw stuff at it. Unsatisfied with merely viewing the east precinct and watching officers take a knee, many protestors marched around the block to 13th and Pine, splitting up the group and causing some amount of confusion among the crowd regarding the goal of that particular action. Thirty minutes later the umbrella was snatched.

As the demonstrations wound down late Monday night, some protesters marched back downtown while a few remained on 11th, listening to reggae and cleaning the streets. “See you tomorrow,” one protester yelled to another. “Every day,” the other replied.