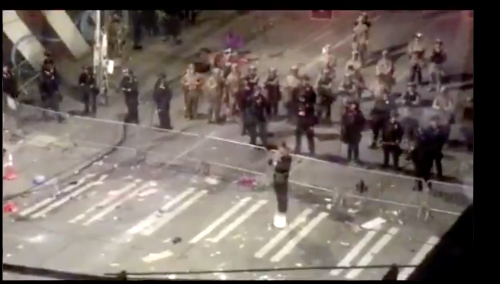 Sorry for the foggy picture :( This was on about hour five or six of streaming. Nathalie Graham
Yesterday's protest was peaceful for hours until it wasn't. At about 11:30 p.m. agitators from the crowd started chucking water bottles at the line of Seattle Police Department officers and National Guard members. After someone threw a traffic cone, shit got real. The National Guard condensed behind their riot shields, SPD threw flash bombs, tear gas was deployed, and protesters scattered. The scene that followed felt like it belonged in a war movie. Armored trucks and humvees rolled into the intersection of 11th and Pine, a peloton of bike police flocked into position, all the while I was stuck above in The Stranger's offices, live-streaming.

Finally, the smoke cleared and SPD moved back into their position behind a barricade to the East Precinct. A lone straggler ambled in front of them and picked up his trumpet. He started playing what sounded like "When the Saints Go Marching In." The police let him play. Then, he pulled up a bucket, climbed on top facing away from the barricade, and began to play "Taps."

He was tackled by police and arrested.

When the gas finally cleared, one brave soul remained. And they let the police know that their spirit would never be defeated, through the power of song. Trumpet Guy. https://t.co/S769wpPxjA
— koush (@koush) June 3, 2020