Seattle Residents Got Tear Gassed in Their Own Apartments 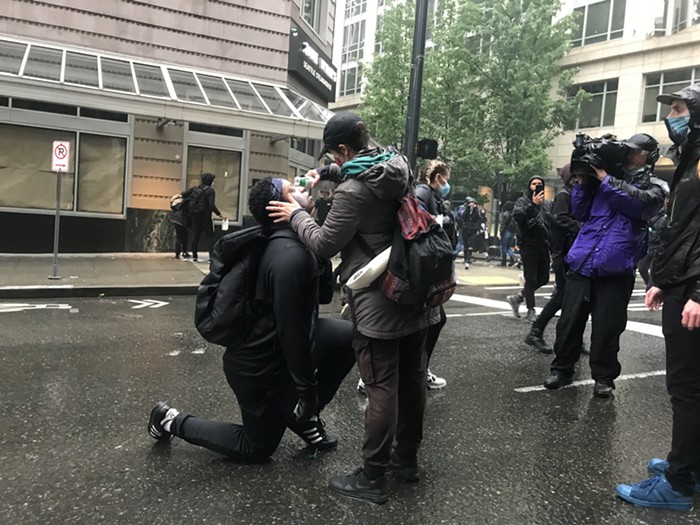 Protesters on the streets don't want to deal with this. Civilians in their homes don't either. Nathalie Graham
Maggie has started taping the windows in her apartment in Capitol Hill. She still ends up coughing each night, but it's not as bad as it was Monday night when the Seattle Police Department fired tear gas and pepper spray across the residential neighborhood.

Maggie, whose name has been changed out of fear of backlash she's already gotten from posting about her experience on Twitter from some "local right-wing militia dudes" as she described, lives right near where the George Floyd protests have been happening each night this week on Capitol Hill. She hasn't been participating in the demonstrations because of the pandemic and the vulnerable people who live in her apartment building but she says she's "100 percent in solidarity" with the movement.

On Monday, she was watching and participating from her apartment window. Suddenly, there were flashbangs. She grabbed her camera. It looked like fire. A cloud of smoke billowed upwards. Her partner rushed over yelling to close the windows. Maggie started coughing. Tears were streaming down her face. "I was like 'Oh my god, we have gas in here,'" Maggie said.

Maggie is one of many Capitol Hill residents who has choked on SPD's militarized crowd-clearing tactics from inside her own home this week. She was incapacitated, she said, her mind racing. She ran into the hallway. Her neighbors were all there too in search of breathable air. One couple next door sat with their six-month-old baby, some had their small pets, others went to check on the immuno-compromised neighbors upstairs in their 70s. It took about two hours for their units to become breathable again.

"I don’t want to make this about me or us," Maggie told me. "But it's shocking when it enters our home."

The response from the police felt excessive like she was—not to be too dramatic, she prefaced—living in a war zone.

"As soon as my eyes stopped watering I was just crying for the protesters," she said. "If it felt that bad for me I can’t imagine what it was like for them."

It was the same story Tuesday night. Here is some of the footage I took from my office building:

More of 1️⃣9️⃣0️⃣ above in Seattle

SPD's use of tear gas has come under fire this week. The chemical substance, which is actually a dispersion of tiny crystals as opposed to gas, was banned from international warfare in 1997 yet is still a popular crowd control weapon. It causes irritation around the eyes and skin but has the potential to cause respiratory issues. According to OneZero, it may make people "more susceptible to respiratory illness, like influenza or COVID-19." So why, activists and Seattle city council members have asked, is it being used in the midst of a respiratory health crisis?

Councilmember Lisa Herbold, the chair of the city council's public safety committee, said during her committee meeting on Wednesday that she had never "in 25 years of participating in protests in the city of Seattle experienced such indiscriminate use of tear gas...and flash bombs against people who are not doing anything wrong with so little effort to de-escalate."

Prachi Dave the co-chair of the Community Police Commission said in the meeting that she was concerned over SPD's "disregard for rules altogether," especially the rules relating to crowd management that specify that dispersal orders must be given by police before using blast balls, pepper spray, or tear gas. "That policy appears to have been disregarded for the past several days," Dave said.

David Reeves had returned home from marching with the protest all day on Monday. When the tear gas was deployed, he was around a block and a half away in his studio apartment. It was quickly enveloped in gas. Reeves has asthma. His eyes and throat were burning. He donned the mask that he had for prevention against COVID-19 but it didn't do much.

Needless to say, this is small potatoes compared to what others have endured. I’m fine and I will be fine. Respect to everyone fighting.

It was only mild discomfort for him, Reeves said, but he was upset that "what had felt like a united and focused demonstration as we walked up Pine would produce this result."

"I obviously can't speak to who was or wasn't responsible for what happened," Reeves said, "but it seems to me like a chemical like tear gas in a residential neighborhood should be an absolute last resort, and I do question whether the actions of the crowd met that standard."

Last year, when Hong Kong's protest waged on for months, tear gas wafting into people's homes became a new normal. The particles, heavier than air, often settle on the ground and objects. If tear gas has gotten into your apartment, you'll need to ventilate and scrub and clean and also try not to eat any food that may have been contaminated. More on food safety and tear gas here. Cleaning and tear gas here.

Seattleites don't want to become accustomed to this. Several spoke, frustrated, during the public comment periods at the council committee meeting yesterday. One father relayed how his infant woke up in the middle of the night, bright red and foaming at the mouth from tear gas.

“My 3mo-old son … who was sleeping, was awoken from his sleep coughing, crying, spitting out mucus,” he said, telling the council he and his wife and son fled in their car. “Mucus was bubbling out of his nose, he was bright red. … My wife had to pour breast milk on his eyes.”
— Teresa Mosqueda (@TeresaCMosqueda) June 4, 2020

Another Capitol Hill resident penned an angry letter to Mayor Jenny Durkan: "You invaded my home, you invaded my very bedroom, all the while shooting at innocent civilians who are rightly protesting the daily, senseless murder of black men and women at the hands of Seattle police."

It's unclear whether SPD will stop using tear gas for good. Wednesday's protest remained peaceful and SPD did not fire any tear gas for the first time this week. However, it remains to be seen if that restraint on SPD's behalf will last.

"I’m hoping practices are changing in real-time," Herbold told me, "but I have not been informed of any changes in policy."

For now, if you live around where a protest is happening make sure to tape your windows or seal any gaps with wet towels and turn off air conditioners if you have them.

"I have had a non-stop headache since this happened," Maggie lamented. "I never expected to experience tear gas in my building."