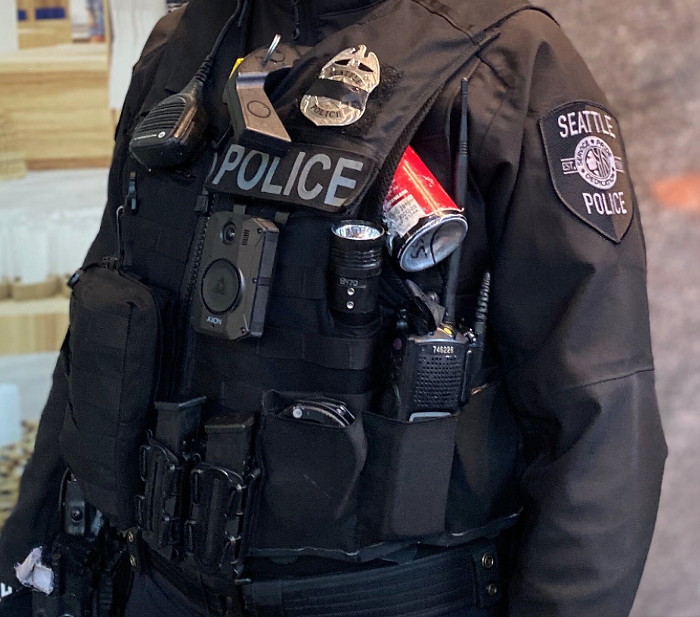 Who is she? Evan Hreha
What is unbelievable in all of this business about Seattle police officers hiding badge numbers with "mourning bands" is that we are discussing it as if it's an issue that deserves a discussion.
Sponsored

Where is there a choice in the matter? How can a police officer, a public servant, decide what he or she will do with any part of a uniform that serves a clear and useful social function? The uniform is public property. Marking it for some sentimental reason or any other is akin to defacing public property. It is nothing but disorderly for a police officer to do anything with their badge but display it as is in public.

The mourning band is a cherished law enforcement symbol to honor officers lost while protecting the communities they serve. A black band not exceeding 1/2 inch is placed around an officer’s badge. It is common to see officers display the band out of respect.

What utter rubbish. The job of a police officer must always be nothing special. The men and women in this occupation are supposed to provide a public good, like planting trees in parks, or removing waste, or repairing a transformer. If an officer is shot and killed during work, it's much the same as a City Light employee falling to their death from the top of a utility pole or something like that. It is, for sure, unfortunate; but someone has to repair and upgrade our utility equipment. The danger comes with the job, and the public pays them to do this job.

Because our society refuses to strengthen gun laws, it is not unusual for a police officer to encounter a person (usually a man violently abusing a woman) who is armed and dangerous.

Now this is a problem the public needs to address, this deserves discussion and action: How do we make police work safe and less lethal? The tone and mode of such a discussion should be conducted with the same sobriety the public and its servants would use to process a spike of deadly accidents at a sorting and recycling plant. The business of treating slain police officers like war heroes will not do, and must be strongly discouraged, if policing is to function properly.

Lastly, gangs pour liquor on the ground for their slain. They have all manner of signs and forms of ritual binding. This is fine. They do not work for the city. But I would be stunned if I saw waste collectors throwing up signs at each other. Or the landscapers of city parks marking city-owned vehicles and equipment in a "display of... respect." This is why it's nothing but appalling that this gangster-like business of signaling, marking, and displays of solidarity on police uniforms owned by the public is in any way tolerated.

Jenny Durkan was up on stage talking about how she told the police not to cover their badges... meanwhile, here are the officers behind her. 😂😂😂 pic.twitter.com/ExJtYwDHWX
— Puget Sound John Brown Gun Club (@PugetSoundJBGC) June 4, 2020


Enough of this creepy deification of police work. Make it as banal as possible. And stop killing black people.
Our small, mighty, and local team is working hard to bring you coverage from Seattle's ongoing protests and policy discussions in response to the killing of George Floyd. If you are able, please consider supporting our work.
Sponsored