Progressive Leaders Call for Mayor Jenny Durkan to Resign, or for the Council to Remove Her 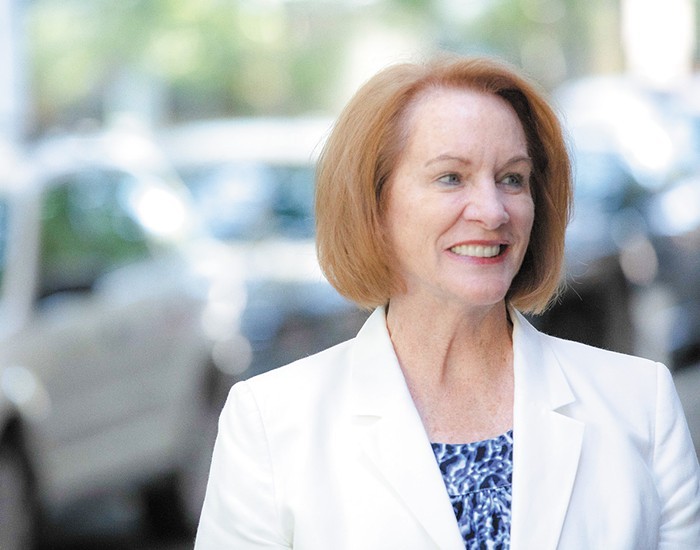 Some progressive leaders and local Democrats have a signed an open letter demanding her removal from office. LESTER BLACK
A couple dozen (at the moment) local leaders have signed an open letter demanding the resignation or removal of Mayor Jenny Durkan for her "failure to stop the Seattle Police Department from engaging in violence against its residents; for her failure to protect the safety of our communities, specifically our Black community, the homeless, and peaceful protesters; and for violating the accepted standards of our community by excusing and defending the violence used against our families, friends, and neighbors," they write.
Sponsored

"Mayor Durkan has repeatedly proven that she is either unwilling or unable to exercise control over the Seattle Police Department," the letter continues. "Mayor Durkan has failed to uphold the values of the Democratic Party, has willfully violated her duty to keep the people of Seattle safe, her duty to direct and control all subordinate officers of the City, and her duty to maintain peace and order in the City. For all of these reasons Seattle Mayor Durkan must resign or be removed."

According to the municipal code, "The Mayor may be removed from office after a hearing, for any willful violation of duty, or for the commission of an offense involving moral turpitude, upon written notice from the City Council at least five days before the hearing. He or she shall have the right to be present, to the aid of counsel, to offer evidence and to be heard in his or her own behalf. Upon the affirmative vote of two-thirds of all the members of the City Council, acting as a court of impeachment, the office shall become vacant."

They're asking all who agree to sign this petition.

Shaun Scott, an organizer and former city council candidate, counts himself among the signatories. The last few weeks have shown Durkan to be "either not capable or not willing of holding the Seattle Police Department accountable," he said. "It’s a department that has responded to protests against police brutality with police brutality, and at every step of the way Durkan has equivocated or been unclear about her willingness to enact certain measures."

Scott described the mayor's administration as "a ghost administration" and a "bankrupt administration, to put it diplomatically," and so rather than "play this out for however long she has, we may as well get the process of regime change going now," he said.

"In any other era, Mayor Durkan would be a Republican, and it took a couple of crises to make that clear," Scott continued. "COVID didn't do it. Turns out the movement for Black Lives revealed her to be what people were saying she was all along."

Here's the full letter and those who have signed so far:

We, the undersigned, call on Seattle Mayor Jenny Durkan to resign from office or the Seattle City Council to remove her for Mayor Durkan’s failure to stop the Seattle Police Department from engaging in violence against its residents; for her failure to protect the safety of our communities, specifically our Black community, the homeless, and peaceful protesters; and for violating the accepted standards of our community by excusing and defending the violence used against our families, friends, and neighbors. If Mayor Durkan refuses to resign, the Seattle City Council must remove her from office according to the provision of the City Charter. Her removal will enable her successor and the Seattle City Council to heed community demands to defund the police, to protect and expand investments to make our communities safe, and to not prosecute protesters.

The murder of George Floyd by Minneapolis Police Department and the murder of Charleena Lyles, Che Taylor, Shaun Fuhr, and so many others by Seattle Police led the people of Seattle to protest peacefully against systemic police violence against Black people in our own city and nationwide. Seattle protesters affirm that Black Lives Matter, and demand meaningful and strong police reform, accountability measures, and the redirection of funding from the police to community-based services. We stand in solidarity with these protesters and their demands for durable and lasting justice.

Here in Seattle and across the nation, police have repeatedly escalated and responded to peaceful protesters with violence. Multiple reports, photos, and videos show the Seattle Police Department targeting peaceful protesters, children, and members of the media with tear gas, pepper spray, flash bangs, and rubber bullets, while frequently covering their names and badge numbers with tape—contrary to the strong recommendations made by the Seattle Office of Professional Accountability (OPA) in 2015 and the Seattle Community Police Commission in 2016. More than 14,000 complaints about SPD police officer actions have already been submitted to the Office of Police Accountability so far.

On Monday, June 1, police escalated an encounter with peaceful protesters and deployed tear gas—a chemical weapon banned in warfare by the Geneva Convention—in the middle of the residential Capitol Hill neighborhood, harming both protesters and residents sheltering in their homes. Tear gas was deployed against peaceful protesters in the same location again on Tuesday, June 2. At a City Council meeting on Wednesday, June 3, one Capitol Hill resident testified that his three-month-old son woke up foaming at the mouth due to the tear gas, underscoring the blatant disregard that Seattle Police have for the safety of protesters and residents.

Mayor Durkan has repeatedly used her powers to declare curfews that infringed on the First Amendment rights of protesters to peacefully assemble, which provided a justification for police to crack down on protesters, and which were unevenly enforced. The first curfew was not announced until minutes before it was to take effect, giving protesters no chance to leave before they were in violation of the curfew. After days of complaints, Mayor Durkan finally lifted the curfews on Wednesday evening. We do not believe it was a coincidence that the first night without a curfew was also the first time that protests on Capitol Hill ended without the police tear gassing protesters. We hold Mayor Durkan directly responsible for the use of tear gas in a residential neighborhood on Monday and Tuesday.

We were additionally dismayed that it took Mayor Durkan nearly a full week of dissembling and delay to take the small step of ordering SPD officers to ensure that both their names and badge numbers are clearly visible, despite the 2015 recommendation from the Seattle OPA.

Beyond the events of this week, Mayor Durkan has failed to implement meaningful police reform to address police violence, specifically against Black and Brown communities. She collaborated with Donald Trump’s Justice Department in an attempt to lift the consent decree before necessary accountability measures are in place. Over the course of her term, Mayor Durkan has escalated the cruel and wasteful practice of “sweeping” homeless encampments without providing shelter to those who are swept, resulting in the destruction of their belongings and doing nothing but forcing them to camp in another part of the city. She has continued these sweeps in the middle of a public health emergency, against COVID-19 pandemic guidance from the Centers for Disease Control that says: “If individual housing options are not available, allow people who are living unsheltered or in encampments to remain where they are.”

Seattle needs a Mayor who demonstrates a commitment to reforming the police department to end the systemic violence against Black people and the attacks on peaceful protesters. While Mayor Durkan’s resignation will not achieve needed reforms on its own, we believe it is a necessary first step. If Mayor Durkan refuses to resign, we call on members of the Seattle City Council to exercise their powers to remove her. We call on her successor, and all local elected officials, to heed community demands to defund the police, fund community services, and release those arrested during the protests immediately.