Man Crashes Into Barricade and Shoots Protester on Capitol Hill 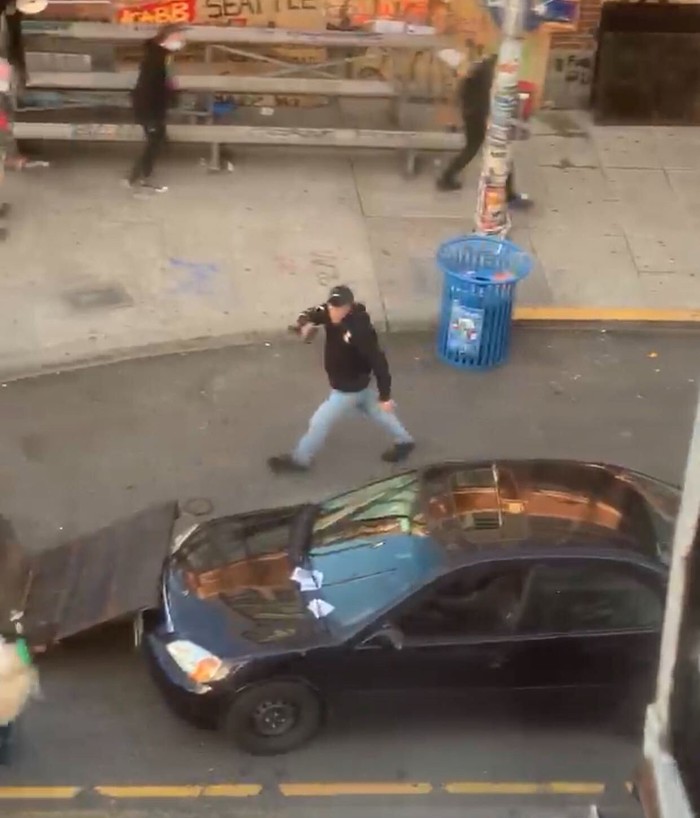 Here's the, uh, "suspect." photo by Marc Castillo
On Sunday evening a man in a black car crashed into a metal barricade on 11th Ave. Demonstrators surrounded the car and started kicking it and punching it. The man appeared to shoot a protester and then exit the vehicle carrying a gun. He then snaked through the crowd toward the frontline barriers separating police from protesters on Pine St.

Over the intercom, the Seattle Police Department said they apprehended the man and the gun.

Seattle Fire responded to a man who had been shot on 11th Ave. They describe him as a 27-year-old man who is stable condition, and who is now in transit to Harborview Medical Center.

Several medics surrounded the victim, who is black, and provided care, applying a tourniquet around his top right arm. The injured guy, reportedly named Daniel, got up and walked down 11th with the support of the medics.

The incident comes on the ninth day of demonstrations against police brutality and for investment in black communities. After several hectic moments, the crowd played the 2004 smash hit by The Black Eyed Peas, "Where Is the Love?" Again.

Lo and Portia, who live on Capitol Hill and in Tacoma, respectively, said this was the first day both of them had demonstrated in the neighborhood. They saw the car "speeding down the street full force" and heard people "screaming to get people out of the way." Lo said they were standing "about five feet" from the car when Daniel and other protesters stopped it. "He could have easily just..." she said, trailing off.

Despite the shooting, both said they plan to return "as much as we possibly can."

"We're trying to figure out how we can help support the efforts," Lo added.

John lives in the neighborhood and said he was in the middle of the block when the man in the car drove down the avenue. He saw Daniel "reaching in the car" to stop the man, and then saw Daniel fall. When the shooter got out with a gun, John ran around to the other side of the car and watched the suspect walk through the crowd.

John said the incident won't deter him from coming to the protests on 11th and Pine again, either. "I mean, it's the neighborhood, I can't [stop]—-even if I don't want to, I still [will]," he said.

Brandon Mulhorn, who was standing "six feet from where [Daniel] got shot" said the swift medical response made him feel safe enough to continue protesting.

Here's the best video of the incident I've seen so far:

A man just drove through a crowd of demonstrators in Seattle and then appeared to shoot someone.

Authorities say the man is in custody, one person shot is in the hospital in stable condition.

Here's the video The Stranger took:

Here's the video from another angle, showing a man in a red and white sweater apparently being shot:

Here's the man running into the arms of the police:

And here's an incredible interview with Daniel from photojournalist Alex Garland:

Story unclear at the moment but young man shot on 11th and Pine. Daniel, 26, wanted to tell his story. With the help of other medics I got a tourniquet on his arm. Street medics were on the spot with gauze and pressure. He walked off the scene. pic.twitter.com/g9Ism58YkF
— Alex Garland (@AGarlandPhoto) June 8, 2020