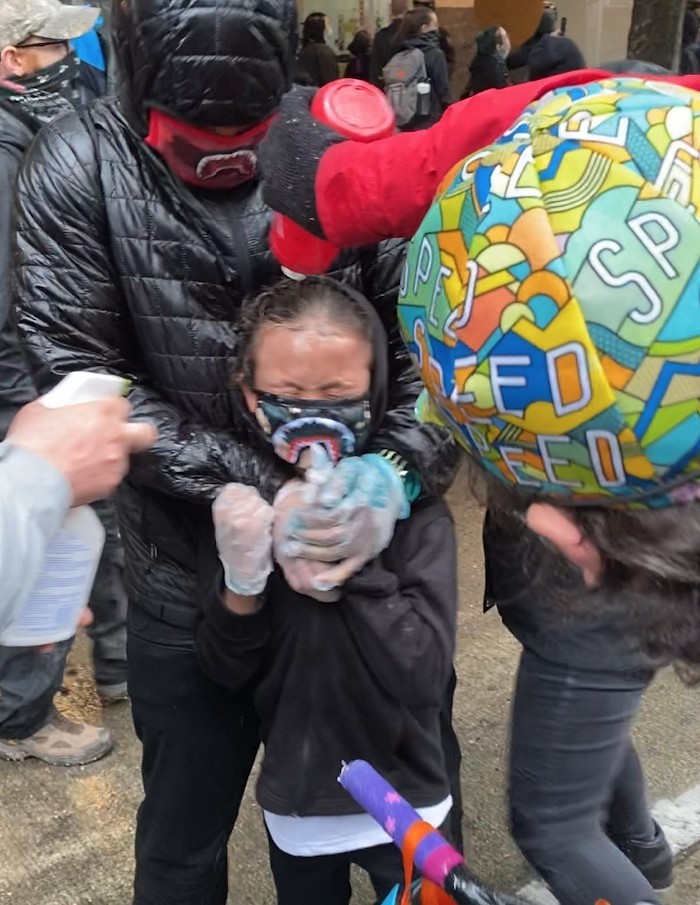 The Seattle Office of Police Accountability said they're investigating the officer involved in this incident, which Evan Hreha documented. SCREENSHOT FROM EVAN HREHA'S VIDEO
Early Sunday morning the Seattle Police Department booked Evan Hreha into jail on suspicion of unlawfully discharging a laser pointer, according to the King County jail register.

Hreha shot the video of a young girl who was allegedly maced by an SPD officer during the second day of protests against police brutality in Seattle.

His mother, Barb, said she was "concerned" about the police arresting Hreha in retaliation for sharing the video, as "he’s never been in any trouble" before.

Barb said Hreha texted her on Saturday evening, around 8:00 p.m., to say he was giving out hot dogs for free to protesters at 11th and Pine. At 1:15 a.m, she said she got a phone call saying he was arrested. Later that morning she got in touch with her son, who told her he was walking home Saturday evening by himself and "all of a sudden he was surrounded" by police. He told her he didn't have a laser.

Over the last few days, protesters have shined lasers at police officers posted at the barrier and on the roof of a nearby building on 11th and Pine.

Simmons said she was on the patio when she saw four police vehicles block off the intersection at Pine St and Belmont on Capitol Hill. Seven officers emerged from the cruisers and "began to interrogate Hreha and started antagonizing onlookers," she said.

As the cops arrested Hreha, one onlooker shouted that the arrest looked unlawful and asked for a name. Hreha spelled it out, introduced himself as the guy who'd shot the video of the maced kid, and said the cops had the wrong guy.

Simmons and Soverns said one man in the crowd then asked if the officers were wearing their body cameras. One officer, who gave his name as Bill Guyer, responded by telling the man he'd "dropped something," when he hadn't dropped anything at all. "The officers were just taunting and instigating. It was pretty awful to observe first-hand intimidation," Simmons said.

Both said Hreha spoke calmly and wasn't resisting arrest. "It seemed like a lot of cops to arrest a hotdog vendor," Soverns added.

A friend of Hreha's, who requested anonymity for fear of retaliation, also expressed some concern about the arrest being retaliatory. On Sunday, this person went to the jail and requested all of Hreha's property so they could use his keys to take care of his dog, who'd been home alone since the evening before. The jail deputy handed over the property in a "sealed plastic bag," this person said, which included "everything except his clothes and shoes."

The source noticed a phone charger but no phone, and asked about it. The deputy said that Hreha must not have had his cell on him at the time of arrest, or that the phone was in evidence.

"I would be surprised if he didn't have his cell phone while he was out," Hreha's friend said. "So I am concerned about the possibility that the police have kept his cell phone because Evan has been widely attributed to be the person who taped the little girl in Seattle after she was allegedly pepper-sprayed by police. It seems odd to keep a cell phone in evidence if the allegation is unlawful discharge of a laser."

Hreha's mother said she texted with him multiple times Saturday evening, so he likely had his phone.

Another potentially weird little wrinkle is that the exact language of Hreha's "charge," which isn't technically a charge but rather the crime police think he committed, changes. Initially, according to an early screengrab taken by a Twitter user, the charge read "unlaw disch lazer 1."

just got booked for “unlawful discharge of a laser” pic.twitter.com/03HREVutgm
— olivia (@gutxigirl) June 7, 2020 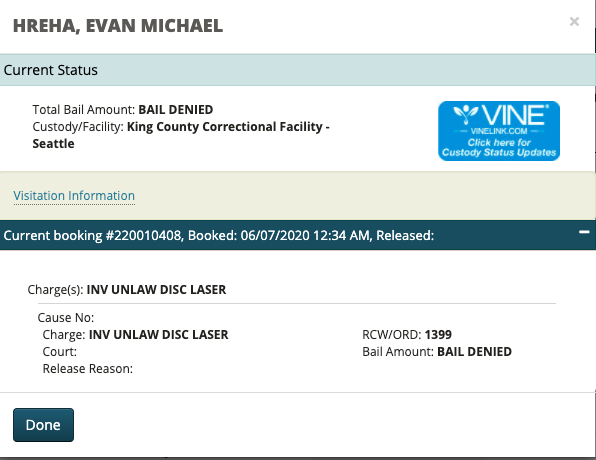 RS
A spokesperson for SPD has not returned requests for comment.

Since the courts aren't open over the weekend, Hreha will remain detained at least until his bail hearing Monday at 2:30 p.m. I'll update this post when I hear more.

Update 2:27 p.m.: SPD will be "sending the case to Seattle Municipal Court for consideration of a misdemeanor charge," according to a spokesperson for the King County Prosecutors office.