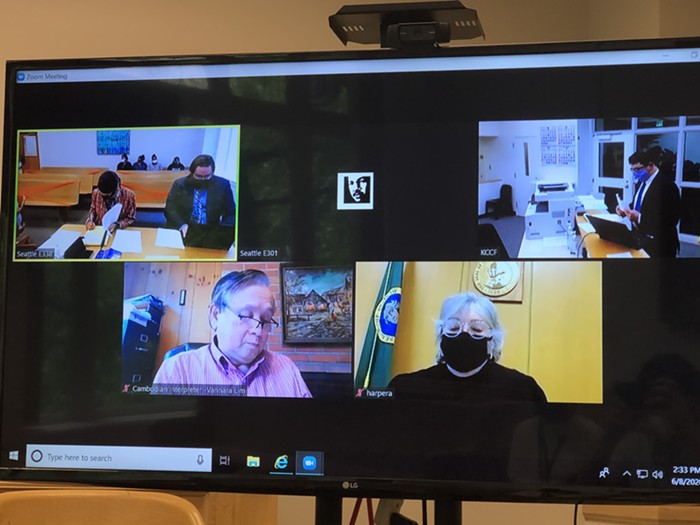 Welcome to the world of virtual hearings. RS
On Monday afternoon King County Superior Court found probable cause to hold Nikolas Fernandez for suspicion of assault in the first degree.
Sponsored

Fernandez, who waived his first court appearance, was apprehended by police Sunday evening after allegedly driving into demonstrators on 11th Ave and shooting a protester named Daniel Gregory, who attempted to stop the car.

King County senior deputy prosecuting Attorney Karissa Taylor argued to hold Fernandez on assault in the first degree with a firearm enhancement, and said that he “sped up” as he drove into the crowd, citing a report Gregory gave to police.

King County Department of Public Defense attorney Jesse Dubow argued that Fernandez was on his way to work at the Nike store downtown, where he’d been “recently” hired “to provide security,” and got “caught going the wrong way down a one-way street.” He said Fernandez was “operating out of fear” of the protesters, who he thought were trying to jack his car, and his “mental state was protective of himself.”

Dubow said that Fernandez, a member of the Iron Workers Union, lived with his wife in Mountlake Terrace and was “not familiar with downtown Seattle.”

Judge Anne Harper noted that a protest had been going on in the area for a while, and that it’s lucky that the case is “just an assault, and not a death.”

She originally set bail at $200,000, but modified that down to $150,000 after a friend of Fernandez’s pleaded for lenience on the bail amount. The judge also mentioned that Fernandez was "marginally employed" and so couldn't afford it.

Fernandez’s friend said he was "a brother to so many of us," and that the courtroom would be filled with people who looked like him if it weren’t for social distancing measures enacted by the court due to COVID-19. He added that Fernandez was “Korean, Puerto Rican, Cuban, Caucasian,” and that his “brother is part of the justice system.”

Fernandez told the police his brother works at the East Precinct.