An Exceedingly Chill Day at the Capitol Hill Autonomous Zone 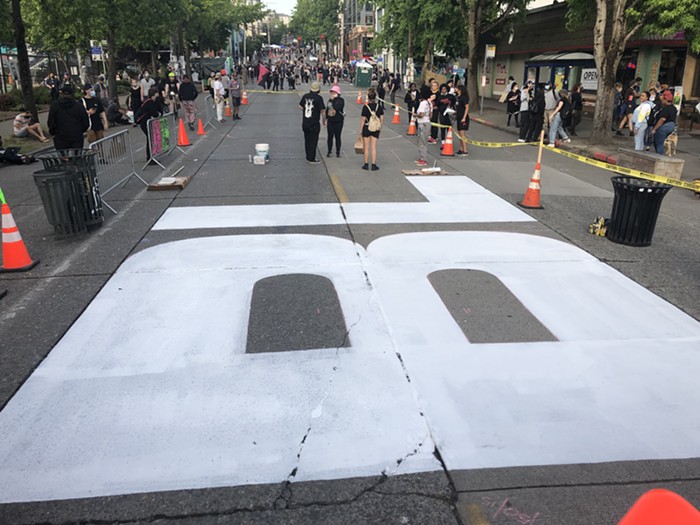 It's getting there. RS
On the first sunny day after a few days of clouds and pissy drizzle, the Capitol Hill Autonomous Zone continued to expand and evolve, organically forming a kind of pedestrian district emanating a lot of chill street fair energies.

Tuesday saw the growth of the No Cop Co-Op (which is currently looking for evening pizza donations, fyi) and an educational film program. On Wednesday, Mutual Aid Books populated a table with free books written by Black and Indigenous authors. Taking a cue from "the other Washington," local painters slapped down primer on Pine Street for a Black Lives Matter mural. Local artists, according to a couple painters on the scene, will color in the letters tomorrow. Someone planted a garden in Cal Anderson. Others listened to speakers in the town square/outdoor cinema on 12th Ave.

In general, visitors and residents milled about, snacking on Dirty Dogs and casually knocking back White Claws. I saw one couple pull down their paper face masks and kiss each other softly beneath the windows of Stranger HQ. It was the first kiss I'd seen in the CHAZ. (If any of you have rounded more bases in the area, please contact Jasmyne and dish.)

But it wasn't all good vibes.

Down in Belltown, a man in a car drove through a bike brigade cycling alongside a youth-led protest, which had begun earlier in the day at Volunteer Park. Cyclists got scratched up and a bike got busted, but otherwise there were no injuries, according to the Seattle Times. You can contribute to the Bike Brigade here.

A white man just tried to run over a group of youth at their protest. I saw him getting into the elevator in his building and confronted him asking “what is wrong with you?” He then walked straight to the WEST precinct saying his car was vandalized and I was accosting him!
— Nikkita Oliver (@NikkitaOliver) June 11, 2020

CHAZ residents also had to contend with two major issues: Shovelfuls of bullshit from the first of what will be many conservative media news cycles, and the internal question of what the hell they wanted to do with the East Precinct.

The difference between representations of CHAZ in conservative media and the reality on the ground couldn't be more stark—unless you're Tim Eyman or TV News, but we'll get to that.

As I'm sure you've heard by now, someone told the President about the Capitol Hill Autonomous Zone—I'm looking at you, Kilmeade. Or maybe he caught the segment on Republican state media: "It's not a violent takeover, but it is an indication of where the Democratic party is headed," argued one Fox News commentator. WE WISH, BUD.

Whatever the case, the news prompted Trump to send one of his classic authoritarian Tweets, complete with a hilarious typo:

Radical Left Governor @JayInslee and the Mayor of Seattle are being taunted and played at a level that our great Country has never seen before. Take back your city NOW. If you don’t do it, I will. This is not a game. These ugly Anarchists must be stooped IMMEDIATELY. MOVE FAST!
— Donald J. Trump (@realDonaldTrump) June 11, 2020

Resistance Jenny took 15 minutes to capitalize on the moment, telling Trump to go back to his bunker. She'll be the only executive sanctioning militant responses against her own constituents in this town, thank you very much!

Governor Jay Inslee, who claimed he'd never heard of CHAZ before today, delivered another of his dad jokes.

A man who is totally incapable of governing should stay out of Washington state’s business. “Stoop” tweeting. https://t.co/O6i04qmZ9v
— Jay Inslee (@JayInslee) June 11, 2020

As we all know, real governing is activating hundreds of National Guard troops at the request of a Mayor in an attempt to squash a movement dedicated in part to demilitarizing police, if not abolishing departments altogether.

CHAZ community safety volunteers who were posted up at the barricades denied anything of the sort. One told me they had asked a couple work crews with the city to print a credential and put it on the hood of their car so they could see it. Otherwise, they say, they've just been chatting with drivers who want to pass: "Hey, how are you? Do you live here? OK, let's get you in."

The security guy encouraged everyone to visit and to patronize local businesses in the area, some of which have been closed for the last two weeks. "We want the community to run exactly how it has been, just without a militant police presence," he said.

Nobody appears to be charging local businesses any fees to operate within the zone, either. "Fees to enter?" said one safety advocate on a bike. "No, this is an autonomous zone. That doesn't fly. That goes against everything an autonomous zone stands for." Capitol Hill Chamber of Commerce business development manager Christina Arrington told Seattle Times reporter Katherine Long she hadn't heard of businesses being charged fees, either.

Republican gubernatorial candidate Tim Eyman showed up and did a loop. He was chanted out in the CHAZ way, according to video by The Daily's Jake Goldenstein-Street.

One CHAZ resident also shouted at a news crew that identified itself as CBC news. "Who do you work for?! Who do you work for?!" the CHAZ guy said, standing behind the anchor, who later claimed he had identified himself as a CBC reporter. As the crew quickly wrapped up and packed up their gear, the cameraman told the resident to "get a job." The resident claimed one of the security guards put his hands on him, which had escalated the situation.

They were not CBC reporters. They were filming a segment for Tucker Carlson Tonight, and they repeated without evidence the claim from police that security had been checking IDs.

Aside from the horrific incident of the man driving into a youth-led protest, all of this was largely a distraction from the real work of the movement, which happened earlier in the afternoon at the CHAZ's first Town Hall.

The goal was to hear speeches from local Black and Indigenous leaders, and then to break up into small groups to brainstorm ways to address concerns about trash, traffic, helping small businesses, establishing accountability structures within a non-hierarchical social arrangement, and whatever else came up. Organizers ended up canceling the group sessions in favor of hearing from more speakers.

Speakers welcomed support from members of the autonomous zone and commended the group for building a community around the East Precinct. But the general consensus among the Black leaders seemed to be something like: Okay, so most of you seem to want to turn this police station into a community center? Good luck with that!

How CHAZ goes about doing that—if that is what they want to do—is still up in the air. And with the cops already saying they want their building back, it's unclear how long they'll have to figure out a plan. Many in the group remain wary of the path Seattle City Councilmember Kshama Sawant is offering into City Hall, and the leadership structure is still pretty rhizomatic. That leaves plenty of stuff to think about at the next town hall, which is scheduled for 3:00 p.m. in the square on 12th tomorrow.