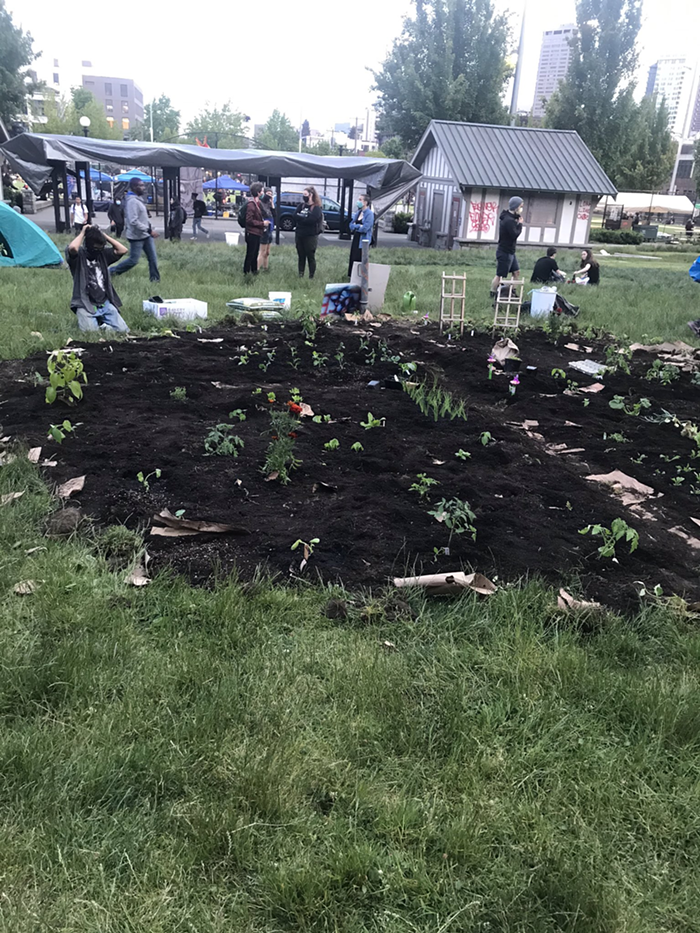 As Trump wrote last night on Twitter: “These ugly Anarchists must be stooped IMMEDIATELY.” Nathalie Graham
Did you hear the latest rumor? According to anonymous sources, Seattle Police Assistant Chief Deanna Nollette has ordered the word “gullible” to be removed from all dictionaries in a six-block radius around news stations.

Just kidding, no she didn’t. But she DID say that the police are getting “anecdotal” reports of armed ID checkpoints and extortion around Capitol Hill. Her word was good enough for KOMO, Fox News, and a handful of other blogs (along with several hundred Twitter users whose profile pics feature wrap-around sunglasses), all of whom repeated the rumor without asking, “wait … is that true?”

If the prospect of armed stop-and-frisks within the CHAZ seems too terrible to be true, that’s probably because it is. Take a stroll around the neighborhood right now and you’ll find some (slightly haphazard) community gardens, chalk art on the pavement, and probably someone playing a guitar. There was music and dancing. Businesses are open, albeit on a limited basis due to coronavirus.

And get this—the police are still in the neighborhood, doing routine police stuff. Last night I watched two cops deal with a person who had passed out on Broadway. They prodded her and asked “you wanna go to detox?” until medical professionals arrived. (Obviously, we should be funding social workers to take care of these kinds of problems instead of cops!)

I reached out to the SPD for comment on the allegations. The first media number listed on their website has been disconnected since January; the second goes to voicemail and I’m not exactly holding my breath to get a callback. The SPD used to make their 911 call logs publicly accessible, but they seem to have stopped updating it a few months ago.

I also submitted a request for any records related to extortion on the Hill. Expected response time for my request, according to the SPD: six to twelve months.

But just think about this for a moment. The Assistant Chief of police says they’ve heard “anecdotes” about armed gangs roaming the streets, and mafia-style shakedowns of local businesses? Anecdotes? Is that what the police are in the business of, hearing rumors and then going “damn, that’s crazy”? They don't have any, you know, evidence? Or is that just a thing TV cops do?

I get why conservative news wants to paint the CHAZ as some kind of disastrous Mad Max state. Obviously, those writers don’t really care about the safety of a six-block zone on Capitol Hill, they’re just looking for any story that justifies their boot-licking. And if that story isn’t true, oh well, they’ll repeat it anyway.

(Hilariously, some conservatives are passing around an anonymous Reddit post as proof of a breakdown in CHAZ leadership. That post is actually just a slightly-reworded transcript of the “anarcho-syndicalist” dialogue from Monty Python and the Holy Grail.)

Look, maybe extortion actually is happening. It’s not impossible. It’s also not impossible that the extortionists, if they exist, are cops. So far, the most compelling evidence of wrongdoing seems to be an anonymous comment on a blog—is that the only thing the Assistant Chief is going off of, something she read online? Because I’m writing a blog right now, and I can write “armed guards wouldn’t let me use the bathroom in Cal Anderson park until I French kissed a telephone pole,” now is that going to wind up on Fox News in a few hours?

Anyway, here’s a helpful hint for my colleagues at other news outlets: I have a friend who works with people experiencing long-term mental illness, and sometimes he’s found that the stories they tell can be hard to understand. On those occasions, he’s learned, it can sometimes help to ask, “Is that something that’s true? Or something that’s fun to imagine?”