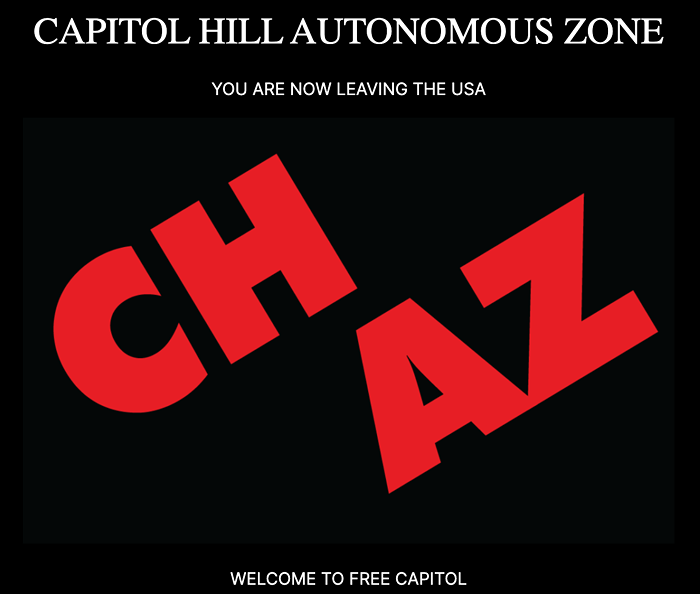 Gimme dat red and black font, baby. Screenshot of caphillauto.zone
Capitol Hill Pride calls for the East Precinct to be turned into a community center: On their petition, they say they believe a community center with outreach services, especially for youth, would be "ideal and benefit the public," asking Durkan and the city to consider the East Precinct to be "restructured as a safe protected place for community use." You can sign their Change.org petition here.

Seattle Police Department Chief Carmen Best, along with other SPD officers, toured the hastily emptied precinct today for the first time since the six-blocks surrounding the building were deemed the Capitol Hill Autonomous Zone. The tour was to assess the damage of the precinct, reports CHS Blog. The day was peppered with interactions with police and CHAZ residents, resulting in some moments of tension and discussions around whether or not to lock the officers inside:

Sorry, they’re in there. Just needed to look up. pic.twitter.com/MvAJJTyEOO
— Chase Burns in the CHAZ (@chaseburnsy) June 11, 2020

Also this blew my freakin' mind: SPD walked back claims that CHAZ residents were trying to extort local businesses for money after mentioning it in a press conference on Wednesday. The claim seems to have been sourced on "conservative blog The Post Millennial, in an article written by former Seattle City Council candidate Ari Hoffman," reports Seattle Times. So, SPD reads Hoffman?

Lady Antebellum drops "-ntebellum" from their name after "realizing the word's association to slavery," reports CNN. They will go by Lady A, a long-used nickname by their fans. Let this be a lesson to always look up the implications of a word before keeping it in your band's name for *checks notes* 14 years.

East Coast media has been having an intense and much needed reckoning with how pervasive racism is amongst its ranks in the past two weeks: Vulture's Justin Curto compiled all the tea here, from who has resigned to the reasons why. The protests that have been organized in response to the killing of George Floyd by a white police officer have encouraged writers of color—specifically Black writers—to speak out about their experiences with racism in the industry and call for substantive, structural change.

CHAZ gets its own website and it's eerily reminiscent of the early internet. "You are now leaving the USA. Welcome to Free Capitol," the landing page reads as CHAZ is written in bold red at the top. On the website, you'll find links to a list of demands, pictures from "around the commune," frequently asked questions, and even a LIVESTREAM of the 11th and Pine intersection. CHAZ has logged on, y'all.

“These ugly Anarchists must be stooped IMMEDIATELY.” pic.twitter.com/rNFFgyLORO
— Chase Burns in the CHAZ (@chaseburnsy) June 11, 2020

We have our own little livestream set up: Check it out here.

Trump campaign extends a long middle finger to the Black community: In an extremely pointed move, the president's first in-person rally since the beginning of the pandemic will be held on Juneteenth (a holiday celebrated by Black people on June 19, commemorating the end of slavery) in Tulsa, Oklahoma (the site of the largest massacre of Black people by white people in 1921 in a neighborhood known as "Black Wall Street"). Apparently, there's also a COVID-19 warning to all Trump rally ticket buyers, stipulating that you can't sue Trump if you get the 'rona.

The University of Washington waives its SAT/ACT requirements for application: UW says it has found "little correlation between test scores and success at UW." No duh. This comes after the university temporarily suspended test score admission requirements after the standardized tests were canceled due to the coronavirus.

A new model by UW predicts that the second wave of COVID-19 could hit sometime in mid-September: Just in time for fall. This new analysis factors in data through June 6, accounting for increased movement over Memorial Day weekend, protests, and more lax restrictions across the nation, predicting the U.S. death toll will hit 169,890 by October 1.

Speaking of fall... State schools chief Chris Reykdal announced today that he expects school districts to be open to in-person classes next school year, "as long as public health guidelines allow them to do so," reports the Seattle Times. He also dropped a 55 page document illustrating what school learning could look like in autumn. Fingers crossed!

Here's an aerial view of the "Black Lives Matter" mural that was painted last night between 10th and 11th on Pine: I'll be writing more about it tonight.