An Estimated 60,000 March in Silence for Black Lives 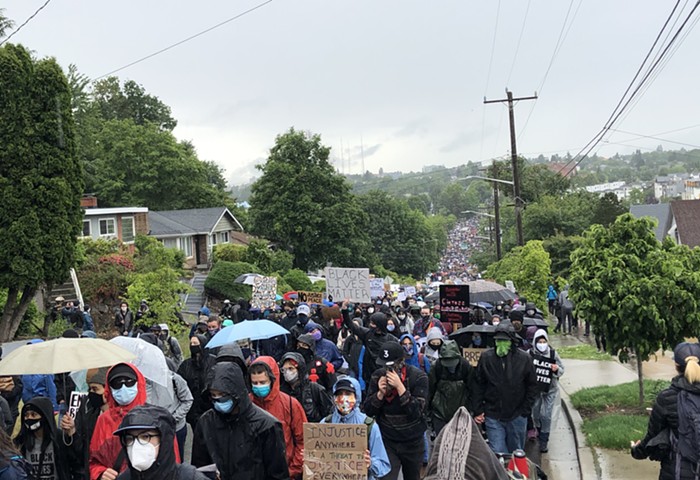 The only sounds you could hear were raindrops falling on umbrellas, determined footsteps, and, occasionally, the endless chopping of a fucking helicopter. RS
A little rain (okay, a lot of rain) didn't stop an estimated 60,000 from gathering at Judkins Park on Friday to participate in a statewide silent march and general strike organized by Black Lives Matter Seattle-King County (BLMSKC). Marchers were still leaving Judkins as the first wave broke on Jefferson Park, nearly two miles away. One participant witnessed marchers already returning from Jefferson as others were just leaving the starting point.

BLMSKC kept the march silent, organizers said, out of respect for the Black lives killed by police, and to decrease the risk of COVID-19 transmission, which has disproportionally hit Black and Latinx communities.

"Let your silence speak volumes for those we have lost,” one speaker said as the group quietly filed out to march this afternoon. BLMKC board members quietly leading the way down 23rd. RS
Steady rain and steep hills aside, the solidarity in silence was a welcome reprieve from two weeks of loud-ass protests against police brutality, some of which had been met with a violent and sustained police response, heavily armed citizens, and, in the case of the conflicts on Capitol Hill, an active shooter. Jordan drove over from the east side. RS
An endless stream of images and video showing police deploying chemical weapons against mostly peaceful protesters spurred Jordan, a 29-year-old who lives in Redmond, to take to the streets for the first time in his life. He said the demands BLMSKC issued to the city last week—which include defunding the police by 50% while investing $100 million in the Black community, ending the school-to-prison pipeline, and demilitarizing departments, among others—are "sorely needed."

"Over the past two weeks we've seen so many acts of violence against protesters, a lot of them peacefully protesting," he said. "The police just have a tendency to escalate. When they have all this riot gear, tear gas, pepper bullets, and rubber bullets, they're going to use the tools they have at hand. So if we can get those tools out of their hands, then we can more effectively protest, and we don't have to see people getting their eyes shot out, or people getting brain damage like those people in Austin."

"The silence was also a really powerful idea," he added, "Just marching down the street and letting the bodies speak for themselves."

(L-R) Kammil, Trinity, Chris. RS
A trio of 19-year-olds—two from Covington and one from Seattle—say they've demonstrated in a couple protests over the last few weeks.

Kammil said the silent march was "very calming," and it reminded her of "how much power we have when we act as one."

"At other protests, the police felt overpowering," Kammil added. "They were like a ticking time bomb—you never knew what they were going to do at any moment. So it's nice that you're not really seeing them here."

Chris, who was downtown when the chaos broke out on May 30, said cops dispersed the crowd at Westlake "for no reason."

"It was like—a pastor was giving a sermon, and the next thing you knew there was tear gas," he said.

When cars started burning, he said his friends of color asked if they could huddle around him, thinking his whiteness would protect them. "That put everything in perspective for me," he added. "Definitely life-changing."

For Trinity, the silent march showed that "there's different ways to get the point across." After finally getting more than two hours of sleep last night, Marshall showed up ready to expand the movement. RS
Marshall, the 28-year-old frontman for the Marshall Law Band, which jammed long into the night during the Capitol Hill protests even as police fired rubber bullets and tear gas into the crowd, could not have agreed more. After two long weeks of playing music and helping to organize the Capitol Hill Autonomous Zone, he also welcomed the afternoon's contemplative hours of silence.

"The work isn't done but the ball is rolling [at CHAZ], so we need to get out here to see what other people are doing and find ways to spread the message to other communities," he said. "Good things are happening, but if CHAZ is your only form of activism, you're doing it wrong. You have to learn how to disrupt in every other place whenever you can."

Marshall supports the demands of BLMKC, but said the public needs more education on what "defunding police" means.

"What that means is the police don't need to show up with a gun when there's a nonviolent crime occurring in a community they don't understand," he said. "Let's pay somebody else to do that."

"A lot of problems the police deal with are also systemic problems that come as a result of a lack of funding in the community," he continued. "If we take that funding and put it into the community, those problems won't exist at the same rate, and the police will have an easier job. We're really trying to make their job easier so they stop killing people." Lavender Rights Project is a law firm that specializing in serving “trans and queer low-income people and other marginalized communities.” King County Equity Now aims to combat years of gentrification by building Black capital through land acquisition and public investments in community programs. On Friday the Seattle Department of Neighborhoods committed to transforming Fire Station 6 into the William Grose Center for Cultural Innovation, meeting one of those demands.

Responding to demands from BLMKC, Mayor Jenny Durkan agreed “to invest up to $100 million in community priorities," but said she won't be defunding the police by 50% to do it. "She wants to have a further conversation about some investments that are currently in the SPD budget including de-escalation teams, street outreach, crisis intervention teams, and mental health diversion teams and reinvestments in housing and education," a spokesperson for Durkan said.

Today a federal judge also granted a Temporary Restraining Order to BLMKC and other plaintiffs on a case brought by the ACLU (including Nathalie), preventing cops from deploying chemical agents on protesters unless they really want to. The judge issued the order after finding evidence that the Seattle Police Department "used excessive force and violated the free-speech rights of thousands of protesters," according to the Seattle Times.