CHOP Residents Are Working Out a New Footprint With the City 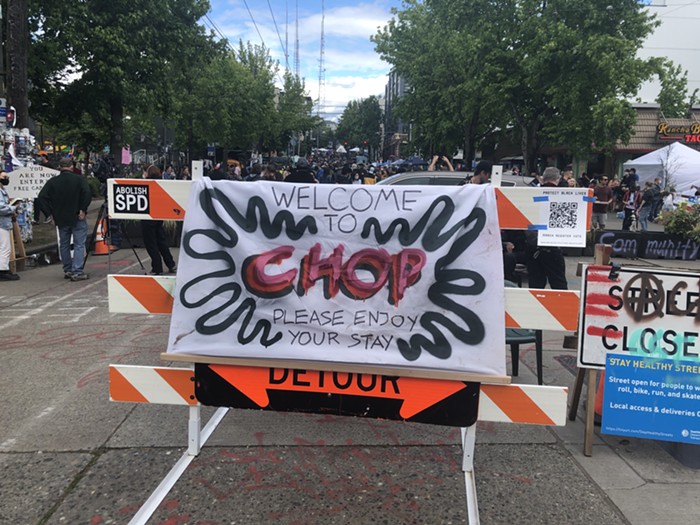 CHAZ is going through some ch-ch-ch-ch-changes RS
On Sunday morning residents of the protest zone around the East Precinct on Capitol Hill met with the heads of city agencies to continue discussions on the site's footprint, and to address concerns about getting vehicles in and out of the area quickly.

Seattle Fire Chief Harold Scoggins, one of the few public leaders who seems to have earned the trust of CHOP residents, led the meeting. He was joined by Seattle Public Utility CEO Mami Hara and Seattle Department of Transportation director Sam Zimbabwe. Converge Media and Future Crystals ran livestreams.

Cove said CHOP's current borders present fire concerns, and added that working with the city to manage "thousands of dollars of infrastructure" will "look very good" for the movement. As night security in CHOP is thin on the ground, Cove argued that a smaller perimeter would be easier to control.

Zimbabwe distributed two proposals for new configurations that would reduce the size of the area and clear paths for emergency vehicles, delivery drivers, and residents and business owners who needed to access their buildings.

The protesters were amenable to negotiations, but seemed to prefer one proposal much more than the other.

Shannon, one of the Capitol Hill Organized Protesters, showed me a copy of one SDOT proposal and a drawn copy of the protester's preferred proposal.

One option from SDOT allows thru traffic on 11th and 12th Avenues, limiting CHOP's street presence to a block of Pine. During the meeting, Shannon said this layout would create a "kill zone" that would make protesters vulnerable to cars, active shooters, and police looking to arrest a bunch of people. 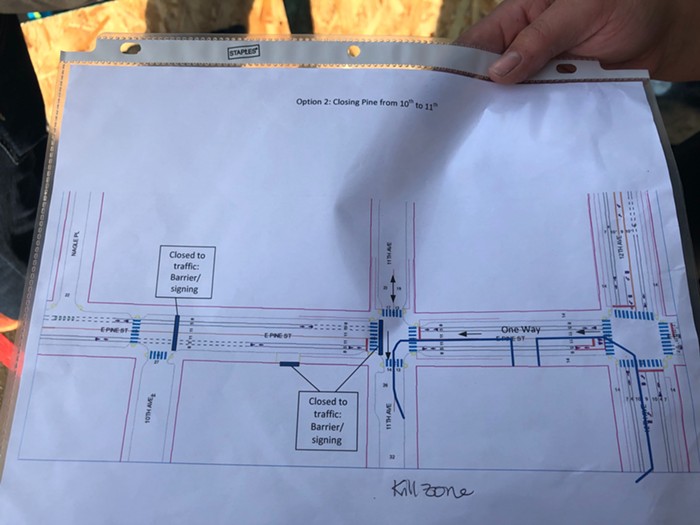 As you can tell from her note, Shannon thinks this plan would create a "kill zone." RS
Protesters showed KIRO's Deedee Sun the other proposal, which would block off Pine completely between 10th and 11th Avenues, and block half of Pine from 11th to 12th Avenues, allowing for one way traffic westbound from 12th to 11th.

#UPDATE: Security from #CHAZ / #CHOP protest zone tells me they’re working with Seattle Fire, SDOT, and Public Utilities to change up some of the protest areas/ barricades and where emergency vehicles are allowed.

Zimbabwe said these two options create "access to all buildings and businesses that are necessary." I asked SDOT and SFD for a copy of both proposals, but they didn't send them to me. I'll update this post when I hear back.

On Sunday evening Shannon told me this hand-drawn map represented her preferred proposal, which would block off parts of 11th and 12th Avenues, including any access to 12th north of Pine. Shannon told me this was her preferred proposal. RS
A spokesperson from the city's joint information center said city leaders have been meeting "daily with CHAZ/CHOP leaders to work with the organizers on sanitation, hygiene, and any other needs since June 9," and added that "any updated footprint to facilitate more access would be done in agreement with CHAZ/CHOP organizers and would ensure CHAZ/CHOP residents can continue to protest peacefully around the East Precinct while allowing deliveries, sanitation and easy access."