Here's How You'll Take the New Train to Mercer Island in Three Years, and You WILL Take That Train 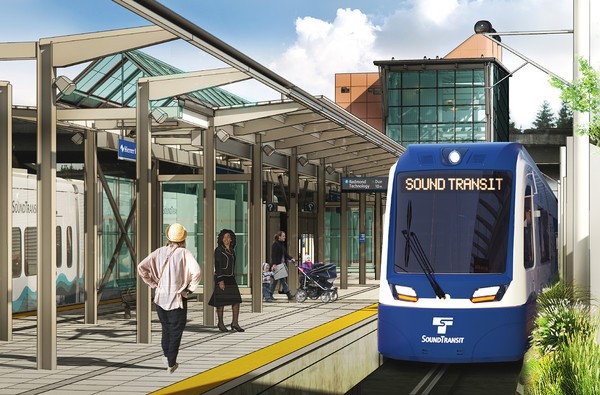 Perhaps you are like most Seattle residents, in that the only time you think about Mercer Island is when you’re heading to Bellevue and you’re like “ah, here we are,” and then you’re like “oh no wait, this is just the blob of land before Bellevue.”

But Mercer Island is more than just a highway trench, and when the new station opens in 2023, it’ll be easier than ever to find yourself beguiled by its charms.

The new designs show a pleasant little transit plaza currently known as the MITI, the Mercer Island Transit Interchange. (Can someone find a word that starts with Z to put in there so we can call it The Mitzi?)

Situated just over the I-90 scar, the plaza will have some nice foliage around a light rail station, with bus connections and bike lockers and like, you know, transit stuff. They’re also planning some bike and pedestrian improvements in the blocks around the station.

So why should you, a sophisticated city dweller, care about some sidewalks out on some island? Because Mercer Island is in fact a charming little getaway, and the new light rail will make it easier than ever to enjoy a little island exploration.

Consider, for example, Mercer Island Town Center, an adorable little small-town strip of shops, restaurants, and cafes. There’s a cute cozy bookstore, a charming farmer’s market, and as it is mandatory to eat fudge whenever visiting an island, you’ll be happy to hear there are MULTIPLE candy stores and bakeries. If you need a day where you just stroll around a little neighborhood and sigh “this is nice” to yourself, this is the island for you.

And then there’s the parks! They are startlingly lovely! Luther Burbank Park has a boat dock and pier, swimming area, barbecue pits, and trails; and it’s huge, with gorgeous views of the lake and east side. Bike accessibility is, at the moment, generally disappointing, but there’s a loop around the whole island that’s not unpleasant.

Yes yes, there is a certain undesirable element to be found on the island: The place has a reputation for being where rich people live, and you know what they say about rich people and camels. But when light rail opens in 2023, Mercer Island will suddenly be just another stop on the rail line, making the place more accessible to more people than ever before.

Go give Sound Transit your thoughts now, so you can enjoy a lovely stroll around the island — or perhaps something more active — in a few years.