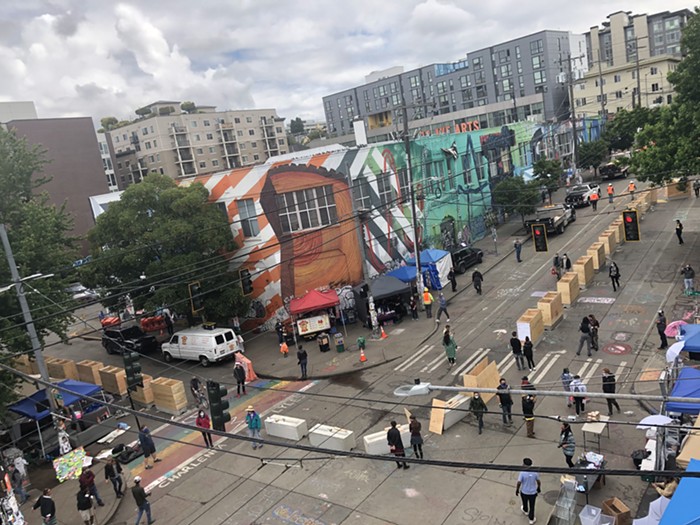 A little over a week ago the intersections around 12th & Pine and 11th & Pine were choked with tear gas. Police brutality protesters were holding a line against a well-fortified phalanx of armored Seattle Police Department officers and National Guard troops, who seemed content to continue gassing the neighborhood.

Now, after fruitful conversations between residents and the city over the last few days, the Seattle Fire Department, Seattle Public Utilities, and the Seattle Department of Transportation are removing the old flimsy barriers at the intersections and installing concrete barriers wrapped with particle board up and down Pine, 11th, and 12th. Honey Buckets are being rearranged. The No Cop Co-Op is moving down the street a bit.

All of this is being done, according to a blog post from Mayor Jenny Durkan's office and some of the residents I spoke with this morning, to clear a path for emergency vehicles and local business owners/residents, and to create a safer area for protesters to continue demonstrating.

In a blog post, a spokesperson for Mayor Jenny Durkan's office laid out the official layout:

The area adjacent to Cal Anderson park on Pine between 10th and 11th will remain closed. This street is now home to the Black Lives Matter street art.

A top priority for community access is opening 12th Avenue, a City arterial road, which typically carries more traffic. Under these changes, 12th Ave will become one way on the south side of Pine St in order to accommodate a protest zone in the west lanes and allow access and movement of vehicles in the east lanes. An alley access zone was also set up on the South side of Pine between 11th and 12th to allow for apartment building access.

SPD will limit its response in the area to "significant life-safety issues," the spokesperson writes in the blog. Some examples of life-safety issues include "an active shooter incident, an assault, a structure fire, significant medical emergency (i.e. heart attack, stroke, trauma) and other incidents that threaten a person’s life safety."

Shannon, a CHOP resident who was critical of one of SDOT's working proposals, said she's enjoying the new configuration. "I feel a lot safer now that a vehicle isn't going to come up and run me over on the sidewalk so easily," she said, mentioning a few recent local incidents of drivers barreling into peaceful protesters. That sense of safety, she believes, will facilitate the movement's "big group project" of ending systemic racism "today instead of tomorrow."

Cove thinks the new cement barriers will keep protesters and everyone else safer, which addresses a concern of his barrier sentinels, especially the overnight crew, who felt as if they were "sitting ducks."

"We're tightening up our footprint just a little, getting a buttload of infrastructure that's going to keep us safe and keep vehicles out, and hopefully make the protest itself a lot more sustainable," Cove added.

He also hopes working openly with the city will "squash" the false notion that the protesters are part of a separatist movement. The word "autonomous" in one of the original names of the area, the "Capitol Hill Autonomous Zone," fed into the right-wing ideology that protesters wanted to secede from the union, Cove explained. That message, amplified by the President and right-wing outlets, attracted gangs such as the Proud Boys and random gun-toting suburban nutjobs, which has presented a security problem. "For right-wing optics, it's going to be really hard to call us a separatist movement when we're right here working hand-in-hand with our city," Cove said.

Update: 2:24 p.m. Doesn't look like they're 100% there yet, according to a reporter for the local Fox affiliate:

SDOT got chased off just now. Protesters started feeling like the barriers are not what they envisioned or agreed to and they want a new plan. Fire Chief Scoggins came out to see what is the issue, we’ll be hearing from him this afternoon. #Q13FOX #CHOP pic.twitter.com/3ED73sWpFJ