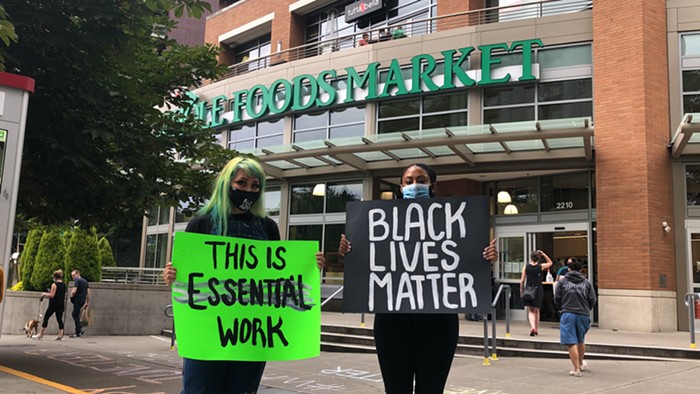 Alicia Murillo, left, says she and coworkers were asked to leave work after they wouldn't take off their masks that read "Black Lives Matter." Courtesy Alicia Murillo
Friday afternoon, workers at the South Lake Union location of Whole Foods say they put on their required personal protection equipment. Except, they had written Black Lives Matter on their masks. This was unacceptable to Whole Foods management, according to workers.

Workers say they were asked to remove their masks or they'd have to leave work. Management has asked at least five workers to leave, workers told The Stranger. According to one worker, management compared having "BLM" written on masks to the Confederate flag. UPDATE 8:45 pm: In a statement to The Stranger, a Whole Foods spokesperson denied that a manager compared a mask with "BLM" on it to a mask with the Confederate flag. The workers were offered masks that did not say Black Lives Matter, according to the spokesperson.

“In order to operate in a customer-focused environment, all Team Members must comply with our longstanding company dress code, which prohibits clothing with visible slogans, messages, logos or advertising that are not company-related," said the spokesperson.

Leadership at wholefoods wsl/slu compared BLM to the confederate flag and is now kicking out TMs that refuse to take off their BLM masks. Come down to protest y’all
— alicia 🌙 (@0ldgrxy) June 19, 2020

Alicia Murillo was one of the workers who says she was "kicked out" of the store. She says she was called back to her manager's office once someone noticed her mask. She bristled when her manager—who said she was "just the messenger" from corporate and asked her not to "shoot the messenger"—told her that the mask was a "dress code violation" because workers are not supposed to wear anything "controversial," Murillo says.

The Whole Foods spokesperson said that no one was kicked out. However, Whole Foods team members are not able to work their shift if they do not comply with the dress code, according to Whole Foods rules. Multiple employees told The Stranger that they were asked to leave. Only workers who accepted new masks were able to work the rest of their shifts.

Murillo's coworkers say they pointed out to management that they had a Pride flag in the store—Whole Foods could support Pride but it couldn't support Black lives? A manager asked Murillo's coworkers if they would like the flag to be taken down "out of solidarity for Black Lives Matter," Murillo claimed.

The Pride flag was allegedly taken down.

"The fact that it’s Juneteenth of all days and they're not allowing us to wear these things is absolutely insane to me," Murillo said.

People are gathering outside the store & chalking the sidewalk now. Come stand with these workers if you can! Or call the store & let management know how you feel! #BlackLivesMatter pic.twitter.com/8zyc7vYXWz
— ufcw 21 (@UFCW21) June 20, 2020