The Eyes of George Floyd in CHOP Spotted on one of the concrete barricades on 12th and Pine. JK
Since the concrete barricades have been installed in and around Capitol Hill Organized Protest (CHOP), the surface area for graffiti and art has grown. Over the past week, the new barricades have been decorated with pictures of Black and Indigenous victims of police and white supremacist violence like Breonna Taylor, Ahmaud Arbery, Sandra Bland, and Stonechild Chiefstick as well as murals dedicated to the message, "Black Lives Matter."

But a figure that keeps recurring on both the barricades and on surfaces around CHOP more generally is George Floyd, the unarmed Black man killed under the knee of a white police officer on Memorial Day. Across a wide variety of mediums—stencils, posters, signs, stickers, murals, pictures—Floyd's face is part of the visual fabric of the protest's now-three-block radius.

Of all of these images of Floyd, perhaps the most striking—to me—was one I spotted this weekend, of just his eyes. 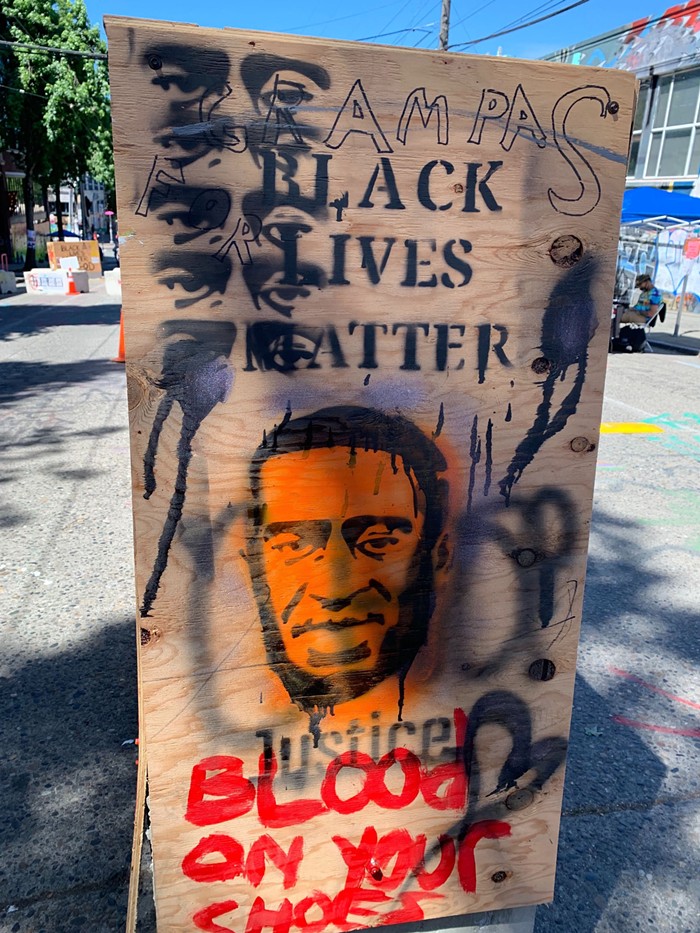 The eyes are taken from a fuller stencil of Floyd's face that has popped up around CHOP. On one of the barricades on the eastern-most edge of the area, in addition to Floyd's full face stencil, the anonymous artist decided to spray paint just his eyes over and over, creating a river of his pupils. The eyes show up again on other barricade murals, turning the truncated stencil into a sort of tag.

When I'm inside CHOP, I feel like I'm being watched—by the nation, by police, by the government, by history, by those we are fighting for. The whittling away of Floyd's other features, leaving just his eyes, seems to underscore that idea: Floyd is present, here, watching over us. It's a centering and arresting reminder of the reason this protest came together, as well as the work that needs to be done to achieve the demands that are keeping the space intact.