Slog AM: Seattle Sued by Capitol Hill Residents and Businesses, Fire in the C/ID, Supreme Court Sides with Trump 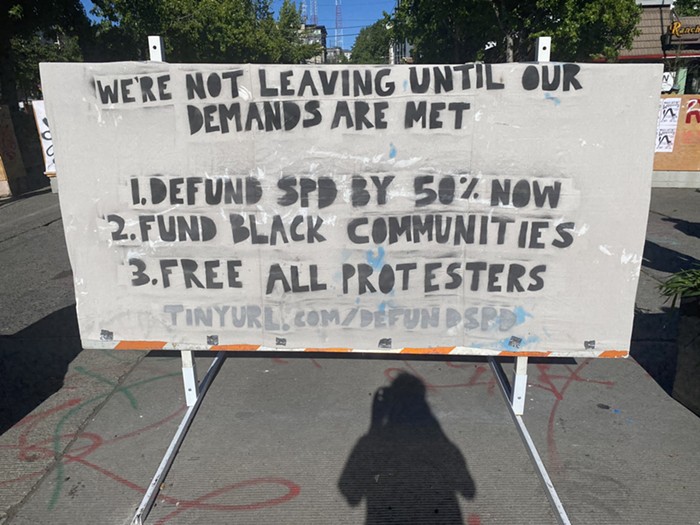 Some Capitol Hill residents and businesses are suing the city over their handling of Capitol Hill Organized Protest. JK
Despite intensity of the coronavirus outbreak in their county, some Yakima prisons guards are still not wearing masks: In the past week, 40 inmates have been diagnosed with COVID-19 at the Yakima County jail, causing some to worry about the health and safety of incarcerated people who are among the most vulnerable to infection.

Bill's Off Broadway is closing forever: CHS Blog has the scoop. Though they've weathered development waves and a two year construction hiatus, COVID-19 is what ultimately took out the beloved pizza place and sports bar. "We have loved being a piece of this vibrant community and are devastated to not be a part of it going forward," the restaurant wrote on Facebook. "Thank you for being part of our family."

2-alarm fire in Chinatown/International District this morning: Located on the 800 block of South Weller Street, there have been no reported injuries and the fire is now reported to be under control but local businesses and residents are being asked to close their windows to prevent smoke inhalation. KIRO 7 reports Seattle Fire Department has called the cause of the fire under "high suspicion" as they've seen more than 10 intentionally set fires in the bast 48 hours.

Flames have burst through the roof @ Seattle CID fire as @SeattleFire tries to get this fire in a commercial building under control we are live @ 800 S Weller Chinatown International District @KIRO7Seattle pic.twitter.com/LwWa4Dc1PH
— Ranji Sinha (@RanjiKIRO7) June 25, 2020


We are living in a dystopia: The New York Times goes deep on the story of a Black man in Detroit who was arrested for a crime he didn't commit after facial recognition technology misidentified him, the first known case of its kind.

The city of Seattle is getting sued over their handling of CHOP by Capitol Hill businesses and residents: which include Sage Physical Therapy, Tattoos and Fortune, Car Tender, and Northwest Liquor and Wine. Though they "stand with the Black Lives Matter movement and support demonstrators’ right to free speech and assembly," according to the Seattle Times the plaintiffs of the class action lawsuit say the city aided CHOP residents by "providing them with stronger barriers, public restroom facilities and medical supplies." This made it more difficult for these residents and businesses to go about their daily lives and schedules where they don't have to think about Black people getting systematically murdered by the police. They also say they feel unsafe on the Hill, citing intimidation from protestors and the police's lagging response times to complaints and shootings in the area.

This could become a big deal for the city and Capitol Hill: If the lawsuit is able to establish a class—which could number "in the thousands"—Seattle could be on the hook for tens of millions of dollars. Kevin Schofield at SCC Insight has published the lawsuit in full and has a good break down of its allegations and ramifications. As an aside, my naive hope is that if these plaintiffs win money from the city, that it go back into the Black community. Fat chance.

Last dry weekend in Seattle, May 9th and 10th ( high 85° both days ). Looking like every weekend in June will be wet with showers in the forecast for this weekend. In the meantime a couple of sunny warm days after some morning low clouds and fog. Highs 70s to lower 80s. #wawx pic.twitter.com/FEpPYsKX2I
— NWS Seattle (@NWSSeattle) June 25, 2020

In a new ruling, the Supreme Court sided 7-2 with the Trump administration over a law the limits the role courts can play in reviewing deportation decisions in certain cases: "The ruling will keep courthouse doors closed to asylum seekers in expedited removal processes who say they cannot return home because they have a credible fear of torture or even death," reports CNN. The five conservative justices joined the opinion penned by Justice Samuel Alito, while Justices Stephen Breyer and the "Notorious" Ruth Bader Ginsburg wrote separate opinions concurring with the judgment.

One million dead people got over $1 billion in stimulus funding from the U.S. Treasury: The families of the deceased are being asked by the IRS to return the $1200 check back to the federal government.

Colorado governor will now review the death of Elijah McClain, an unarmed Black man who died in police custody in August 2019: The horrific case got renewed attention in light of the killing of George Floyd, whose killing under the knee of a white police officer sparked worldwide protests. Two million people signed a petition asking for officials to investigate McClain's death who died after police officers put him in a chokehold and injected him ketamine, even though he was just walking home. Governor Jared Polis says he is having his lawyers "examine what the state can do and we are assessing next steps."

After being removed earlier this month for its portrayal of slavery, Gone With the Wind is back on HBO Max with a new disclaimer that gives the film better context and addresses its more than problematic depiction of the Antebellum South.

You cannot make this up: Can I nominate this anti-mask, deep state, 5G, Hillary Clinton rant from a woman at the Palm Beach County Commissioners Workshop for a Best Original Screenplay Oscar? America the Beautiful! Tag yourself, I'm "We the people are WAKING UP and we KNOW what citizen's arrest is."

This angry Florida woman argued today against the mask mandate, while bringing up the devil, 5G, Bill Gates, Hillary Clinton, "the pedophiles" and the deep state.