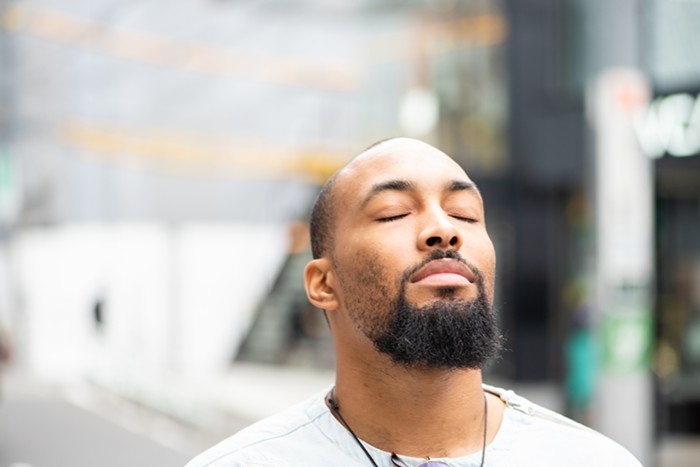 Just feeling that stress-free LGBT CBD gummy... electravk/gettyimages.com
The usefulness of a CBD gummy will make perfect sense to those who are familiar with the distinctly different states induced by THC and CBD. The former can loosen and mellow the root of being, the ultimate target of a psychoactive drug; but a bad trip can easily make one tense and paranoid. The latter, in its pure form, never does anything but calm and soothe the root of one's being.

You also do not lose contact with the world outside. Buildings do not seem sentient, clouds do not take the shape of fantastic animals, the ground remains beneath your feet. CBD provides a kind of reassurance that you will not find in THC. And it is for this reason Out & About, a new Southern California business enterprise, is committed to this particular phytocannabinoid. The feeling that our generally homophobic society is stretching your nerves to a breaking point can be relaxed within minutes by CBD.

As an Out & About press release notes, anxiety has had a considerable impact on the LGBT community. Indeed, the co-founder of the company, Wayne Carkeek, credits CBD with making his coming-out period endurable.

Diagnosed with Generalized Anxiety Disorder, I regularly dealt with a collection of problems after coming out, including frequent panic attacks. It wasn’t until recently, when I finally understood what I was experiencing, that I realized it wasn’t so uncommon. I had trouble being in public, especially in large crowds, and expressing affection with a partner. I had constant worry that someone would take the opportunity to commit a hate crime. Making new friends wasn’t easy either. I held back on coming out to new people, because I wasn’t sure if they would be accepting. In work and personal situations, I lived in a constant state of social anxiety.

Once I began using CBD, I felt at ease and was able to relax in those situations.
My initial reason for taking CBD was gout, which does a number on my toes once every three months or so.

But I also found that it did reduce the force of a panic attack, which I experience three or four times a month. I wake up in the middle of the night. Heart racing. Darkness pulsating. Pop a CBD pill, and in minutes, my heart remembers that its job is to be done unnoticed and silent. I return to sleep.

I tried a number of Out & About's products, which have logo inspired by the Pride flag and which were sent to me by a publicist of the company, and was entirely satisfied.

It's Out & About... Charles Mudede
The large bottle of Out & About's gummies I finished in a week. The small bottle of mints I finished in three days. And I felt the calming effect of each sweet gummy and each breezy mint. The same effect was experienced with Out & About's message oil, which contains oil olive, is almost scentless, and, after shower, makes the body's largest organ, the skin, glow softly for about 30 minutes.

As for the mint-flavored tincture, I have never been a fan of this kind of concoction, and so I can say nothing positive or negative about it. But the company's melatonin/CBD pills worked very well. In fact, I noticed that the CBD in the gel weakened the often troubling vividness of melatonin-charged dreams. For example, CBD can make a flying and ferocious lion fall to the ground and stay there. And you wake up not shaken by the fresh vision of this and other melatonin monsters.

Then there is the CBD Personal Lubricant, which the company also sent me samples of. It is Out & About's most popular product.

"It speaks for itself," explained the company's man-in-Seattle, Ray Vincenzo, over email. "It increases sensitivity, reduces inflammation, and can relax the mind and help you live in that special moment." To be honest, I will not discuss this product because I'm a bit prudish when it comes to matters sex-accessory-related. But it is water-based, has the consistency of sex, contains 100 mg of CBD, and is safe with condoms and toys.

I will, however, conclude with a comment concerning the successful functioning of an erection. If a penis is erect, it usually means its subject is relaxed. Nothing brings you down like fear or anxiety. And the fear that you are not going to have an erection is enough to kill it. So it makes complete sense to use CBD lube if you want to fill that member hard with blood. The more calm you are, the more erect you are.

Have a happy Pride weekend.