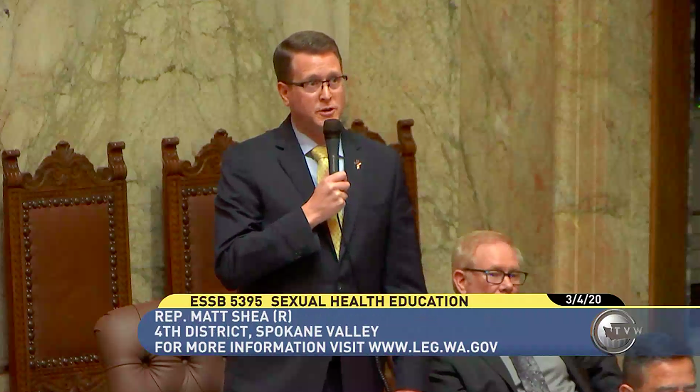 Throwback to last session, when former House Rep. Matt Shea led the opposition to the sex ed bill. Screengrab from TVW, best show on earth
On Thursday Referendum 90 officially qualified for the November ballot after "Parents for Safe Schools," a coalition of churchy homophobes committed to preventing teens from reading queer graphic novels, submitted more than enough signatures to the Secretary of State. No small feat during a pandemic, though leaving blank petition forms at essential businesses and hosting drive-thru petition signing events at middle schools in mid-April seems to have helped.

The somewhat tricky ballot measure seeks voter approval of a law that requires schools to teach comprehensive, age-appropriate, LGBTQ-inclusive sex education statewide. (Parents who don't want professionals to teach their kids any of that stuff can get them excused from class.) The law passed last session, but not without sustained and extremely weird opposition from statehouse Republicans.

Like the gay marriage referendum of yore, the "family values" crew who filed the referendum want people to reject it, which would overturn the common sense sex ed law. So if you do think it's a good idea for kids to learn about sex and consent from someone who doesn't force children to kneel at the feet of priests, then you'll want to approve this one.

Nilofar Ganjaie, board director at the Northwest Abortion Access Fund, said "no-side campaigns on referendums have a 5% boost" from the start, which is presumably why Parents for Safe Schools are taking this route.

Ganjaie added that support for the measure from state House and Senate Republicans aligns with their habit of voting against safety for kids. "The folks voting for this are the same ones voting against banning guns in childcare centers, so at least they're consistent in their lack of concern for children," she said.

Unsurprisingly, the bigoted losers over at the Family Policy Institute of Washington (FPIW) are also backing R-90. FPIW are the same loud assholes who unsuccessfully tried to ban trans people from bathrooms that align with their gender presentation, block domestic partnerships and marriage equality, and defend conversion therapy.

Though the law and the Capitol Hill Organized Protest (CHOP) have nothing to do with one another, that hasn't stopped FPIW director and anti-gay dingus Mark Miloscia from conjuring up a bonkers conspiracy tying all movements for social justice and all Democratic priorities to the machinations of the Dark Lord in a transparent attempt to inflame his already pretty immolated base and drive turnout for R-90. I guess this is the kind of shit the GOP has to pull to GOTV when Tim Eyman is the guy at the top of their ticket.

In an email blast from two weeks ago, Miloscia claimed that the "pagans" of CHOP have captured the Democratic Party, which would be news to Mayor Jenny Durkan.

Nevertheless, the (now increasingly tenuous) existence of CHOP proves the party "and the liberal elites in the news media, academia, and heretical mainline Churches" have now "joined forces with ANTIFA, Black Lives Matter, Marxists, LGBT, and abortion advocacy groups" to do nothing less than "start a race war in order destroy black Americans, Christianity, and our country."

The group spending evenings guarding the East Precinct against dorks who want to bust up the joint comprises the first standing army in "the second Civil War," which "started here in America with the death of George Floyd," said Miloscia.

"Let me be clear, this is Satan’s work, and his false prophets and wolves are very, very busy here in Seattle and America," Miloscia said.

It's probably not worth thinking too deeply about who represents the Confederacy in this second Civil War scenario. (Is it the group holding around-the-clock demonstrations in the service or racial justice, or the group who thinks such demonstrations amount to Satan's work?) But it is worth noting that FPIW appears to have gone full-on Boogaloo.

It's also worth noting that the ballot title and summary changed slightly. The original "Statement of the Subject" read, emphasis mine, "The legislature passed Engrossed Substitute Senate Bill 5395 concerning comprehensive sexual health education, and voters have filed a sufficient referendum petition on this act." And the early version of the summary didn't include a final line specifying that "K-3 instruction must be social-emotional learning."

King County Sexual Assault Resource Center, Equal Rights Washington, Gender Justice League, and other groups successfully petitioned Thurston County Superior Court for a revision. The current Statement of the Subject doesn't include the line bolded above, and now includes the line to clarify the kind of sex education schools will offer to kids.

Twenty-four states plus Washington D.C. mandate statewide comprehensive sex ed, but, until this year, Washington state was not one of them. According to survey data from the Office of Superintendent of Public Instruction, 40% of school districts in Washington didn't teach sex ed at all.

As I reported last year, 36% of Washington's girls say they were sexually assaulted by the time they graduated high school. And state superintendent Chris Reykdal said that we're seeing STIs exploding upward again in our teens.

"We can't ignore the data," Reykdal said at the time. "The message of healthy relationships and healthy sexual activity is not getting heard because we think it's not getting taught."

Come November, Washingtonians will get to decide whether they want that message to be heard clearly or not.