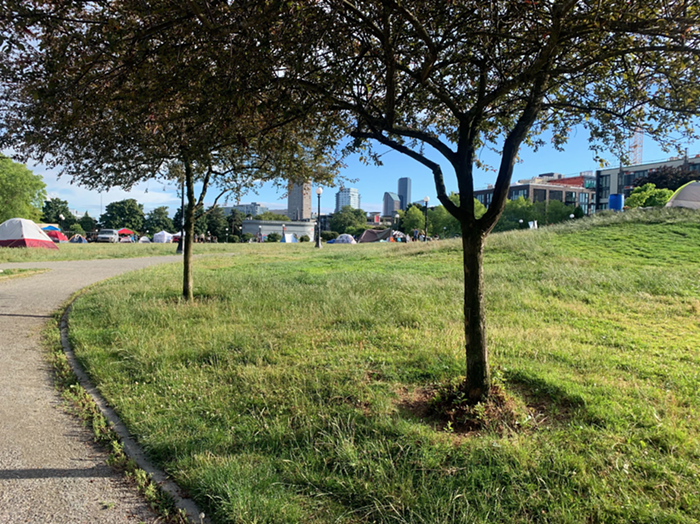 Details are still unclear but they involve a white Jeep Cherokee and a... pickaxe? "911 callers reported a person shooting into a vehicle and at least one person being taken to Harborview by private vehicle. A second person shot was taken to a safe collection area where Seattle Fire then transported the victim to Harborview. Another person reportedly attacked with a pickaxe arrived at Harborview by private vehicle."

The shootings occurred at 12th and Pike, outside East Precinct, along the edge of CHOP: You can almost see the site of the shooting in the image below.

"It was almost literally right outside in front of the East Precinct," another witness confirmed to KIRO.

A King 5 News producer snapped the following picture of the scene: Just after 3 am. Northwest Film Fest is just outside the frame, to the left.

Woke up to what sounded like gunfire and this scene just after 3 am this morning. #CHOP @KING5Seattle pic.twitter.com/YGjY8AOtII
— Joseph Suttner (@josephsuttner) June 29, 2020

There are no suspects: Just as with the previous shootings in or around CHOP, there has been no information released about potential suspects.

Worldwide COVID death toll passes half a million: Some 502,306 people have died from COVID as of this morning.

Paranoid hallucinations are another effect of COVID: "Kim Victory was paralyzed on a bed and being burned alive. Just in time, someone rescued her, but suddenly, she was turned into an ice sculpture on a fancy cruise ship buffet. Next, she was a subject of an experiment in a lab in Japan. Then she was being attacked by cats." Jesus, COVID gets more terrifying by the day.

Another photo taken inside CHOP around 6:30 pm last night. Photo by Christopher Frizzelle
Some good news: Chief Justice John Roberts sides with liberals on the US Supreme Court to keep abortions legal in Louisiana. The decision was announced this morning. Thanks, John. You can read the decision here.

"Something is going on with John Roberts," says Jeffrey Toobin on CNN this morning. Watch it here.

Sasha Baron Cohen pranked a right-wing Olympia rally on Saturday: "Actor and professional prankster Sacha Baron Cohen pulled off his latest stunt Saturday—at a right-wing rally in Olympia—taking the stage and getting some people to sing racist lyrics about Hillary Clinton, Barack Obama and the 'Wuhan flu.'"

Sacha Baron Cohen infiltrated the Washington 3% event in Olympia today. A big donor paid to sponsor the event & hire security & then that security kept the organizers from getting on stage to stop Cohen 🤣

Whatcha gonna do? Chop em up like the Saudis do" (last one had duplicate) pic.twitter.com/dznLj8grZ2
— Justice for Floyd ➡️ I Can't Breathe (@InsideASCIF) June 28, 2020

A skiier disappeared on Mount Rainier on Friday: He was the third person to go missing on Rainier in a week. He is "believed to have fallen in steep terrain during the descent of the upper mountain," Seattle Times reports.