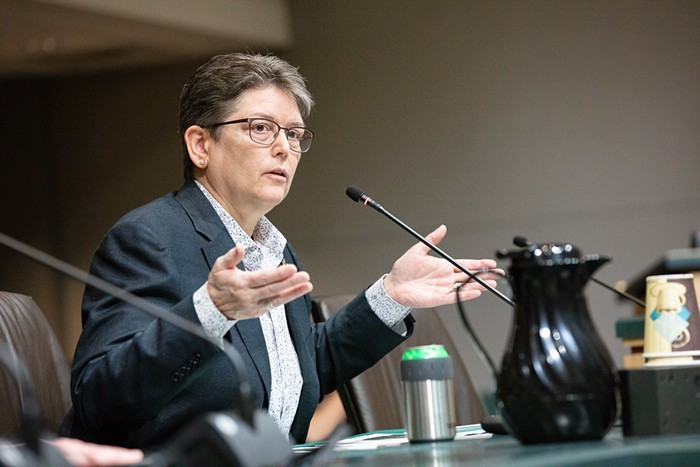 Sheriff Mitzi Johanknecht said she will "take swift action to thoroughly investigate when the conduct of Sheriff’s Office members fails to reflect our core values and violates Sheriff’s Office policy.” Lester Black
This afternoon the King County Sheriff’s Office (KCSO) placed one of its deputies, Mike Brown, on administrative leave after launching an expedited internal investigation over some "concerning posts" that surfaced on social media.

On Sunday, Twitter users shared several callous, disturbing screenshots of posts from a Facebook user named Mike Brown, who apparently thought it was totally fine and perfectly hilarious to respond to reports of a driver speeding into a group of protesters on I-5 by writing, "I see a couple of people got infected with Covid-19 from the hood of a car on I-5 last night."

Summer Taylor, a 24-year-old Black Lives Matter activist who worked at a veterinary clinic, was killed in the incident. Another protester, Diaz Love, was sent to the hospital in serious condition. 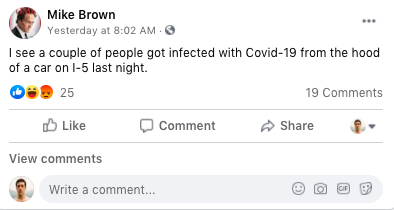 The Brown account also featured a photo of the "All Lives Splatter" car decal, and posted an insulting joke about Lorenzo Anderson a day after the 19-year-old rapper was shot and killed near the CHOP.

I'm deeply disappointed and totally reject the language of my cousin Mike Brown who made inflammatory comments about recent protests. The language is unacceptable and just flat wrong, particularly from a law enforcement officer, as we try to heal the divisions of our community.

In a press release, a KCSO spokesperson said "other Sheriff’s Office employees who may have participated via reactions or comments on the posts will also be investigated."

Kristi Bridgman is a King County sheriff’s deputy, who thought Mike Brown's joke was hilarious. We should be demanding her firing as well. pic.twitter.com/3ahPDjthIe
— Spek (@spekulation) July 6, 2020

In a scathing report released earlier this year from the King County Office of Law Enforcement Oversight (OLEO), analysts found that the Sheriff's office bungled its internal investigation of a officer-involved shooting that left 17-year-old Mi’Chance Dunlap-Gittens dead. We'll see how well they can handle an investigation of social media posts from one of their deputies.