"I personally apologize if I offended anybody, if they felt like I disrespected them as artists," said the rogue sealer. 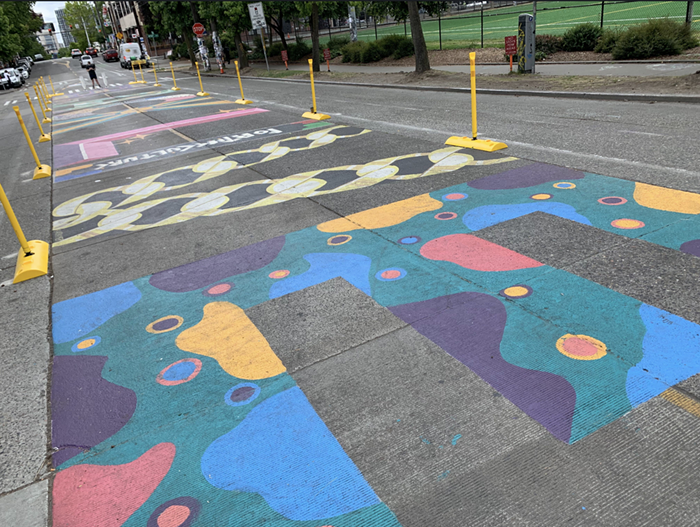 The mural, as of today. JK
On Sunday, the Seattle Police Department was called over concerns that two people were trying to deface the Black Lives Matter mural on Pine between 10th and 11th. Seattle artist and Central Area Chamber of Commerce President Lawrence Pitre, along with an associate named Tanya, was found applying a sealant to the mural. Pitre told me over the phone that it was an attempt to “preserve the work” done by the mural’s artists.

But the group of 16 artists who painted the mural, now known as the Vivid Matter Collective, say that Pitre sealed it without their express permission or consultation, potentially irreparably damaging their work in the process.

“He was never involved,” mural artist and spokesperson for the collective Takiyah Ward said of Pitre. “As far as that mural is concerned, he’s just a community member who got to enjoy and experience it. He never had any sort of dealing with us about this mural, to make that very clear.” 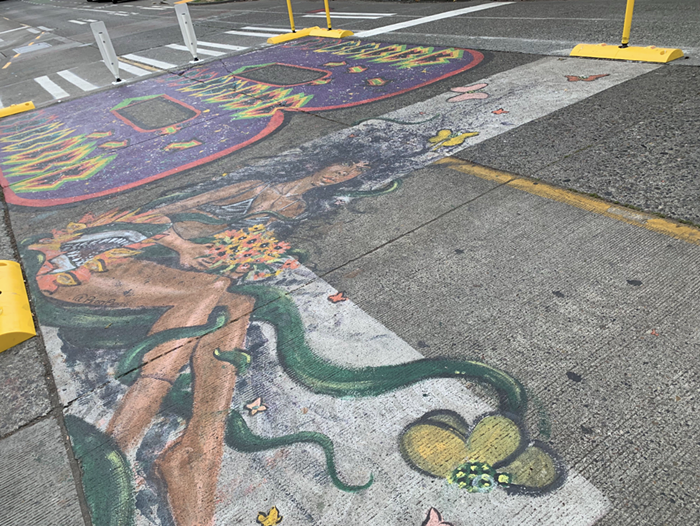 All that dirt and grime is sealed in there for good! JK

The mural—which was completed on June 11—appeared early on in the life of the Capitol Hill Organized Protest (CHOP) and became a celebrated rallying point for the protest zone. It was one of the few art pieces that seemed to avoid further tagging and emerged as an artwork that would remain where it was post-CHOP. 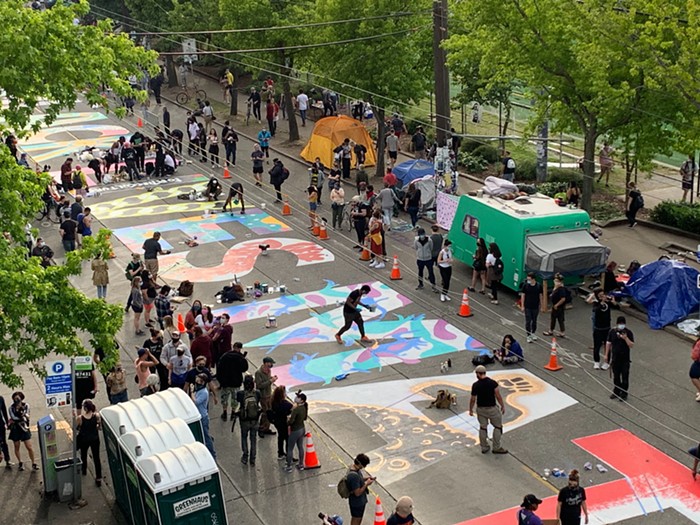 The mural as it was being completed on June 11. JK

It was composed of a base layer of concrete binding agent that ensured the paint would stay on the cement. After initially finishing the mural, organizers intended to come back the next day to properly seal and weatherproof the art, but rainy weather prevented them from doing so. Though the mural would not be protected from foot traffic, the barricades at 10th and Pine prevented heavier vehicles from messing up the artists’ work for the time being.

In the weeks since, Ward told me the artists have been in communication with the Seattle Department of Transportation (SDOT) about how best to protect the mural and ensure its longevity. But the group claims Pitre’s actions completely undid the progress they had made in those conversations, potentially forcing the team to redo the entire piece.

When SPD arrived on the scene to talk with Pitre on Sunday, SDOT seemingly gave him the go-ahead to continue sealing the mural with tons of dirt and imperfections, not realizing that he had nothing to do with the mural’s group of artists.

In an email apparently sent to Ward and posted by mural artist Aramis O. Hamer on Instagram on Sunday, SDOT Director Sam Zimbabwe apologized for not checking in with the collective, saying “the whole thing caught us off guard on a Sunday morning since we heard about it once it was already underway.”

A statement put out by the department commits to the "long-term preservation of this mural," pointing to their installation of speed bumps around the work and a new 4-way stop sign at 10th and Pine to help drivers transition on to the block at a slower speed.

Ward herself ran up to the scene as soon as she heard what was happening and encountered a defensive Pitre, who she said feigned ignorance about who exactly was involved in the process despite her claim they had spoken previously about her participation in the mural.

After a heated back and forth between Pitre’s team and the collective, they allowed him to continue sealing the mural as “there’s nothing we can do right now.”

“Without a doubt, [the sealing] was an act of vandalism against the work that we put up,” said Barry Johnson, who painted the “E” in “LIVES.” He pointed out that the team of artists was “within days” of returning to repaint scuffed segments of the mural before the incident on Sunday. “Why would it make sense for you to go and clear coat something that is just full of dirt, full of grime? It has tire marks all over it!”

Pitre, for his part, gave a fuzzy explanation as to why he took it upon himself to disrupt the mural. He told me that he became concerned about seeing graffiti around and in between the mural's lettering. In an effort to "protect the interests of the artwork itself" he decided to seal it as it was, so the group of artists actually involved could have enough time to coordinate with the city about its preservation.

Though Pitre said he does not regret taking it upon himself to clear coat the mural, he realized he should have communicated better about his actions. "I personally apologize if I offended anybody, if they felt like I disrespected them as artists," he told me. "That wasn't my intent. My intent, again, was to preserve the artwork for the movement."

Ward and Johnson said the collective of artists are meeting today about the path forward with the mural. Johnson said the product Pitre and his associate used to seal the mural—Thompson's Water Seal—changed both the medium and the bond of the piece, turning what would have been a few hours of touch-ups into a much larger endeavor that could permanently change the piece for good.