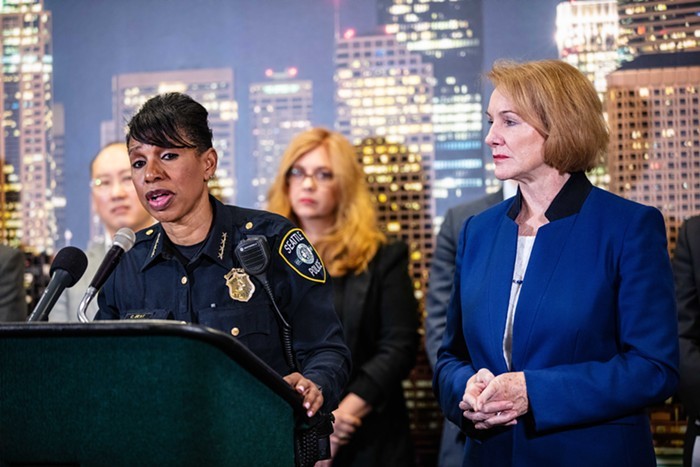 SPD Chief Carmen Best quickly deleted a tweet she made Tuesday night. Too bad it's public record. Lester Black
Harvard and MIT sue Trump: Over the policy he announced yesterday that would strip international students of their visas if their classes are entirely online next term. Universities are pissed, believing this move to be politically motivated and a twisted way to pressure schools to open despite COVID-19 cases spiking. A lawsuit filed by Harvard and the Massachusetts Institute of Technology says that the new order violates the Administrative Procedures Act and that "the effect — and perhaps even the goal — is to create as much chaos for universities and international students as possible,” the New York Times reports.

Meanwhile: Students are allegedly giving up their in-person spots to international students to stop them from getting deported.

DM me if you're an intl student needing an in-person class, or a resident w one you'd swap

GOP rep tells people to "STOP GETTING TESTED": Nino Vitale, an Ohio representative and a cuck for personal liberties, is asking people whether they're "tired of living in a dictatorship yet?” COVID-19 cases are climbing in your state, Nino.

Remember when Trump grandstanded to get churches back open? Well, churches are major COVID-19 hotspots now. "More than 650 coronavirus cases have been linked to nearly 40 churches and religious events," over the course of the pandemic writes the New York Times. Most, though, are from just the past month.

SPD Chief Carmen Best can't kick the Twitter habit: She should probably consider doing so. Last night, Best, who is in the middle of all types of shit right now regarding her police force and her leadership, chose to tweet a conciliatory message about the passing of Mary Kay Letourneau, a teacher who raped a 13-year-old child in the 1990s and married him after her time in prison. Best tweeted "Sad about this. RIP" in a reply to the New York Times article about it. She quickly deleted the tweet but of course, there are screenshots. Also, her tweets, deleted or not deleted, are public record.

After deleting a tweet from her official account, @carmenbest tries to backpedal. The deleted tweet (captured here) is public record. The message sent from Seattle's top cop - publicly expressing remorse over the death of a *child rapist* - is chilling. https://t.co/u1l0A2bf1Q pic.twitter.com/UjzrS19cbt
— Michael Maddux (↙️↙️↙️) (@michaeljmaddux) July 8, 2020


Can someone explain what happened here? Obviously I'm still trying to wrap my head around this—not the sentiment, I can't even begin parsing through that—but what was she thinking tweeting this on her official account? Does Best have a burner Twitter account she thought she was logged into while posting these condolences? Or maybe the synapses between her tweeting fingers and the this-might-be-a-bad-idea part of her brain didn't fire? Either way, I did not have "Police chief mourns child rapist in the midst of a police brutality uprising" on my 2020 predictions list.

On that note: Mary Kay Letourneau, 58, is dead from cancer. Letourneau was a teacher in the 90s and went to jail for seven years after raping one of her students. She and her victim maintained that the relationship was consensual. It began when the boy was 12 or 13 and the pair had had two children together before the boy turned 15. Letourneau died near Seattle.

Mayor Jenny Durkan's meager SPD cuts: Are mostly a result of the pandemic, not the demands of the protesters. Of the $20 million in proposed cuts to SPD's budget, only a $4 million reduction in capital expenses connected to the construction of a new North precinct (which has already been delayed a number of times) could be tied to protester demands.

With an average high temperature of 69.4° this was the coldest first week of July in Seattle since 2002 ( 68.6° ). Another upper level trough will bring more showers to the area tomorrow with yet another in the endless series of troughs arriving over the weekend. #wawx pic.twitter.com/rMRI0Mv0xj
— NWS Seattle (@NWSSeattle) July 8, 2020


What happened at the last CHOP shooting? The June 29 shooting marked the end of Seattle's tolerance for the Capitol Hill Organized Protest. The SPD has not given any information on the case. The Seattle Times elaborated on the events from the early morning chaos that led to 16-year-old Antonio Mays Jr.'s death. He and a 14-year-old boy were in an allegedly stolen Jeep that sped through CHOP. They were shot at. Still, it's unclear exactly what happened. What we do know: Mays Jr. wasn't from Seattle, he had come up from San Diego to be apart of CHOP, according to his family; We don't know his relationship to the other boy with him; it took SPD five hours to arrive at the scene of the crime despite 911 calls.

Pedestrian struck by semi truck: The four right lanes of southbound I-5 near Kent were closed before 5 a.m. this morning after a truck struck and killed a pedestrian. State troopers currently don't have any estimates on when the freeway will be reopened.

A driver who plowed his SUV through a crowd of protesters last night has been released by police and will not face charges. Exclusive video shows the moment the driver rammed into several bicycles near Times Square. One person was dragged for a block. pic.twitter.com/GPiXFxNM30
— Spectrum News NY1 (@NY1) July 8, 2020

A double whammy: Donnie and Ronnie Galyon were the oldest pair of conjoined twins. They died last weekend at the age of 68.

Whoever said Airbud Spikes Back is a work of fiction is a liar:

China has also made it illegal: To criticize the rule worldwide.

Speeding Australian man was actually just wrestling a snake: He was speeding but for a good reason, Queensland police officers discovered. He was attacked by a snake in his car and had to fight it off with a knife. He was in the process of racing to the hospital because he feared he'd been bitten.

It just keeps getting uglier out there, folks: "Sen.Tammy fires back at Tucker Carlson for suggesting she hates America after losing her legs serving same America in Iraq."

Bad news for Seattle transit workers: King County Metro Transit employees, who have spent their pandemics on the front lines, will likely lose out on three years worth of cost of living raises in order to cut costs and save their jobs. They had just negotiated the raises before the pandemic hit.

Reminder! There's a free crossword for you right here.