An Interview with Mayor Teargas 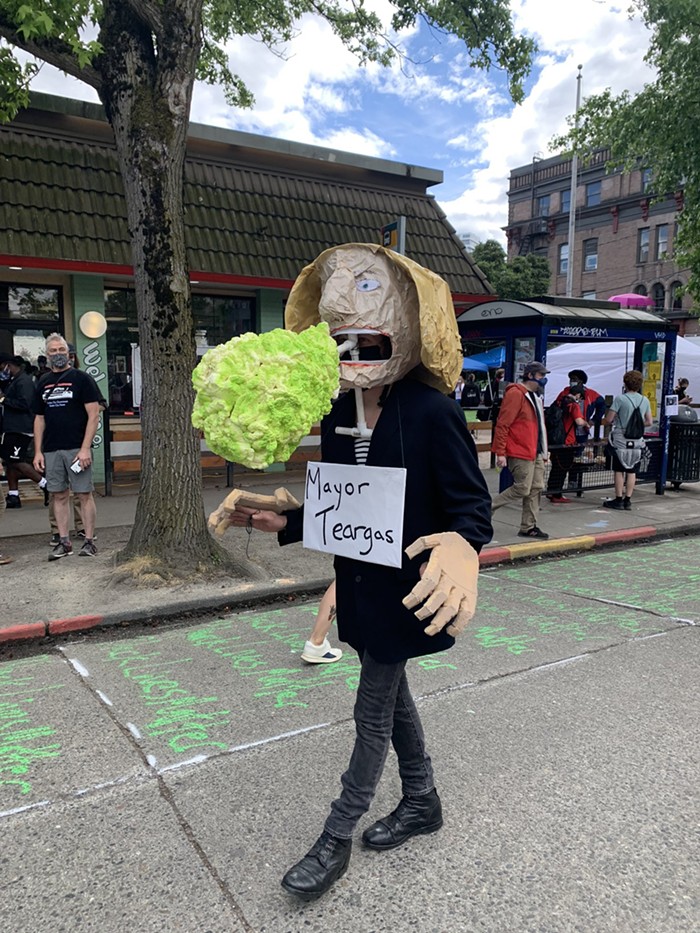 Since Mayor Durkan never gives us a straight answer, we decided to chat with her better half. Jasmyne Keimig
So…uh…who are you?
You can call me Willem.

What inspired to create this Mayor Teargas character? Did you get teargassed?
I was lucky enough to already have a good gas mask (see above), so I was spared the worst effects of Durkan and Best's gassing of protesters. What I saw all around me was horrendous, War of the Worlds-level chemical violence. My gas mask allowed me to assist screaming, sobbing, temporarily-blinded people out of the poison clouds, to the medics who could treat them.

What is the costume made out of? And how long did it take you to make it?
I had a few days during which I was waiting for a COVID test to come back negative, so I pieced together this monstrosity during that time. The head is made of papier mâché-d chicken wire “welded” onto a bike helmet with spray foam. The giant, creepy hands are made of scraps of upholstery foam.

Specifically, what is the “tear gas” made out of?
That's a big wad of bubble wrap covered in spray foam. It is counterbalanced by running a bungee cord from the back of the head down to a belt loop, giving me a permanent wedgie.

When did you debut this costume? Is it hella hot inside?
I took her out the first weekend of CHOP, which was mercifully cool. The humidity gives Mayor Teargas really flat hair volume, so I'm not sure how to deal with that now.

Do you speak? Or is Mayor Teargas more about shock value?
Mayor Teargas has granted one interview so far, with Joey Wieser. The only words spoken were, “Five percent!”

Are you a cosplayer? Do you make these kinds of costumes regularly?
I have made three big dinosaur costumes in the past, each one better than the last. The human form is still well beyond my skill level, as we can all clearly see.

What do you do when you’re not Mayor Teargas?
I protect marches by participating in bike and car brigades, and I make sure protesters stay hydrated.

How aware are you of Mikhail Bakhtin and his idea of the social function of the carnival? Ok, ok, have you at least read this Mudede article about the Bakhtinian carnival? What were you hoping to accomplish by showing up dressed as Mayor Teargas to CHOP/CHAZ?
Ugh, I didn't realize there would be required reading. Hold on a sec . . . skimming through . . . um, nope, I am doing nothing nearly sophisticated enough for Mudede to write about. My goal is simply to deny Durkan the opportunity to get away with her crimes against protesters as she now tries to pretend that she's some sort of civil rights leader.

My mission is simply to do my part to hold her accountable for just this one crime of using illegal chemical weapons of war on protesters during a pandemic.

Who did you vote for in the 2017 mayoral election?
I voted for the person who wasn't Durkan. What was her name again? Whatever, who cares! Nikkita Oliver is my mayor.

I saw that the real Mayor Jenny Durkan at the very least acknowledged your presence a few weeks ago at a Juneteenth rally. Has she or her team been in any more communication with you?
I am ashamed to admit that I am not a wealthy political donor, so I have not heard from the mayor's office.

On your Twitter bio, you say that you’re available for birthday parties—have you had the chance to terrorize anyone for their birthday yet?
It makes me so proud to see children cowering in fear when I walk by. It's even better than the children who beg their parents for a picture with this ghoulish monstrosity that I have brought to life.

Would you say you’re “booked and busy” during all these protests?
My entire life is on hold as the uprising continues, but Mayor Teargas's appearances are rare. It is too easy right now for white people like myself to fixate on the police violence that we have experienced during the protest, allowing our own experiences to eclipse the moral imperative behind Black Lives Matter.

Yes, the violence we all faced was an atrocity, but the larger context is that Durkan, Dow, Inslee, and Trump would all rather rain down chemical weapons and explosives on protesters than stop killing Black people. For that reason, I generally try to limit Mayor Teargas's appearances to demonstrations specifically targeting Durkan and to photobombing the soon-to-be ex-mayor whenever possible.

Recently, a petition to recall Mayor Durkan was certified for signature collection by a King County judge. What’s your plan for Mayor Teargas? Will you continue to try and show up to the mayor’s public facing events? When does Mayor Teargas “go away”?
The day will come when we have dismantled the carceral state and replaced it with a casserole state. On that day, Jenny Durkan will be the last person released from prison and Mayor Teargas will be there waiting for her.

Would you like to see Durkan deposed?
Deposed? As in testifying under oath when she is tried for her crimes? Yes, I would like that very much.