What to Do If You're Kidnapped by the Army While Protesting 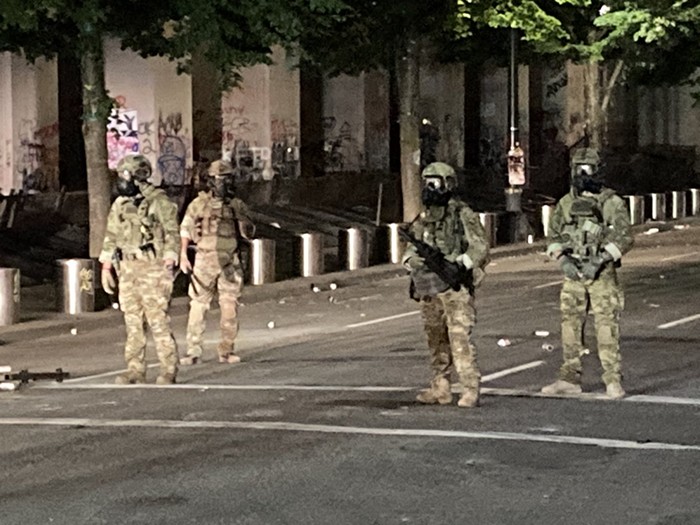 Camouflaged goons seen on the streets of Portland last night. What’s happening down there could be extended to other cities soon, according to Homeland Security. Photo by Steve Humphrey
Well, I guess this is the world we’re living in now: Security forces loyal to the national regime have invaded a northwestern province to attack and kidnap political dissidents. By now we’ve all seen the video of Army goons grabbing Portland protestors off the street and throwing them into unmarked vans; shooting at a group of moms; and beating a veteran and breaking his hand for standing in the street.

(Coverage of what happened down there last night is here.)

According to Donald’s acting deputy secretary of Homeland Security, Ken Cuccinelli, what’s happening in Portland could be extended to other cities soon. Meanwhile, Seattle police seem to be begging for an escalation, claiming that protesters attacked them with bats this weekend. (Remember, this is the same organization that claimed antifa was extorting Capitol Hill businesses, so, uh huh.)

So let’s say a bunch of camo-clad goons show up in Seattle next. How should protestors respond, and how can you mitigate the risk of attack and abduction? Well, fortunately, there are some handy guides to keeping yourself safe in such situations, courtesy of our friends, the federal government.

(Note that none of this is legal advice, but actual legal advice is available from the National Lawyers Guild here.)

The U.S. Department of State’s Overseas Security Advisory Council has a handy guide to preventing abduction by militant forces, and their advice seems pretty sound: Always tell a trusted contact where you’re going, where you’re planning to be, and when you plan to return. Keep a low profile. Avoid traveling repeatedly on the same route.

“Kidnappers generally keep victims under surveillance for substantial periods of time,” writes the Department of State’s guide. “Unpredictability is one of your best weapons.”

If you are grabbed, “while first being taken captive, if feasible, scream and move about to draw attention to yourself,” OSAC advises. In addition, “leave evidence of your presence in each location. Examples include strands of hair, fingerprints, blood, bits of fingernails, etc.” This can be useful to people when trying to track where you've been taken; or it could just fuck up the Army's deposit on their Enterprise rental car.

You should also “make a mental note of all movements, including time in transit, direction, distances, speeds, landmarks along the way, special odors, and distinctive sounds like bells, construction, voices, etc.”

Once in custody, you may be presented with an opportunity to gather valuable intelligence on your captors. The FBI has a guide to what they call “elicitation” — that is, collecting information that is not readily available through “the strategic use of conversation.”

(Update: An important caveat here is that many legal experts advise that you do not talk to your captors at all.)

According to the FBI’s Elicitation Techniques brochure (they have a brochure!!!), elicitation can exploit natural human instincts, like the desire to correct others, to convert others to an opinion, or a desire to feel as though one’s work is valuable.

The FBI suggests several techniques for extracting information, like pretending to have more knowledge than you do, pretending to divulge confidential information, feigned ignorance, mutual interests, and so on. If you have an opportunity to converse with your captors, you may be able to learn more about who they are and what they’re planning.

But above all, of course, you should stay safe. In general, it’s not advisable to put up a physical fight against a well-armed security force because you’re likely to be overwhelmed. Even arguing can backfire, says the State Department: “Avoid making provocative remarks to your abductors. As noted, they may be unstable individuals who react irrationally.”