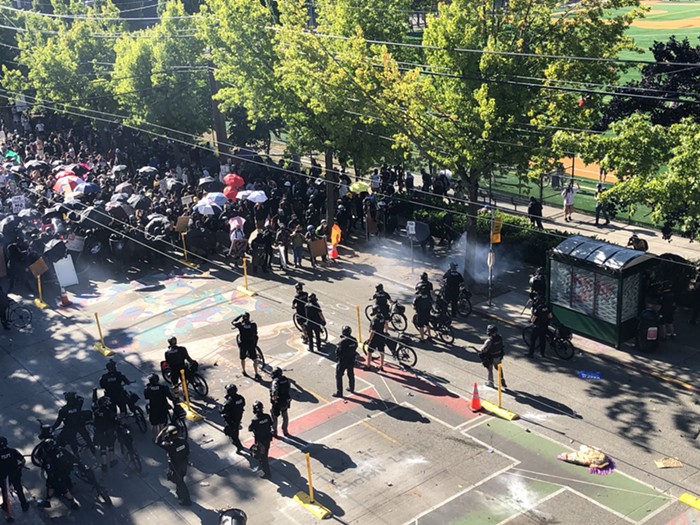 Feels like old times on the Hill. RS
On Saturday many in Seattle anticipated a Portland-like clash between protesters and Trump's newly arrived security forces, who were sent to town "on standby" allegedly to reinforce Federal Protective Services at a couple federal courthouses downtown.

But for now, at least, the grievances of Seattle protesters still lie mostly with Seattle's police, which makes sense. Protest leaders said direct actions carried out in the last week were designed to "reignite" the dwindling protest crowds here, and flyers for Saturday's event mentioned solidarity with Portland, but some also listed familiar, local demands: Defund the police and reinvest the money in Black communities, free all protesters, No New Youth Jail, and recall Mayor Jenny Durkan.

And so the demonstrations yesterday ended up looking more like a small-scale version of the June protests, with the Seattle Police Department responding to property damage and fireworks by throwing blast balls at protesters, indiscriminately pepper-spraying crowds, and unloading rounds of rubber bullets.

Hello from Broadway and Pine, where hundreds have gathered in solidarity with the protesters in Portland. Diverse crowd. We’ve got demands to defund SPD and reinvest in Black communities, free all protesters, and No New Youth Jail. pic.twitter.com/kHp9HJLQtN
— Rich Smith (@richsssmith) July 25, 2020

By about 2:00 p.m., hundreds had gathered on the south lawn at Seattle Central College. After several people spoke, including Christina, a representative for Wall of Moms - Seattle, a group inspired by Portland's protest moms, the crowd headed up Broadway.

A Seattle nurse named Simon told me, "I know that police violence is a public health crisis—that's why I'm here." Karen Taylor, a member of the Transit Riders Union, held a sign that read, "We stand with Rose City." Referring to the arrival of the Feds, she said, "I've been afraid of a police state for a long time, and now it's happening."

Along the route, some protesters blocked cameras with umbrellas. A person who blocked my camera said her goal was to prevent faces being filmed, as she believed police have been arresting protesters a month or two after journalists publish or tweet photos of demonstrations.

Around 4:00 p.m., the crowd stopped for a snack break outside the youth jail on 12th Ave in the Central District. At that point, some protesters hopped the nearby construction site's fence and burned four trailers. They also busted the jail's windows, and slashed tires and tagged cars in the parking lot. Emergency vehicles arrived to extinguish the flames.

The crowd continued north to Capitol Hill, busting windows at Canon and Rhein Haus. Windows at the Starbucks on Columbia and 12th were broken, and the fire alarm was triggered. Residents of the Rianna Apartment complex, which is attached to the Starbucks, were evacuated.

When protesters approached the East Precinct on Capitol Hill, police say someone "breached the precinct's fence line" and then "a device exploded leaving an 8-inch hole in the side of the precinct."

Police then declared a riot and started deploying blast balls and pepper spray. In a new development, protesters reported police using colored pepper spray, which marked people with blue or yellow dye in addition to burning their eyes and skin.

The next several hours saw intense clashes and uneasy standoffs between protesters and police at 11th and Pine, with one side throwing fireworks and the other side throwing explosive chemical agents, shooting rubber bullets, and pepper-spraying groups of protesters. Police say they made 45 arrests "for assaults on officers, failure to disperse, and obstruction."

Some video of the arrest from earlier. pic.twitter.com/vLVZuUEROV
— Rich Smith (@richsssmith) July 26, 2020

Large blast ball vs fire work fight just a few moments ago on Pine. Cops have since pushed crowd back to Broadway, and the crowd on 11th has dispersed. pic.twitter.com/L8VLDA6qUa
— Rich Smith (@richsssmith) July 26, 2020

This nurse in scrubs gets blasted by spray while trying to grab someone away from police. Her “day job” is RN at Seattle Cancer Care Alliance. She told me helping people is her calling and that’s why she’s here. And yes, her skin burns all over. #Q13FOX #SeattleProtests pic.twitter.com/fWxrCfl9Ph
— Simone Del Rosario (@SimoneReports) July 26, 2020

Several calls for medics so far today, I spoke to one protester who says he was hit multiple times after police fired a paintball style gun. According to him, he pointed to police to turn on their body cameras and did nothing to provoke such a response #seattleprotest pic.twitter.com/dYprI4Icis
— Elizabeth Turnbull (@LizTurnbull5) July 26, 2020

After nightfall, a "Riot Ribs" van showed up with a couple charcoal grills and offered free hot dogs, snacks, and water to the small group of protesters still facing off against police at 11th and Pine. The Times reported that the cops ultimately retreated back into the East Precinct around 1:30 a.m.

On Sunday at 11:00 a.m., demonstrators plan a protest against Immigrations and Customs Enforcement. See ya then.