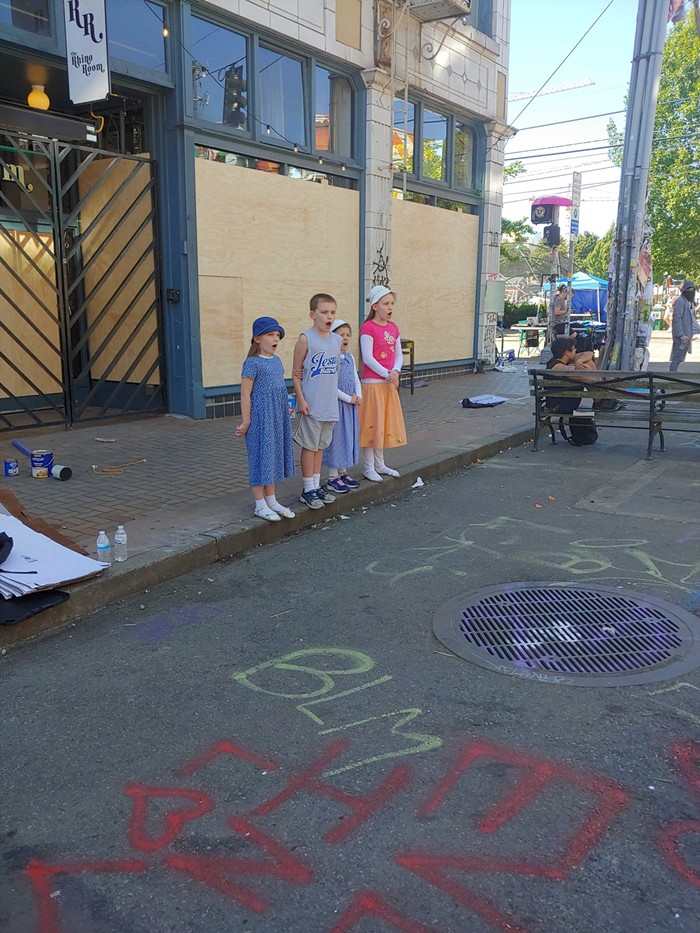 Upstanding children singing those old time Christian songs back in the heyday of CHOP/CHAZ. Charles Mudede
Jacob Vigdor, a Manhattan Institute adjunct fellow, wrote an article in the New York Post, which is owned by Rupert Murdoch (aka Elliot Carver), that is exceptionally muddled. It's called "Seattle’s progressive prescription for rapid urban decay." Its aim, one gathers, is to provide a professional estimate of "what went wrong" with the Emerald City. You see, what ever this Vigdor character has to say must be appreciated because he received a Ph.D. in economics from Harvard University, just like another character, Jason Furman, who four months ago predicted that the US would be in the middle of a V-shaped recovery. (Furman made that prediction by excluding the most important factor: the pandemic was not over—you can read my analysis of Furman's cracked economic thinking here.)
Sponsored

Back to this Vigdor chap. He believes that progressives have brought Seattle to the brink of disaster. Our atrociously high minimum wage, our oversized investments in public transportation, our general utopian dreaminess has left us with bridges that are falling, unemployed people who can't get jobs because they are too expensive to hire, and the horrors of horrors: the autonomous zone. But the most pronounced flaw in this economist's analysis turns out to be the same as Furman's: there is no break between the world before or after the pandemic. Yes, unemployment is 15 percent in Seattle, yes, that is really up there; but it was nearly 3 percent in January. And what does any of this have to do with Ed Murray, Seattle's disgraced former mayor?

In 2017, then-Seattle Mayor Ed Murray vowed that his city would “shine a light and offer a different vision.” He envisioned a Seattle where all 4-year-olds attended preschool, where all high-school graduates had access to free community college and where strict labor standards guaranteed the lowliest worker a reasonable standard of living.

Yes, Ed Murray promised a new and bright Seattle. That did not happen. A hairy dog sits in the passenger seat of a red Mazda parked at the Columbia City Walgreens. He has many dreams that did not happen. A woman in a hat with a floral pattern looks out at Lake Washington on a sunny summer day. She hopes to see someone walking on water. This does not happen. What I'm trying to express is the feeling I had after reading Vigdor on Seattle. How does this thing (Ed Murray) connect with that (pandemic economics)? No idea. He mentions a whole bunch of developments in the previous decade and somehow attempts to connect them to a city that has been on lockdown for 3 months and is still social distancing and will continue doing so for many months without coming anywhere close to a full economic recovery. What do the West Seattle Bridge woes have to do with the present pandemic?

You get my point. Vigdor is nothing more than a fog machine for some show. And so it is best not to examine the generator of the artificial fog, and instead attempt to make out the show or scene whose mood or feeling Vigdor wants to enhance.

Here is what I can tell. The murder of George Floyd found Trump, the leader of the right, returning to a part of his inaugural speech that was not much use to him while the economy was expanding and unemployment was low. But when millions lost their jobs in March due to the pandemic, Trump was left with nothing. All he had was the economy. In this respect, his understanding of the situation was not that different from the one Bill Clinton had during the Monica Lewinsky scandal. Clinton survived that episode and its impeachment because the economy was booming. If it was in shambles, the blowjob in the Oval Office would have ruined him. Trump needed to be in Clinton's shoes. 42 had one front to deal with, 45 has more than you can count.

Let's revisit March 2020. Trump's reelection chances depend on repairing the crashed economy, and the process of repair depends on re-opening the economy. But re-opening America can mean only one of two things: the pandemic is over or making people live with the pandemic. Trump is in a terrible hurry, so he settles for the former. But it doesn't work. Re-opening America while infection rates and death rates are very high (what I call necro-economics) proves, by June, to be deeply unpopular with voters. The V-shaped recovery ain't happening like it's supposed to. What to do? Look over here, there's George Floyd and the protests his murder ignited.

At that point, Trump exhumed and dusted off this passage from his inaugural speech: "This American carnage stops right here and stops right now." This was about cities, their liberal mayors, their tolerance. These cities are decaying, are in chaos, are without law and order. This is the show Vigdor is trying to enhance with his New York Post piece. But who is Trump and Vigdor trying to scare? Who is their audience? Oddly enough, it's suburban voters.

In remarks on the South Lawn, Trump claimed Washington Democrats want to assume control of local zoning decisions and attacked a rule meant to combat segregation, a move he said would "obliterate" suburbs.
But where has Trump been all of these years? Did he not watch Next Friday in 2000? By then it was clear to even black Hollywood that the suburbs where becoming browner and blacker. It was instead the "inna city" that was becoming white. The same transformation occurred in Seattle. Blacks now live in Renton and Kent (the outskirts), not the Central District (Seattle's first major black neighborhood). There is not anything new about the racial diversification of the suburbs. But the push to color 21st century Seattle in the same way the right colored Detroit in the 1960s only shows its bag of tricks is outdated or nearly empty.