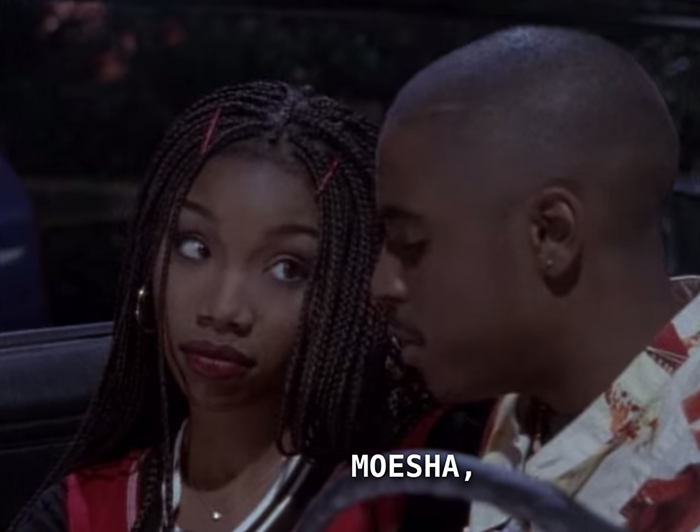 I love the hairpin/box braid combo here. Screenshot from Netflix
To the delight of many, last month Netflix announced the arrival of seven popular Black sitcoms that have long been unavailable on streaming services. Moesha, The Game, Sister Sister, Girlfriends, The Parkers, Half & Half, and One on One will all be arriving over the next several months to the platform. What took them so long?!
Sponsored

The very first show to arrive on Netflix is Moesha, a series which followed the life of Moesha Mitchell (played by theeee R&B singer and legend Brandy Norwood), a teen living in Leimert Park, Los Angeles with her family. Airing from 1996 to 2001, Moesha was immensely popular during its six-season run and syndication for its quirky, Black teen girl lead and the distinctly Black fashion and hairstyles featured on the show.

“The show’s vision was of a cool young Black girl who was brave and creative in her life, and that [carried] over in her style," Sara Finney-Johnson, co-creator of Moesha, told GARAGE in an interview last year.

Particularly, Moesha's box braids that Brandy rocked both on and off the show have become iconic. So much so, that fans melted down last year when a rumor got out that Brandy's fastidiously done microbraids were ACTUALLY part of a lacefront wig (spoiler: the actress-singer's hairstylist Deedra Cole resolutely debunked that myth, saying her braids really did take hours).

The space buns-braids along with denim were A Moment for me. Also, peep the incoming random white woman! Screenshot from Netflix
While I didn't grow up consistently watching the show, I do remember curling up with the Black beauty magazines I stole from my mom's dresser, admiring both the range of styles Brandy shaped her braids into as well as the fortitude of her edges. And as I work my way back through the early seasons on Netflix, Moesha's hairstyles play a central role in how she carries herself as a character and how she's perceived by others as well.

Like in the fifth episode of the first season, "Reunion", when a freshly 16-year-old Moesha goes on a date with Matt ('90s white boy of the month-cum-cult leader Andrew Keegan), a boy she knew in preschool and reconnected with only recently after he moved away years ago. After some tense experiences in both the white and Black hangout spots, they end up breaking it off. It's typical millennium-era interracial dating fair for the kids, but Moesha's half-space buns, half-down look coupled with a tight denim vest and jeans is a playful and glamorous look that I think establishes her as a creative and grounded girl.

So it was interesting when Matt's friend interrupted their date, here:

Chaser. Screenshot from Netflix
This micro-aggression singles out Moesha's hair as a way to reiterate how much she doesn't belong in the majority white space. Matt's friend doesn't even give Moesha the time to correct her about her braids, plowing on as if she said nothing. Moesha handles the situation calmly and, though small, this interaction helps establish Moesha's style and adornment as central to who she is as a character in episodes and seasons to come. And I'm still thinking about that space-bun look.

All six seasons of Moesha are currently available to stream on Netflix.