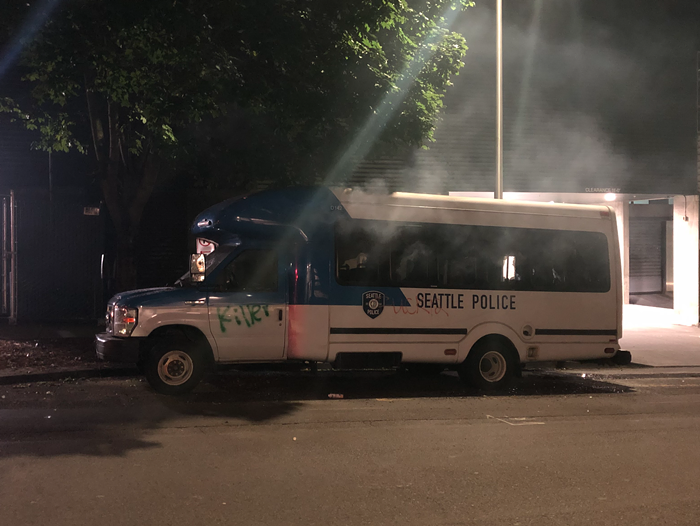 Protests in solidarity with Kenosha—where a white officer reportedly shot a black man in front of his kids—broke out in cities across the country last night, including Seattle. RS
Two big storms poised to pound the Gulf Coast: Meteorologists expect tropical storms Marco and Laura to hit Louisiana and Texas this week, and COVID will complicate the response. According to the Washington Post, "Louisiana could face an unprecedented one-two punch, with both storms potentially hitting the state as hurricanes in a three-day span." So uh, let's keep an eye on that.

There is no "deep state" within the FDA trying to delay the COVID-19 vaccine: Or so the head of the agency tells Reuters, which is [takes huge bong hit] exactly the kinda shit you'd expect some deep state opp to say. [exhales] I had to type that last sentence because the President casually and without evidence spread that conspiracy theory on Saturday, and it took two days before anyone could file a report disputing the claim.

Antifa King Joe Biden will swap cops with the PC police and cancel white suburbs into a "Socialist utopia:" That's my best shot at summarizing Day 1 of the Republican National Convention, an unhinged spectacle of Trump worship featuring a parade of absolute psychopaths on a mission to scare the holy shit out of any swing-voting single-family homeowner who's thinking about pulling the lever for Biden in November. At one point, South Carolina Senator Tim Scott threatened everyone with a good time when he claimed Democrats "will turn our country into a Socialist utopia" if we elect.....Joe Biden. "President Trump was trying to rewrite history and enlist frontline Covid workers to the cause. The strain showed," reports the New York Times.

We added the music so you don’t have to pic.twitter.com/rVJ45bfqcM
— Mother Jones (@MotherJones) August 25, 2020

And I trust Slog readers to tell me what the fuck Don Jr. snuck into his snack pack last night: A couple lines of premium white rhino? A speedball? Molly and two cans of Monster? Maybe just an onion? Maybe Baby Don is just so beyond fucked at this point he can get juiced on an allium?

In all seriousness: Speakers made the positive case for the President by presenting the following false narrative: the economy was going gangbusters until a virus emerged from the Communist Chinese party and did something bad (we won't say what), but then our kind and caring leader saved the day by blocking travel from China a month after we heard about the virus, and he could have saved even more of the day if Democrats hadn't called him racist for only issuing a travel restriction against China initially!!!! Now Trump will rebuild our economy, which crumbled because Democratic states and cities allowed Black Lives Matter to protest for a short time without sending in the National Guard and secret police to crack down on them!!!!! And also some immigrants are batshit Republican business owners, so stick it, DemocRATS!!!!!!!!!!!!!!!!!!!!

And here's how the Democratic outreach to Republicans is going:

Only 5% of Republicans say they’re voting for Joe Biden.

Anyway, Melania speaks tonight: Some seasoned professional at the Washington Post literally wrote the phrase, "The Trump campaign hopes she can be its secret weapon."

Africa is polio-free: So says the Africa Regional Certification Commission, according to the BBC. "Twenty-five years ago thousands of children in Africa were paralysed by the virus. The disease is now only found in Afghanistan and Pakistan."

Protests in solidarity with Jacob Blake broke out across the country: On Sunday a white police officer in Kenosha, Wisconsin reportedly shot Jacob Blake, who is black, seven times in the back in front of three of his children. The shooting left Blake paralyzed, the Wisconsin State Journal reported Tuesday morning. But shortly after video of the shooting made the rounds on social media, the city erupted in protest, and those protests continued into Monday night. The WSJ reported police "again firing tear gas at hundreds of protesters who defied a curfew, threw bottles and shot fireworks at law enforcement guarding the courthouse."

In Madison, WI: The Isthmus reported cops deploying tear gas in response to protesters gathering, smashing windows, and lighting fires in the streets.

In Portland: The protests continued.

Still standing off at the PPB. One of the officers took a couple shots at the crowd known only to him

The graffiti on the PPA is very good tonight

In Seattle: At about 8:30 p.m. around 200 to 300 direct-action demonstrators gathered outside the East Precinct to protest Blake's shooting and the Seattle Police Department in general. The crowd marched from Capitol Hill to the West Precinct and then back to the East Precinct, smashing windows along the way at the same corporate storefronts they've been hitting occasionally for the last month.

After a few hours of walking around town protesting, protesters ended up throwing fireworks and lighting a small fire outside the station. Police responded thusly. Saw at least one arrest. pic.twitter.com/g5Jydoj5Tj
— Rich Smith (@richsssmith) August 25, 2020

Mini-watermelons tumbled out of the Amazon Go on Capitol Hill: One person unbolted a Pike St and Summit pedestrian crossing sign and tried to ram the windows at the Starbucks Reserve, but the plywood protecting the windows held strong. A few parking meters and even fewer security cameras met their match. At the West Precinct, protesters tried (and failed) to push over the giant cement blocks barricading the station. The windows of a nearby police bus were broken, and the vehicle was smoking. The Starbucks next door to the West Precinct took some damage, and the front windows of the Starbucks on Broadway and E. Denny Way also got smashed. Some demonstrators picked up trash behind the march, and others explained the broken windows to the odd passerby expressing concern.

Along the way, some residents of apartment buildings did not take kindly to the targeted property destruction: One gentleman expressed his displeasure by calling the crowd "a bunch of cunts." Another called them "a bunch of animals." Residents at the YouthCare Orion Center offered protesters a warmer welcome, raising their fist in the air as the crowd hoofed it up Denny.

At around 11:40 p.m., the crowd gathered again outside the East Precinct: People threw fireworks at the garage door on 12th Ave, and someone lit a fire outside the station. After a couple minutes of that sort of thing, Seattle Police baton-charged the crowd. The protesters retreated, and some lit a couple small fires in the middle of Pike St before all eventually dispersed. Police said they "took one person into custody for investigation of arson," and added that one officer was injured. One protest medic told me he treated four protesters for minor injuries.

Auburn cop charged with murder in Jesse Sarey case pleads not guilty: Attorneys for Auburn police Officer Jeffrey Nelson, who shot Seray twice outside of a grocery store, "will likely argue that the shooting was in self-defense and that Nelson’s actions were 'reasonable under the circumstances,'" according to the Seattle Times. More on those circumstances here.

Body found near Longfellow Creek in West Seattle: Police told the West Seattle Blog Monday "that this all started with an investigation after a report of a hit-run crash in the area earlier today; near some debris left behind, the body was found."

Get your car washed free on Thursday: In celebration of its 63rd birthday, Brown Bear Car Wash "will follow their yearly tradition of offering free car washes," according to My Ballard.