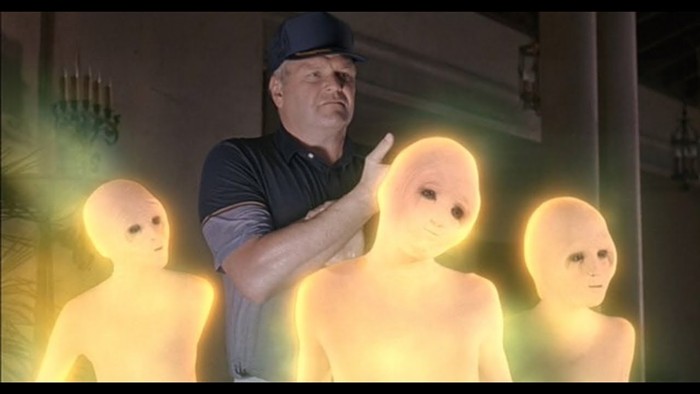 If you're thinking: "Unstreamable? In this pandemic?" Scarecrow Video offers DVD takeout and a great rental-by-mail service so you can safely rent rare DVDs during self-isolation. Click here to learn more about their program. 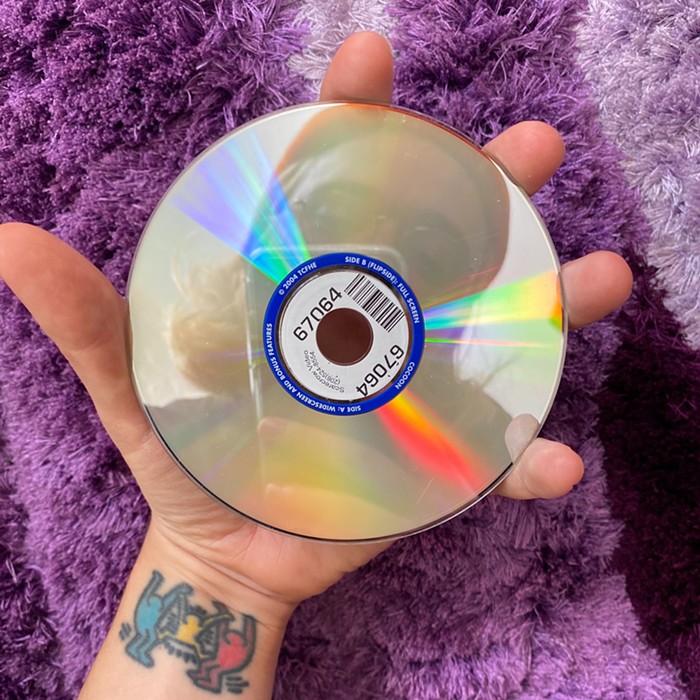 The alien light reflecting off this DVD makes you younger. CB
Ron Howard's 1985 sentimental sci-fi blockbuster Cocoon follows a group of senior citizens who break into their neighbor's pool and discover magical eggs in the bottom of it. Set in St. Petersburg, Florida, these are the type of old people who would now vote for Trump and threaten to shoot you if you stole their magical eggs. But it's 1985 and the Fox News hypocrisy would not set in for another decade. These looters get their eggs and they learn what the dolphins in Tampa Bay have apparently known for millenniums: These alien eggs, which have gathered power for ~10,000 years at the bottom of Tampa Bay, give you eternal life. They also make you horny. Lots of old-people fucking in this film.

Having grown up in St. Pete, I was raised among retired snowbirds who felt they were living out Cocoon's promise. I'm sure they thought "there's some magic in the Tampa Bay" while buying up all the coastal property and fucking. What puzzles me about Cocoon isn't the magic eggs or the squeaky dolphins or the hot little alien bodies, but why the aliens were so chill when these burnt senior citizens stole their 10,000-year-old ancestors' energy. If you came back to Earth to retrieve your ancestors only to find out Wilford Brimley stole their mana, would you be chill about it?! I wouldn't!! CHASE BURNS 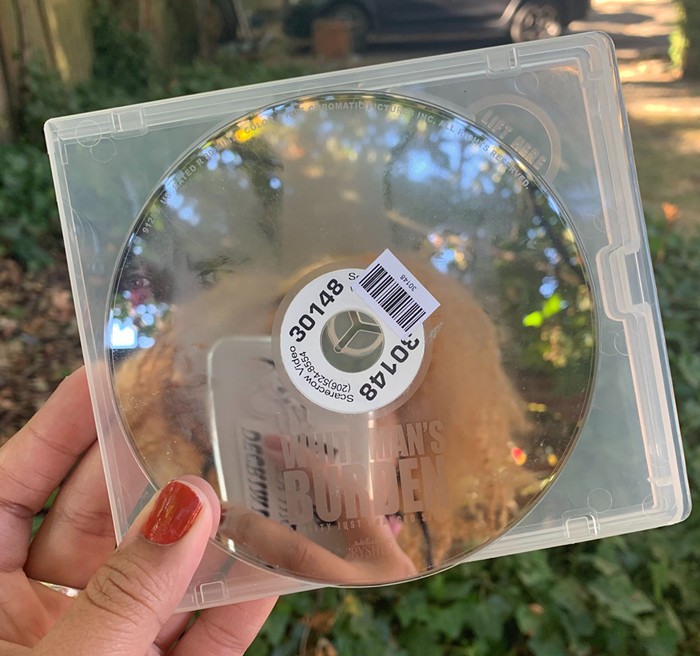 A DVD out in nature. JK
Films or televisions shows based on "What If?" scenarios—What if the Nazis won World War II? What if gender roles were flipped? What if Africa colonized Europe?—start from a creatively impoverished place. What begins as an exercise in trying to examine power structures often turns into a giant wankfest. Which brings us to White Man's Burden.

While flipping this racial dynamic is meant to demonstrate the ills of racism, White Man's Burden still centers whiteness. Your sympathy is meant to lie with the white characters, not the Black ones. Not even Harry Belafonte's natural onscreen charm, or John Travolta's diligently maintained hairline, could save this film. JASMYNE KEIMIG 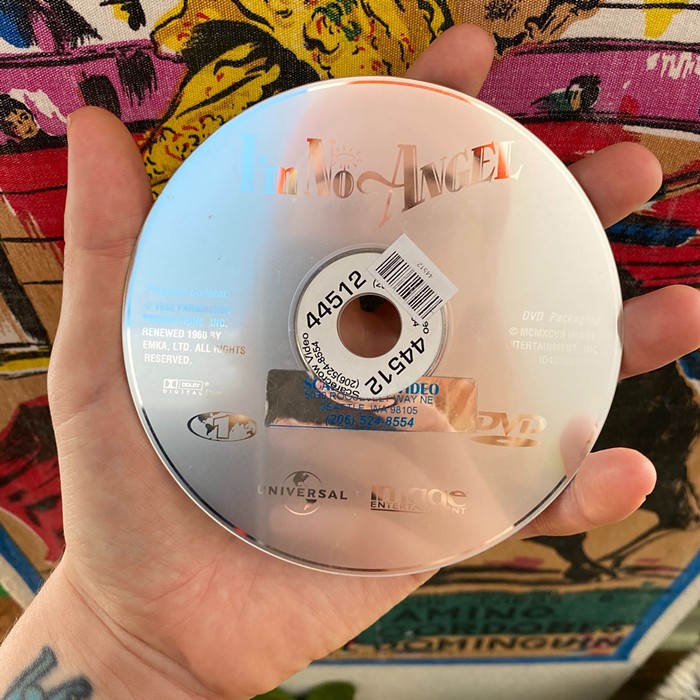 This was so hot in the '30s. CB
I'm No Angel is a rare Mae West film that didn't undergo a bunch of censorship. So you get to see West be super sexy, which means West does a few shimmies, says some polite-but-saucy shit, and performs a low-energy burlesque dance where she holds up a sheet and—without energy—goes, "Ooo. Ooo." It's funny. West comes across as a mix between Betty Boop and Roseanne Barr. (Boop was actually modeled after West.)

Mae West wrote the story and screenplay for I'm No Angel, which co-stars Cary Grant and went on to become Paramount's biggest film of 1933. It was released directly after She Done Him Wrong, also starring Grant and West.

While West's story doesn't make much sense, the gowns are spectacular, the one-liners and winks are good, and Cary Grant is tall. West famously took credit for discovering Grant, but that wasn't true. Grant had starred in Blonde Venus with Marlene Dietrich in 1932, and he resented West for taking the credit. Some real Old Hollywood fag hag drama. CHASE BURNS

Available for rental on DVD at Scarecrow Video and Netflix DVD.
***
THE 4TH MAN
The Netherlands, 1983, 103 minutes, Dir. Paul Verhoeven 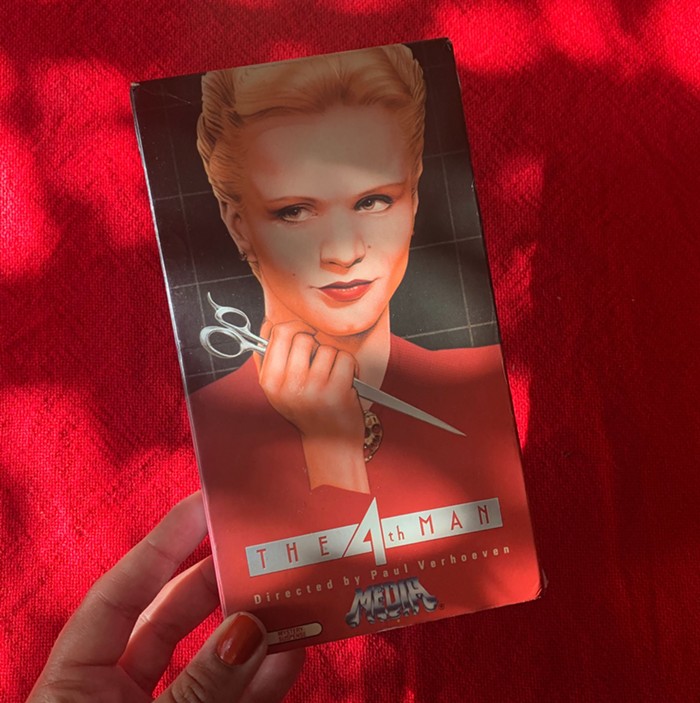 The 4th Man is delightfully gory and full of style. The scene where Gerard gets sucked off by Herman inside of a tomb as he realizes Christine is responsible for her three ex-husbands untimely deaths is iconic—to me. The power she has! While some could say Gerard contributes to the stereotype of bi people being inherently lecherous, unhinged, and just generally untrustworthy, I, for one, am happy for the representation.

Available for rental on DVD at Scarecrow Video and Netflix DVD.
Unstreamable means we couldn't find it on Netflix, Hulu, Disney+, or any of the other 300+ streaming services available in the United States. We also couldn't find it available for rent or purchase through platforms like Prime Video or iTunes. We don't consider user-generated videos, like unauthorized YouTube uploads, to be streamable.