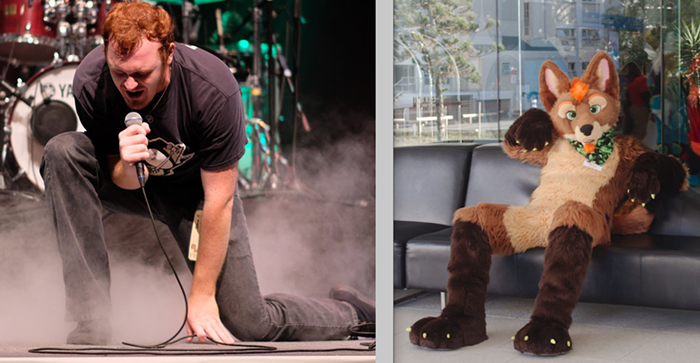 Portrait of the artist as a young yote. Pepper Coyote
If you doomscroll for long enough through last night’s footage of the police riots in Portland, your eye may settle on a particularly compelling dispatch from outside of an ICE facility. “As Protesters start to trickle out ‘No cock like Horse cock’ plays from the loudspeaker,” tweeted Cascadianphotog Media, with an accompanying video to prove that yes indeed, as cops stood around in their brawly-boy uniforms a loudspeaker blasted them with a song about horse cock.

So what the hell? What’s going on here? Is this some kind of Portland in-joke? Is this the soundtrack to a Charles Mudede film? Is it some kind of youth-oriented meme? Allow me to offer at least something of an explanation.

“I have a theory about how it ended up there,” says Pepper Coyote, the former opera singer and furry who wrote the song back in 2015. Pepper is a Phoenix-based indie musician whose music tends to focus on the furry fandom, working with bands like Foxes and Peppers. For the last two years, he’s been creating music full-time for the furry community — “it’s just a different audience, like any indie musician has” — and five years ago, when it was just a side-gig, he was approached by a prospective client.

At the time, a new Fallout game was about to launch, and Bad Dragon — which I’m sure you already know is a sex toy company with a furry focus — was looking for some way to do an unofficial tie-in with the game to promote their own line of post-apocalyptic toys.

“They were like, ‘What of the Fallout aesthetic do people like?’” Pepper recalls. “And one was the music.”

The games are set in a wasteland and soundtracked with authentic atomic-age retro-jingles, and Bad Dragon wanted Pepper to create an album of old-sounding songs with super filthy lyrics to promote their products. After handing in such songs as “Nuclear Love,” “Ode to a Werewolf,” and “Back End Blues,” all of which are quite catchy, Pepper got some feedback on the Blast Radius album: “They said, ‘This is not dirty enough.’”

And so, “No Cock Like Horse Cock” was born, a wonderful bouncy folk-pop tune with a sort of Moxy Früvous or Jonathan Coulton-y vibe and lyrics like “'Cause there is no cock like horse cock/Send your asshole into shock/You need horse cock of course-cock/Grab the lube and slam the day away.” It ends with scatting.

After its release, the song found longevity on Twitch, since some streamers allow viewers who donate money to choose the next song that plays. “No Cock Like Horse Cock” turned out to be a frequently-requested tune, and so it wormed its way into the ears of the Extremely Online.

As for how it wound up in Portland, that’s a bit less clear. Protesters have incorporated amplified music into recent actions, on occasion hacking into police scanners to play memey music. How did they find Pepper’s song? His best guess is that he came to the attention of PNW protesters after he did a cover of the theme song for the podcast Behind the Bastards, hosted by Portland journalist Robert Evans.

Whatever led them to play his song, Pepper says, he’s delighted to see it used for something more purposeful than Twitch trolling.

Let it be known, my song may be be blasted to support pro BLM, anti- police brutality purposes. I give permission.

One Dead, Five Injured from Shooting at Black Lives Matter March in Portland