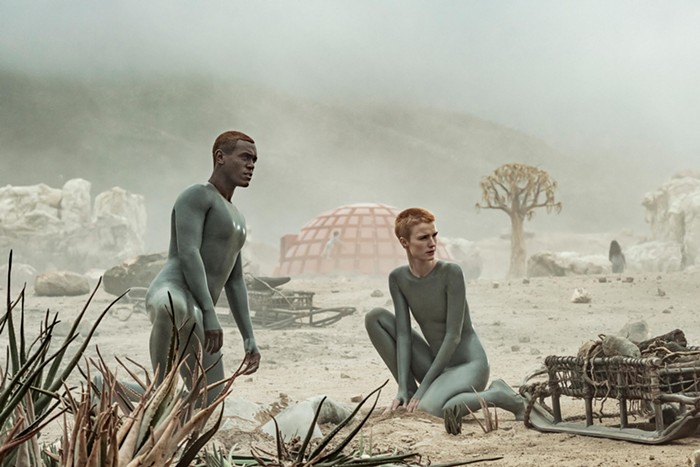 HBO
Raised by Wolves is a new HBO science fiction show that has five episodes. Sir Ridley Scott directed its first two, and his son directed the the next two. Sergio Mimica-Gezzan directed the final episode. As this post progresses, I would like you to keep the last named director in mind.

Raised by Wolves begins with a falling star. It is a spaceship that lands on a planet called Kepler-22b. In the spaceship, which is small and shaped like the kind of smooth pebble you might find along the bank of a river and decide to keep, are two androids named Father and Mother. The father is black, and mother is white. They are Adam and Eve.

The implication of this racial coding is that the colors of humankind spring from this primordial miscegenation, but let's not get into that in this post. Let's instead turn our attention to the androids, and focus not on their mission, which is to seed a dusty planet with humans, nor on their place in the kind of science fiction cinema that Ridley Scott initiated in 1979 with the film Alien (a shot in the second episode, "Pentagram," of a dead and decapitated android makes this clear enough). Rather, let's focus on the blunt fact that they do not believe in God. The humans do believe in God, or at least some of them do, but not the androids. They are strict atheists.

At this point, you must ask me: Why is this strange? What are androids supposed to believe? They were made by humans. They know their creators. Humans are the ones who are supposed to have the hang-up about God. Who made them? Accidental material processes that somehow enclosed themselves, remembered themselves, and reproduced themselves from some microscopic spot and, very eventually, expanded into the gigantic living things composed of trillions upon trillions of highly-organized microscopic cells, each containing about 3 billion years worth of information about how to grow, survive, and reproduce on Earth? The androids must consider themselves lucky to say, as the androids do in Raised by Wolves, that they are non-believers and forbid praying. For them, "the all" is simply about, to use the words of the great French biologist Jacques Monod, "chance and necessity."

There is only a chance, and not a very good one, that the androids will succeed in seeding this strange but still livable planet. It is a matter of calculation, measurement, reason-directed action. The humans presented in the opening episodes, on the other hand, see and believe they live in a God-fevered universe. Their religion, called Mithraic, is a mutation of Catholicism, and its members didn't spend much imagination naming their spaceship: the Ark. (It is hard not to hear in this spaceship the dub of the gigantic Mormon spaceship, Nauvoo, in The Expanse) Earth is in ashes, humans need a new home—an old sci-fi story. God will lead and protect them. And it is here we must bring up the director of the final episode of Raised by Wolves, Sergio Mimica-Gezzan.

The Croatian-born director contributed key and early episodes to the outstanding 2004 reboot of a very bad '80s TV show, Battlestar Galactica. Why is this at all relevant? Because one of the most fascinating elements of the reboot is the androids, who are the enemy of humanoids, do not just believe in God. They are positively God-mad.

Here we have human-made machines who do not believe humans are enough. There must be more to the universe than their direct creators. The humans, however, are not very religious, if at all. They are committed to science, evolution, an autocatalytic universe. This atheistic commitment is fine if you are on a planet with lots of living things (it's easy to be godless if you are in a forest or city) but becomes trying when you are stuck in the emptiness of space, and all this space ever does, day in and day out, is make more space. As with the spaceship drifting forever in Aniara, a Swedish science film, suicide rates spike in the Colonial Fleet on Battlestar Galactica.

More interesting yet, the humans on BG never seem interested in the android's religious fevers. They must think it is a bug in their software or something. Also, the androids search for the humans with the same intensity one may search for an ultimate creator of all things. One of the weaknesses of the show, however, is it presented this fascinating premise but failed to fill it in with a history or provide a signpost that directed us to the possibility of a deep explanation. The androids just talk about God all the time. And that's about it. No church, no praying, no nothing like that.

But the androids on Raised by Wolves learned their atheism from their creators, and in this respect are less interesting. Also, it's easy to see them really as hyper-cosmopolitan urban people who bike everywhere, do not touch meat, and recycle everything. They are slim. The humans in the spaceship have weight. They look like they are from planet Texas. But a robot who believes in god will always be more interesting than one that does not.