Have the Birds Left Seattle? Or Did the Smoke Kill Them? 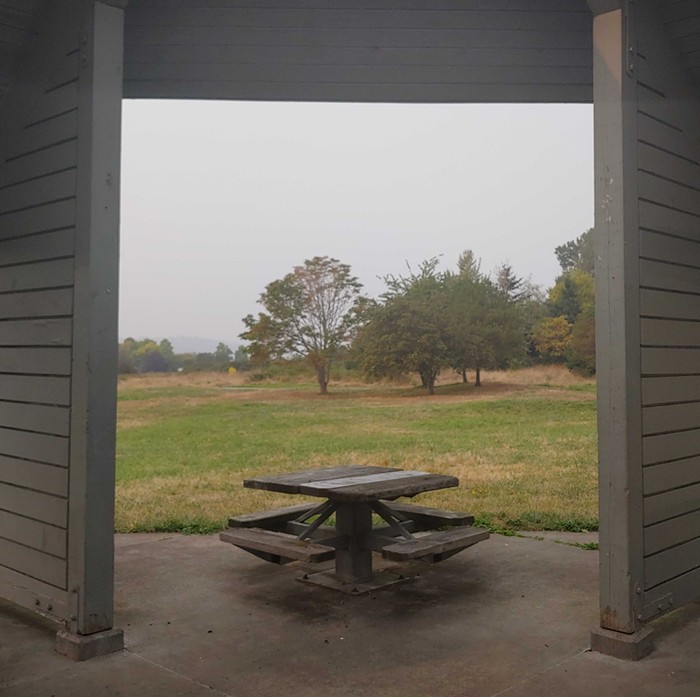 No birds in Genesee Park; just crows. Charles Mudede
Last night, I was spooked. It was 3 a.m. The smoke by my dooryard, where I stood, made ghosts of the surrounding homes and street lights. The sky was starless. As I took a drag of a pre-rolled CBD joint, I thought: "When clouds cover the sky, I know the stars and moon are still there; when it's smoke, I do not have this certainty. I feel and even fear they may not be there. Why this feeling?"
Sponsored

At that moment, I heard a bird that sounded small. It was alone and flying somewhere above my neighbor's backyard. It squeaked in both the formal and informal sense of that word. Its high-pitched cry barely pierced the living world. I had never heard a bird sound so alone. The smoky night made it sound like nothing would ever answer its call. It flew over my head. I entered my house, returned to bed, and sunk almost immediately into a death-like sleep.

This morning, I opened the Seattle Times and found this story: "Seattle is in smoke. What’s happening to the birds?" Indeed, where was that night bird now? And where were the birds this morning? Waste management trucks made the only sounds on my street. But I did hear those horrible crows.

Nothing ever stops that animal. The black alive of Joyce's grey alive. But those pretty avian sounds of only a few days ago were no longer there. "You haven’t been the only one who’s wondered what happened to the birds," I read in the Seattle Times piece, "The wildfire smoke descended on this region, and just like that, for some of you, the birds you used to see in your backyard mostly disappeared."

According to the article, written by Erik Lacitis, many bird-lovers are convinced something really bad has happened. They were here before the smoke, and now they are suddenly gone in smoke. Are they all dead? What if they are falling out of the smoke and into the ocean, pelting the Pacific? Dead feathers on the waves....

This is without a doubt a vision felt by the more emotional types. The rational types, such as Washington Department of Fish & Wildlife biologist Joe Buchanan, tells us all is in order. The songs are gone because it was time for the birds to fly to Mexico and even to South America. It is only the superstition wires in the human mind that have connected two completely unrelated events: the smoke blown from Oregon and the reduction in bird songs.

I went to my park to test the rationalist's position. This park, Genesee Park, is beloved by so many birds. Indeed, it looks like a mini-nature reserve that has been around since days that followed the Ice Age and the Missoula flood. We can see a Kennewick Man feeling at home here. But this impression is an illusion. Geneses Park is in fact related to New York City's Freshkills Park, which was "once the world’s largest landfill" and is now becoming a "wildlife habitat." The section of Genesee Park that connects with Lake Washington Boulevard was for many years the infamous Rainier Valley Dump. People threw whatever needed never to be seen and dealt with again into this nothingness by the lake. Even to this day, no one knows what kind of rubbish is buried in this park. No records were kept.

Then began [after World War II] a long period of "sanitary" (garbage) filling between Genesee Street and the boulevard - the smell, rats and seagulls being of great annoyance to the community until it was completed in 1963. Compaction of the fill was somewhat hastened when parking was permitted after the development in 1957 of the Sayres hydro pits for the Gold Cup races during Seafair.

Before it was just rubbish, the park was underwater. Before the Montlake Cut was completed in 1917, and connected the small Lake Union with the large Lake Washington, much of this area was in a twilight of water. One hundred and five years after the larger lake lost nearly nine feet of water to the smaller one, there are homes, apartments, streets, cables, new-growth forests, and this park. Along with the birds. And also this picnic shelter, which has the appearance of a bargain-basement pagan temple but enjoys a splendid view of the fabricated wildlife habitat (or the Disaster Eden). The swallows love it here in the summer. They fly just above the grass, which is regularly cut by park maintenance people for no good reason, feasting on insects that are feasting on flowers. There are also rabbits and other creatures (synanthropic and not) that believe they are in the wild.

I have not been to this park since the smoke blew into town. The virus limited me to the area near my house in Columbia City. The smoke locked me in the house. Today, September 17, which is still smoky, but not as bad as it was yesterday, I sat in the shelter and looked and listened for the birds. There were no swallows at all. At some moments there was nothing but the drone of a plane up in the smoke and the sweeping susurration of the autumn-turning leaves. The peace was always broken by the crack and rattle and beef of a crow or two or three. That bird is with us all year.

Have the swallows flown to South America, which is usually their plan when the summer ends? Maybe they decided to leave early this time. Seattle is not like how it used to be.

Before ending this post, let's read Sherwood on the origin of the name Genesee:

GENESEE first appeared in 1904 on a plat filed by W. C. Squire of The Union Trust Company; an area just west of the playfield. Genesee is a Seneca word "geneseo" meaning "beautiful valley" and was descriptive of a river valley in New York State. It indicates the quality of the slough in pioneer is days (Genesse is now the name of that New York county; and the also geologic rock outcropping found there.)