How to Look at Louise Bourgeois's Eye Benches I, II, and III 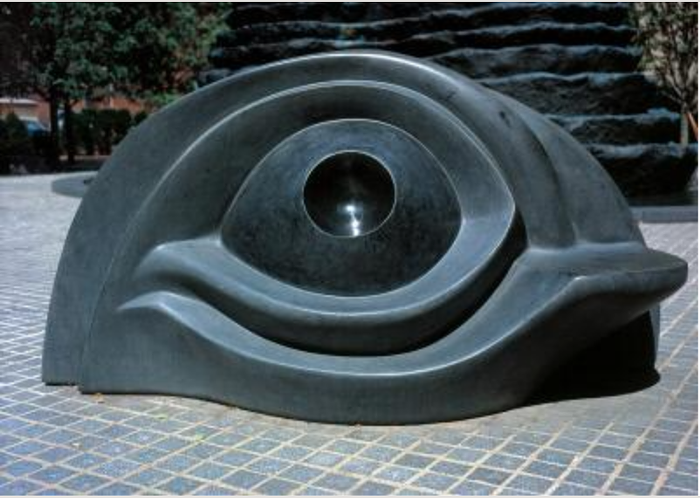 I wanna live in one of those smooth folds. Courtesy of SAM/C.E. Mitchell
There are thousands of ways to look at things. This is just how I do it. Twice a week, we'll look at art that comes from Seattle, the world, and the past.

Placed at one of the Olympic Sculpture Park's main entrances are Louise Bourgeois's Eye Benches I, II, and III. The three sets of two "eyes" vary in style and space for seating, yet are all composed of the same Black Zimbabwe granite and forged by Italian stonemasons. The smooth pupils and heavy folds of the lids seem intimately anatomical and betray a world-weariness that feels magnetic.

I remember lounging on them during a non-pandemic summer, lulled by the warmth radiating off the stone on a sunny day. It's a dreamy experience to sit on the back of an eye. A surreal proposition that makes your observations of people, sky, park, and mountain so literal.

This dreamy nature is a recurrent theme in Bourgeois's work, who heavily pulled from the exploration of memory and surrealism. The Eye Bench series was completed toward the end of Bourgeois's life, as she began to pivot more to sculptural work. The most famous of those pieces are her gigantic steel spiders.

"There is a pleasure in sitting outside and watching people walk by. You look at them, and sometimes they look back at you. These encounters and perceptions interest me. In this sense, the Eye Benches relate to the story of the voyeur. . . . Whether it is an eye that sees the reality of things or whether it is an eye that sees a world of fantasy. . . . It is the quality of your eyes and the strength of your eyes that are expressed here. Nobody is going to keep me from seeing what is instead of what I would like.”

I think it's fitting that when looking at and lounging on her Eye Benches, associations begin to litter my brain. It's as if seeing this art regarding me as much as me regarding it forces my view inward: Looking at "Eye Bench II" reminds me of Luis Buñuel and Salvador Dali's 1929 short film Un Chien Andalou, and the sequence where a razor blade seems to cut open a woman's eye. It's an image that haunts my brain. The sounds of "Debaser" by The Pixies—itself inspired by Un Chien Andalou—knock around in my ears as I sit on "Eye Bench III."

Have you ever sat on one of these eyeballs and had a big thought? I'd love to hear about it.