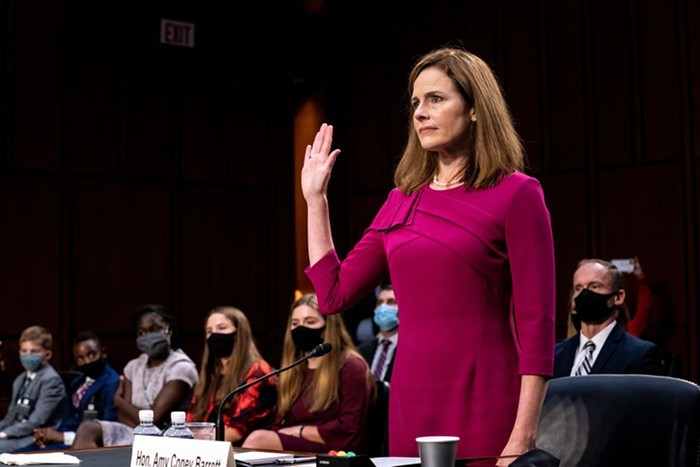 Absent from her record is anything that can be described as expressing concern for the Black world. ERIN SCHAFF-POOL/GETTY IMAGE
In the noise and bustle of Amy Coney Barrett's illegitimate Supreme Court appointment, we must not stop wondering why she—a white person whose work and alliances and politics, when tallied up, have done more harm than good to Black people—raises Black children. What is her game?

Some White colonizers "adopted" Black children. They "civilized" these "savage" children in the "superior" ways of White people, while using them as props in their lifelong pictures of denial, while cutting the biological parents of these children out of the picture of humanity. https://t.co/XBE9rRnoqq
— Ibram X. Kendi (@DrIbram) September 26, 2020

Those who think that this decoding is completely uncalled for have committed much of their historical understanding (an appreciation determined by what one forgotten French philosopher called a "maximum grip") to a world whose entire existence is fantastical. Also, are you going to believe Kendi's point of view or Barrett's? We already know the latter is in the business of lying. When it suited her, she thought replacing Justice Antonin Scalia with a liberal was wrong. Now that it doesn't suit her, she, a conservative, is replacing a liberal. So, as far as truth goes, we can dismiss Barrett. There is none of that in her. But let's go back to her Black children.

The Black savage/white savior meaning-producing unit is real and still in operation today. Its echo was clearly heard even during the final presidential debate for the present election cycle: "Nobody has done more for the Black community than [me]... with the exception of Abraham Lincoln." This is the opinion of a person who nominated Barrett. He expressed a feeling generated by the Black savage/white savior meaning-producing unit. It's called the white man's burden. The reference to Lincoln is a big part of this feeling.

In the past, white people used Blacks for free labor. Today, a white woman like Barrett used Black bodies apparently for a political end (which is still exploitation). This has to be the case because absent from her record is anything that can be described as expressing concern for the Black world.

But what is a Black world? And why does it matter?

Let's begin with the country Barrett is from, the United States of America: Its Black population is its poorest population. Next, we can move on to the children Barrett adopted. They are from the Black nation of Haiti, which is the poorest country in the Western Hemisphere. And finally we can turn to the continent that all Black Haitians and Black Americans are originally from, Africa: It is the poorest continent in the world. Why do we find Blacks in the poorest population, the poorest nation, the poorest continent? The white supremacist answer is, of course, Blacks are inferior. In this view, it is in their nature to be less than human than white humans, to depend on food stamps, or on Western aid. If this were not the case, then how is it that Blacks are always the poorest where we look?

And then there is the massive debt that France imposed on Black Haiti for depriving white slave owners of their property (this is called the Haitian Revolution, and the debt, compensation for liberation, was paid between 1804 and 1947). Lastly, Black Americans got nothing for the 400 years they worked for nothing. And in the 20th century, the US government gave Blacks what the theologian Martin Luther King, Jr described as a bad check (the main concern of the March on Washington for Jobs and Freedom).

From this history emerges a Black world that concerns Black people to this day. This world is instructive. It explains what the challenges are, what one is up against, when to be alert, when to fight, when to retreat, and how to maintain some mental balance under relentless racial stress. It is true these instructions can be transmitted by a non-Black person, but for this to happen there must be real concern for the Black world. And concern can only occur with an understanding ("maximum grip") of the world that structured and continues to structure this form of feeling.

Barrett does not know this feeling, and if we look at her record we find she has only intensified it and the world it expresses. First, she was nominated by a white supremacist, a fact that did not phase her in the least bit. Second, she was closely aligned with the late and racist Justice Antonin Scalia.

Here is what the Center for American Progress has to say about Scalia:

...[T]he fact that Justice Scalia’s right-wing acolytes revere him for giving so charming a voice to their reactionary views illustrates how damaging the late justice’s 29-year-tenure on the Supreme Court has been to the cause of civil rights and race relations. Indeed, Scalia displayed a joyous, cherubic face while he wielded an intellectual Howitzer to blast away the hard-earned legal supports for racial opportunity that briefly followed the civil rights movement.

The list is long and damaging, reflecting a view of jurisprudence that is, to put it mildly, racially insensitive to black and other historically disadvantaged Americans. For example, in the 2013 Shelby County v. Holder opinion, he voted with the conservative majority, agreeing against the evidence and logic that the Voting Rights Act was a “perpetuation of racial entitlement” for black and other racial minority voters.

And about her, Barrett. How does she feel about race?

The Associated Press published a report on Ms Barrett's most notable judicial opinions, which included a 2019 workplace discrimination case in which she penned the opinion that the use of the n-word in the workplace had not "created a hostile or abusive working environment."

This is a white woman with Black children. Can you imagine a black mother saying such a thing in public? Really, why does Barrett have Black children? Why did she want them? To become one of the most powerful judges in the world?

The best one might say for Barrett is that the Black children are in her life to supply the sweetness of savior satisfaction. The structure of this feeling: She saved two Black people from the misery and many dangers of a very poor Black country, therefore she has done some good in the world. This is of course nothing but a derivative of charity, which is always something like a lottery.

Recall the devilish character in Charles Burnett's masterpiece To Sleep With Anger, Harry. He is played by Danny Glover. When talking to a pregnant Christian woman, Pat, played by a sex symbol of blaxploitation moment, Vonetta McGee, he explains his admiration for her and her husband's "volunteer work to help feed the poor."

HARRY
How many people do you all feed?

PAT
Last Saturday we handed out over
two hundred meals.

PAT
Week by week the crowds at the door
keeps getting larger. We can't feed
all the hungry.

HARRY
Of course not. Have you ever heard
of a man jumping in the river to
save five hundred drowning people?
No you ain't.
(pause)
You have to take just one and
fatten him up. When you spread help
too thin, you, you just nickel and
dime the situation. If you try to
save all, all die but if you save
one life, life goes on. You just
have to remember, medicine that
works leaves a bitter taste.
Is this what our "Christian" Barrett is about? She took two Blacks from a sea of drowning people and fattened them up? An act of kindness that, in her eyes, offered an exit from the only question that matters: Why are so many of these people drowning in the first place?

Charity is always nothing more than this fattening of a few, this is why the rich are such big fans of it. They say: "Don't tax us; instead let us support some charity." With charity, the cruelty of cultural individualism can persist. Only with taxes is this culture vitiated. I will have more to say about cultural individualism in another post.