Pop Art You Can Reheat 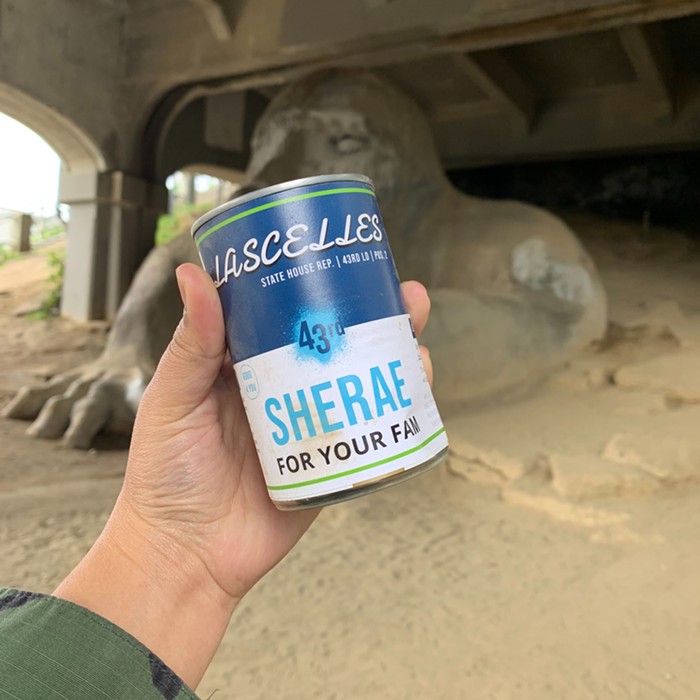 I crawled along so many streets in the 43rd looking for one of these bad boys. JK
During election season, Seattle's residential neighborhoods become littered with flimsy campaign signs blaring the names of political candidates who don't understand color theory. And then, come a day or so after the election, residents promptly sweep this part of the city's visual fabric straight into closets and garbage bins.

But yesterday, I spent a good chunk of my afternoon frantically trolling the streets of the 43rd District looking for a spontaneous political advertisement that doubles as a street art installation and triples as, well, soup cans. These aren't normal cans. They are Sherae Lascelles Soup Cans, an outreach effort that includes masks and reusable straws on behalf of Sherae Lascelles, the Seattle Peoples Party candidate for Washington's 43rd Legislative District.

Over the past week, these literature-wrapped Campbell's Soup cans have popped up around the variegated district, which encompasses parts of downtown, Fremont, Wallingford, the U District, and Capitol Hill. The Lascelles campaign has distributed the goods near libraries, free pantries, bus stops, shelters, parks, monuments, and arterial roads across the 43rd.

Sherae for State, for your fam! These cans have been distributed across the 43rd district, find the nearest to you and tag us in your picture with it!

Hot Tip: If you don’t need the soup, take off the label to keep yourself & share/donate the soup to those who need it more. 💙 pic.twitter.com/fuwY7EcCSK
— Sherae For State (@SheraeForState) October 22, 2020

The Lascelles campaign says the cans are part of an effort to meet people where they're at, to "show up materially for the community" by providing the district with on-the-ground campaign literature that they can also eat for lunch. With new drops every day, the cans of cream of mushroom, chicken noodle, and tomato soup appear in neat little pyramids around the district, like edible street art-cum-advertising.

The navy-blue-and-lime-green label includes information about voting, as well as Lascelles' political platform. There's an ingredient list, but it includes pantry staples like "Defund the Police Concentrated Broth," "Decriminalization Purée," and "Reinvest in BIPOC Communities (Added as a Preservative)"—all things Lascelles says are "based on what we need out of the platform" and what they will do if elected to replace longtime incumbent Rep. Frank Chopp.

"There's a large population of people in our district that have no home at all," Lascelles told me this week when I asked them about their decision to use soup cans to promote their campaign. "Yard signs aren't going to speak to them or change their perspective on electoral politics."

Cans in the wild. JK
This soup can project, of course, brings to mind another culture-shifting soup work: Campbell's Soup Cans by Andy Warhol. The late Pop Art icon debuted the 32-painting series of the quotidian soup cans painted on canvas in 1962. The series was part of a (then relatively new) movement in the art world that challenged viewers' ideas of "fine" art by referencing images, faces, and brands from pop culture that made up the fabric of their lives.

Lascelles told me they were "absolutely" thinking about Warhol and his Campbell's Soup cans when creating their version to put onto the streets. But the Lascelles campaign's cans make an important riff on Warhol's, mainly by highlighting the Popular in Pop Art. These cans aren't just for the few, but for the many. Placing the cans in spaces we all have access to, regardless of our backgrounds, pushes the populist vision of Pop Art to have material results.

Lascelles made sure to mention that "there's no right way to need the cans."

"I think it was the best way to show the values of the campaign, as a whole," they said, "by being able to actually provide tangible sustenance to the community that has a value other than just me seeking someone's vote."

New Savage Lovecast: This Proctologist Gets It