How to Look at Panel 16 from Jacob Lawrence's Struggle: From the History of the American People 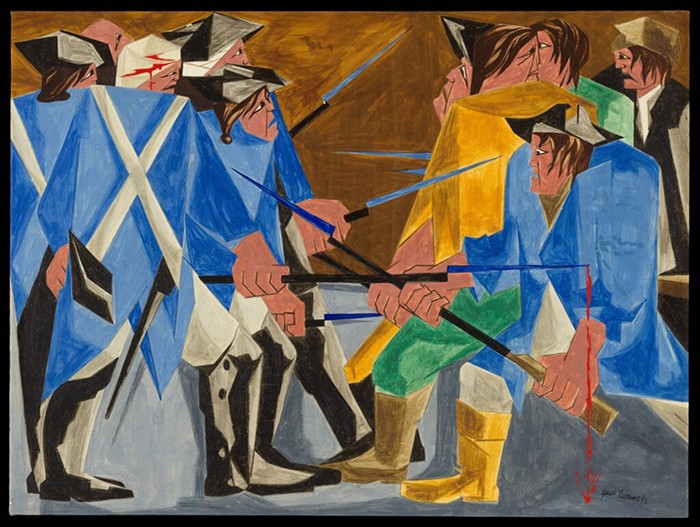 We love a returned long-lost painting. The Jacob and Gwendolyn Knight Lawrence Foundation, Seattle/Artists Rights Society (ARS)
Jacob Lawrence was a storyteller—and I don't mean that in a hokey, evasive way. He intended his art to record and pay tribute to Black-American and Afro-diasporic peoples' history across the world. The Migration Series, his most well-known work, charted the story of the Great Migration of Black-Americans from the South to the North; The Life of Toussaint L'Ouverture captured the leader of the Haitian Revolution; The Legend of John Brown chronicled the white abolitionist's life and death, and so on.

Lawrence's paintings are modernist and clean but incredibly dense—the semi-abstracted bodies collapsing in on each other, the angular faces, the flatness and repetitive use of color. Studying one of his pieces feels just as much like reading a text as it does looking at something. So when a panel goes missing from one of his series, it's as if we're missing a page in a history book.

That's why it's delightful that a painting from his Struggle: From the History of the American People (1954–56) series, thought lost to time, was found in a Metropolitan Museum of Art visitor's neighbor's apartment last week and now hangs with the rest of series. Here's the New York Times on that discovery:

The neighbors had purchased the small painting by the renowned Black artist for a very modest sum at a friend’s Christmas charity art auction in 1960, to benefit a music school. They are an elderly couple and asked the Met and The New York Times that they not be identified to protect their privacy. They are not art collectors; they had only become aware that their painting of confrontation between soldiers and farmers in Revolutionary War times might possibly be part of a larger series when they read stories about the Lawrence exhibition premiering earlier this year at the Peabody Essex Museum in Salem, Mass., and the curators’ efforts to locate the lost works. Last week, the couple finally contacted an art adviser to help them navigate the Met, one of the country’s largest museums.

The fact that a painting by one of the most celebrated artists of the 20th century was just hanging in some elderly couple's NYC living room aside, the public has not seen this particular panel since 1960, and no photograph of it existed before today. It depicts Shay's Rebellion, an uprising by ex-Revolutionary War soldiers-turned-farmers who "opposed state economic policies causing poverty and property foreclosures."

It fits in chronologically with the rest of the series that chronicles the American Revolution and the country's first few decades. As the Times' notes, the back of the panel is signed and dated, and the "angular, Cubist composition" is in line with the other works on display. I particularly love the mess of hands and feet on both sides of the work; the rebel farmers' messy hair and their big, blocky hands; the bright red blood against the scene's muted tones. Like with a lot of Lawrence's work, you benefit from a long, good look.

Four panels from Struggle, which was reunited for the first time this year and is coming to the Seattle Art Museum in 2021, are still missing. Start peeking into your elderly neighbors' living rooms—who knows what you might find.

Tags: Visual Art How to Look