"But in the future, I'm not going to lie, I do want a bulletproof vest now," she said. 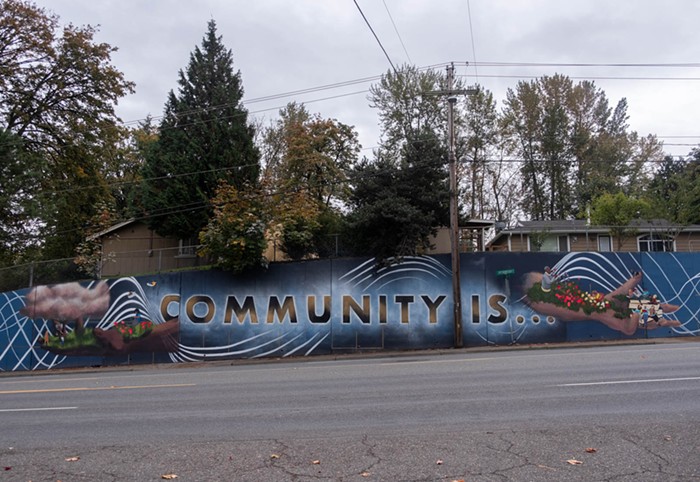 The completed mural where a man pulled a gun on three artists in late September. Courtesy of the Artist and Jordan Sommers
On September 29, Seattle-based muralist Mari Shibuya and her two assistants Perri Rhoden and Pua Nova were in the middle of working on a mural project on SE Petrovitsky Road in Renton. As Rhoden filled in a giant melanated hand, Shibuya and Nova stood about 150 feet away, painting another part of the mural, when a motorist pulled up beside their work station.

"All lives matter!" he repeatedly yelled at them from his stopped car, said Shibuya. They'd all seen this guy just a few days earlier, screaming similar Trump-inspired epithets like "God bless Trump” before speeding off. All of the artists involved were women of color—both Nova and Rhoden are Black women and Shibuya is a half Japanese-American woman. As the leader of the project, Shibuya took the responsibility to confront the man's threatening presence.

"This is who I am. This is who my team is. This is why we're doing this project," Shibuya told me, recounting her intentions while walking toward the man's car. "We were asked by the city of Renton, we engaged in the community process. What is your problem? You're part of the community. We want to engage you."

Then he pulled a gun on her.

There were several design constraints of the project that left Shibuya and her team particularly vulnerable to danger. A five-lane road buttressed the mural, with cars speeding near their workspace. Shibuya had to use a lift because of the wall's height, but with only a six-foot-wide sidewalk and no lanes blocked off, if she or one of her teammates fell, it would be right onto the busy street.

The city had employed workers to monitor the artists' safety, but nothing prepared them for this level of harassment.

As soon as she saw the gun, Shibuya said she yelled for Nova to get behind the steel lift, the most bulletproof object near her. Rhoden and Shibuya sought cover as a city employee, who was there monitoring the project, saw the man cock the gun and point it back at the artists. After a few more minutes of him yelling from his stopped car, the man sped off, at which point Rhoden called the police. Nobody was hurt, thankfully, but the artists said the experience deeply shook them to their core.

Mari Shibuya (in the middle) with her two assistants Pua Nova (left) and Perri Rhoden (right) in front of their mural. Courtesy of the Artist and Jordan Sommers
Since the protests against police brutality and racism began this summer, extremists threatening demonstrators with their cars has become worryingly common. Protesters must routinely think about their physical safety before exercising their first amendment right to free speech—and that extends to artists as well. Shibuya said this wasn't even the first time she'd seen a gun get pulled during a mural project. While painting a George Floyd mural in downtown Seattle, an angry passerby showed her his gun after getting upset over the subject of her painting.

But for the Renton mural, Shibuya said she "absolutely" did not expect this level of harassment. After being awarded the commission from the city several months ago, she held five rounds of meetings with community members to determine what mural design would fit best along the busy road.

"The design ultimately was quite family-friendly—it was sourced through processes of having conversations about community with all generations," Shibuya said. The final project on the 200-foot wall features two hands holding flowers, books, and people existing together in peace against a gray abstract background. And in between those two elements are the words "Community Is..." leaving the phrase open-ended for the viewer to fill in for themselves. There was nothing on the surface that seemed too incendiary.

After taking a break from the project for a few days, Shibuya returned to work on the mural with a few artist friends while both Rhoden and Nova continued to work remotely from her studio for their safety.

The addition of increased police presence and a steel-lined box truck, designed to protect the remaining artists, did not prevent another white driver from shouting "fuck you" several times at Shibuya from his car before police stopped him. Two weeks after pulling a gun on the artists, the man returned to tag the mural with "TRUMP," "LAM," and "BOO," which, after being tied to similar series of incidents, eventually led to his arrest on Wednesday, October 21.

Originally estimated to take about two and a half weeks to complete, Shibuya finished the mural on October 19—a month and a half after they originally started. Despite the amount of harassment Shibuya received while working on this project, she thinks these incidents only prove how powerful art is during this time of mass uprising.

"There is power in art and how we visualize a world we want to live in," she said. "Diversity and inclusion includes all people—it includes white people." With her work, Shibuya said there's no desire to "erase the white man from the universe," rather a desire to see power shared more equitably. "I think that redistribution of power is what's frightening [for these white men]."

"But in the future, I'm not going to lie," Shibuya added ruefully. "I do want a bulletproof vest now."

Who's Making It Through Seattle's Primary Election?

Tonight: Cruise with Clara at Krem