Elizabeth Murphy in Penny Saunders’s Wonderland, all dressed up with no one to dance for. Lindsay Thomas
With the election now finally over for everyone but the President, for old times' sake I put on my cheap blue suit, poured myself an overpriced glass of wine, set a few chocolate bonbons on a cocktail napkin, and fired up my laptop to watch REP 2, Pacific Northwest Ballet's second digital offering of the season.

The show, which finished streaming Monday night, featured work from four women choreographers, including world premieres from Penny Saunders and Jessica Lang, who created their pieces under pandemic conditions. As a special bonus, PNB also partnered with principal dancer Noelani Pantastico and her Seattle Dance Collective to release a 10-minute dance film called ALICE, which was choreographed by Saunders and directed and filmed by Bruno Roque.

As with most attempts to pivot to streaming video, artists and institutions who embrace the tools of cinematography produce more successful work than those who just say "fuck it" and stream live with a dream that a taped performance or a live feed might serve as anything other than a sad simulacrum. Thankfully, the pieces in Rep 2, especially Saunders's Wonderland, hew to the former end of that spectrum.

PNB isn't trying to trick you into believing you're watching a ballet at McCaw Hall. They're embracing the camera, and curating haunting new dance vids that speak to our bleak and occasionally beautiful quarantine moment.

Rather than drop us in a world of swirling psychedelic colors, Saunders sets her Wonderland in McCaw Hall's big, black, carcass. Melanie Burgess's circus-chic costumes—with dancers suited up in minimalist, genderfluid ringmaster gear—provide the only splashes of color and filigree.

That said, the stage and house lighting turn the space into a stunning night sky, where the dancers play out their graceful little lonelinesses, which should draw tears from any drama kid nostalgic for that particular feeling of endless possibility present in an empty performance hall.

The piece opens with a high-energy number performed in the orchestra pit to a song that sounds like Tom Waits scatting, and then yields to a series of vignettes set to Michael Wall's intimate, spare piano. Saunders has the dancers using every part of the house as their stage. PNB principal Lucien Postlewaite offers a gorgeous, sort of manic Rapunzel solo from the balcony seats. It concludes with him casting a silent call across the empty auditorium and over to another principal dancer, Elizabeth Murphy, who then tumbles around the stage as if she were trapped in a dark dream of her own. In the final scene, the dancers shine rolling stage lights at one another, illuminating brief, searching solos that disappear into darkness.

Saunders makes several fun allusions to Lewis Caroll's trippy masterpiece—a spotlight becomes a rabbit hole the audience enters; a dancer in a red dress, who turns out to be Pantastico in her ALICE garb, spookily appears during transitions—but the narrative, to the extent that one comes through, ultimately tells the story of a world without art. It's as if all the dancers fell asleep during the apocalypse and then woke up in the aftermath with no one left to perform for except each other. And so here they are, dancing partly to fulfill the psychotic "show must go on" maxim, but also because performers, like any other artist—or anybody else, for that matter—come to understand themselves and the world through performance, and so what else are they going to do with some makeup and a stage?

And while we're on the topic, Saunders's ALICE pulls parts from Carroll's story that resonate with our quarantined brains, highlighting the titular character's on-edge lonely boredom and the identity crisis she faces in Wonderland. As a director, Roque embraces Caroll's wild physics to great effect—creating inverted worlds with mirrors and a mirrored table, and playing with perspective to change Pantastico's size. Pantastico shows off her range as an actor-dancer, convincingly vacillating from pure paranoia and poised ballerina. The video accurately reflects the weird, slow, existential panic of life under lockdown, where many of us are left wondering who the hell we are if we're only meaningfully interacting with one or two other people on a regular basis, but it also speaks to the larger moment of transition in a dancer's life. What happens to you when you turn 40 and have to stop doing the thing you've been doing 12 hours a day 7 days a week forever?

Back to Rep 2 proper, the excerpt from Twyla Tharp's Waterbaby Bagatelles pulls the show out of the ghostly and foreboding Wonderland and into a spritely 1980s music video. Lots of nervous playfulness to go around, and the performance carried that early quarantine energy, when the idea of doing isometric exercises on your apartment floor three times a week seemed like all you really needed to get through this thing.

Susan Marshall's Arms, featuring PNB dancers Miles Pertl and Leah Terada, ties for my favorite piece in the show. Though Marshall probably wasn't thinking of the various interpersonal trials that attend stay-home orders when she originally created the dance in the mid-1980s, it's hard to see it now as anything other than a meditation on a couple who face troubles after cuffing during quarantine.

In the intense, claustrophobic piece, Pertl and Terada stand beside one another wearing white shirts and black pants. They move only their upper torsos, flailing their limbs and heads around like those inflatable tube men outside car dealerships. Their attempts to support one another also end up blocking the other's progress, until finally their frustrated flailing yields to a complicated synchronicity that looks like the interior of an old Swiss clock. It's a fantastic, quick, arresting piece that perfectly fits the format.

You can't really see the weird geometric patterns in the costumes here, but you can see the near perfect parallel lines Elle Macy and Dylan Wald create with their bodies. Lindsay Thomas
I had trouble getting into Jessica Lang's Ghost Variations, which is the other big world premiere on this ticket, mostly because I kept getting distracted by Jillian Lewis's costumes. Lewis cut sharp, geometric lines into the tutus and patched the men's jackets with similar shapes that too closely matched the colors of the dancers' skin. So while the dancers performed beautifully—particularly Dylan Wald and Elle Macy, who executed a flawless duet toward the end of the piece—I couldn't stop looking at them and thinking, "Tetris flesh."

Anyhow, though Rep 2 is now over, you can catch Arms and an excerpt from Tetris Flesh for free at PNB’s gala show this Friday. They’re also presenting a PNB premiere from my favorite choreographer, Alejandro Cerrudo, called PACOPEPEPLUTO, which features three solos set to Dean Martin songs. So bust out your bonbons and your subpar formal wear, and get loose enough to write a check before Saunders’s sad “Wonderland” becomes a reality. 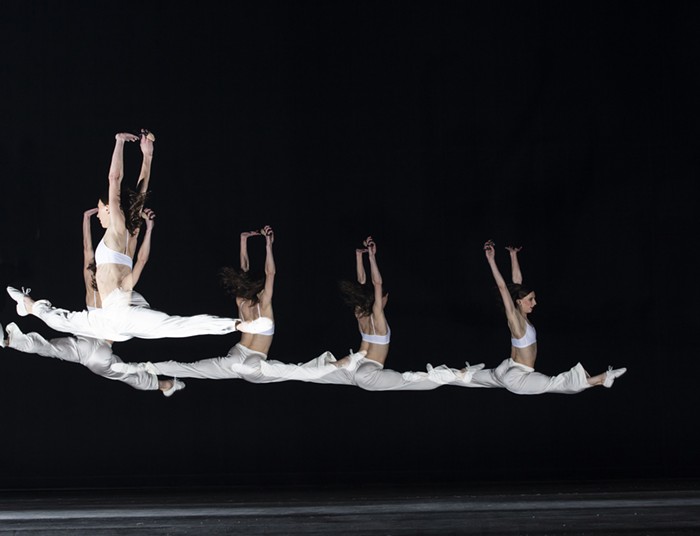