How to Look at Isamu Noguchi's "Floor Frame" 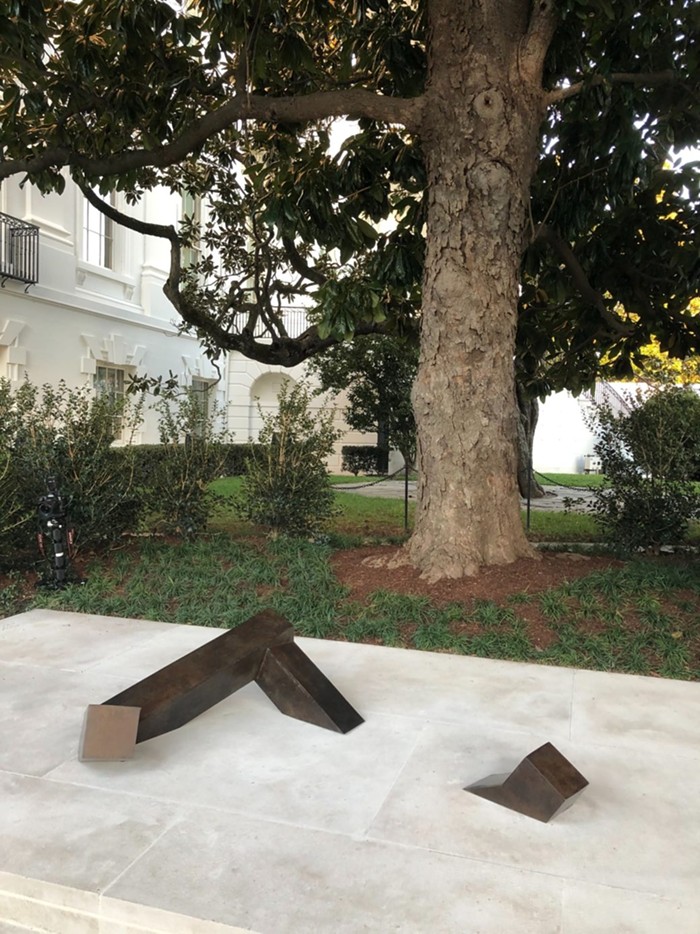 Perched on that cold stone surface! Courtesy of the White House Historical Association
On Saturday, outgoing First Lady Melania Trump unveiled a new art installation, "Floor Frame," on the east terrace of the White House's Rose Garden. The sculpture, by Isamu Noguchi, is the first Asian-American work to be inducted into the White House's collection. "The art piece is humble in scale, complements the authority of the Oval Office, & represents the important contributions of Asian American artists," the First Lady tweeted along with four pictures, the last of which is of her strutting down a hallway.

The minimalist 1962 bronze sculpture gives the illusion of a cube-like frame dipping just below the surface of whatever it rests on. According to the White House press release, Noguchi viewed "Floor Frame" as "the intersection of a tree and the ground, taking on the qualities of both an implied root system and the canopy of a tree." He hoped that by placing the sculpture directly on the ground, viewers would be more connected to the planet they call home.


Seattleites might recognize Noguchi's name from his 1969 work "Black Sun," which sits right on the edge of Volunteer Park's reservoir, framing the Space Needle when viewed from a certain perspective. The sculpture here in Seattle reflects themes also found in Noguchi's Rose Garden sculpture: forms culled from nature, a fluid relationship to the environment, the circular nature of time.

Noguchi's work at the White House, however, points to an unseen depth, a rooted system beneath the surface. If you held "Floor Frame" in your hands, it would be like holding the fragments of a bigger object. Its meaning becomes more apparent when you arrange it on the floor. It's clever that way.

Perhaps Melania's "complements" is the better of the two. Born to an American mother and a Japanese father in Los Angeles in 1904, Noguchi became a political activist after the Pearl Harbor attack in 1941. In May 1942, he voluntarily entered a Japanese internment camp in Arizona to teach Japanese art and improve housing conditions. His ethnic and political identity profoundly shaped his work as an artist and flies in the face of the Trump administration locking kids up in cages.

By placing this implied rooted system just steps outside the Oval Office, where Executive Order 9066 originated, "Floor Frame" might serve as a reminder of the office's destructive power and the endurance of the Japanese-American community. To observe and stand near it is to be reminded of the depth of our connections, which predate that house built with slave labor.