Visual Art • How to Look

How to Look at the Seattle Star Twice a week, we figure out How to Look at art from Seattle, the world, and the past. Today, we're checking out the Seattle Star. She's pretty. JK
I think the Christmas star perched on the southeast corner of the former Macy’s building is beautiful, and I'm a Christmas Grinch. Today, I gawked at the tiny LED lights, which look like tiny Seahawks-colored bubbles of champagne. The star's long elegant tail stretches from the top of the building almost down to the street. It stood out today, sparkling—even against the orange late afternoon sky and sand-colored building on which it hangs.

Seattle-based company Western Neon repaired and refurbished the newly christened Seattle Star (formerly known as the Macy’s Star) over the past year. Keeping the original design done by the downtown Bon Marché's late longtime in-house designer Bob James in the 1950s, Western Neon replaced over 4,000 incandescent bulbs with individually programmable LED nodes. It also restored some of the aged components of the original star.

Last year, Amazon, the current occupant of the building, paid Western Neon $250,000 to repair and replace the star, reported the Guardian, after an announcement from a Macy's spokesperson left many worried the rundown iconic fixture would stay dark and get binned. This year, Seattle Times writes that the Miami Beach-based building owner, Starwood Capital Group, threw the unwashed masses a bone and coughed up another $250,000 for this new-and-improved version of the 160-foot tall star. 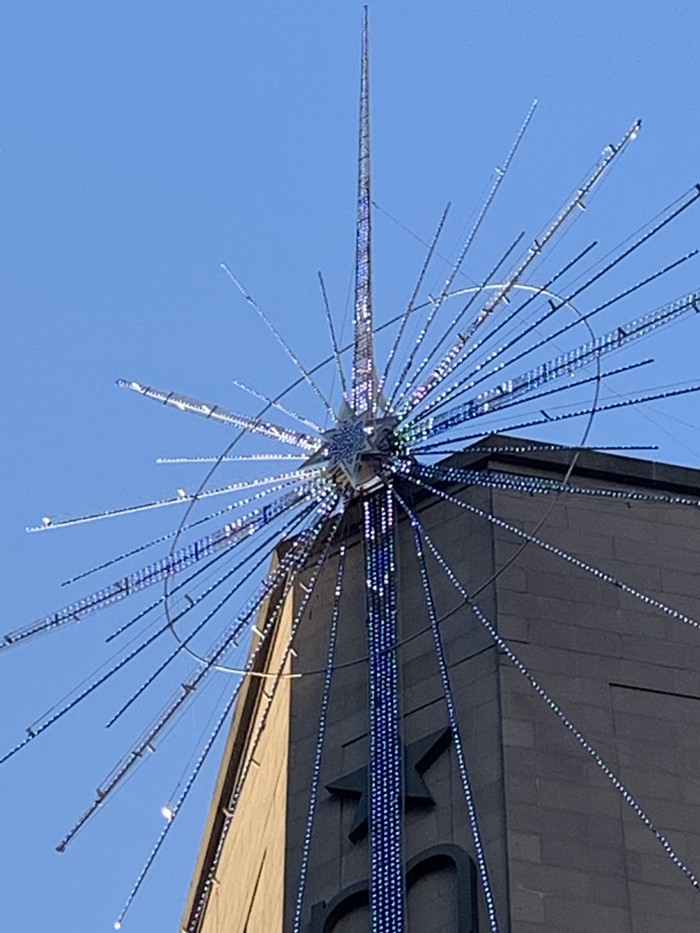 Does anyone else ever think one of those spindly arms will come loose and lance you? Would honestly be kind of cool. JK
This new Seattle Star also comes with a twist. Anyone with the funds can pay for a custom light show through 15 Seconds of Stardom, a new program that gives a (yet-to-be-determined) portion of the proceeds to Mary's Place. $15 will get you a 15 second light show on the star, which you can either see in person or receive a livestreamed recording. If you have a spare $1000, that'll buy you 30 minutes.

I felt strange viewing the Seattle Star this year, despite my love of spectacle and its Christmastime normal-ness. My face, and most of the other faces milling about Westlake, were swaddled in masks—because, pandemic. Rickety boards covered the street-level windows and doors of the building. The last time I was even inside the now semi-abandoned guts of the Macy's store, I was scuttling around trying to buy liquidated bras, socks, and makeup trinkets. Which is to say it all feels a little hollow.

In some ways, Amazon and a distant real estate group teaming up to bring Westlake its star reminds me of another recent cultural skirmish. Last month, Amazon received the smaller pink elephant sign from Elephant Car Wash as a gift. Amazon is expected to eventually display it at one of their many South Lake Union offices. Their hand in refurbishing this Christmas star feels similar: a somewhat begrudging engagement with the city and its people. And all to a nearly empty Westlake Park, no less.