Why I Will Never Understand People Who Need Emotional Support Animals 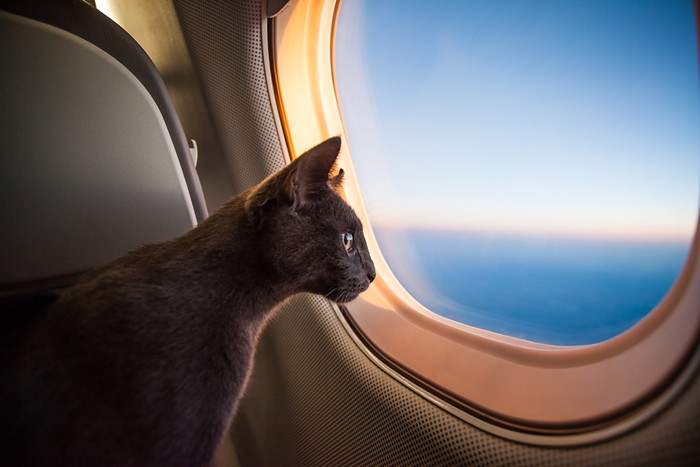 "What the fuck is this?" GummyBone/gettyimages.com
On Dec 3, 2020, the US Department of Transportation informed the public that airlines now have the power to reduce the status of support animals from service animals to mere pets. The main difference between a service animal and support one is that the latter does not require any training. Any old pet can provide emotional support to his or her human partner.

The new rule was also prompted by an increase in service animal complaints from passengers with disabilities, a lack of clarity around the definition of "service animal," misbehavior by emotional support animals and disruptions caused by "requests to transport unusual species of animals onboard aircraft..."

This is, of course, a major blow for those who really are tranquilized by the presence of their pets during a long and often bumpy flight. The ruling also reveals how the notion of emotional support is vague in our society. The general understanding is that something like blindness can be seen and, as such, has a value that's objectively verifiable, whereas the value of emotional neediness is too subjective, too inward, too intangible. This is why a number of the articles about the USDOT's recent policy shift use an image of an animal that humans rarely use for support, such as a peacock. Accompanying the general feeling that emotions are vague (or not a real thing like an amputated leg or a punctured eye or a broken spine) is the certainty that most of the emotional animal claims are nothing more than a scam. A service animal can fly for free, a pet cannot. Because no one can really tell how an animal makes you feel inside, it is easy, by deception, to deprive an airline of its $200 or so pet fee.

But I do not want to get into all of that. My main purpose in this post is to consider this emotional pet business from the perspective of a human (namely me) who finds the bodies of animals to be emotionally repulsive.

Before I write a word more on this matter, I want to make it clear that I see myself as an animal and that I live with pets (cats). What the former shows is that I locate animals on an ontological plane that's not hierarchical but flat. What this means is that the biological features (emotional, intellectual, physical) of humans cannot be disconnected from those of other animals. A dog or cow or goat or crow experiences the world with the validity and intensity of a human being. As for the former, my pets and I have an understanding. They can live with me, but they must do their best not to touch me, sit on me, or lick me.

For reasons that might be personal or cultural, the ground of my sense of being in the world is destabilized by even the slightest physical contact with an animal that's not human. Even the innocent and maybe loving lick of a dog plunges my mind into the vivid depths of the hound's tongue, which is warm, horribly alive, and viscous. Or, if a cat cuddles on my lap, all of my attention is captured by its beating heart and guttural purring. It's truly amazing to me that someone could extract even a drop of emotional stability from the body of a pet that's busy breathing, busy pumping blood, busy burning the food it has eaten. But how is it I do not feel this way with human bodies? Because unlike non-human animals, which are always so full of life, we tend to be half dead.

Now, back in 2010, I boarded a plane operated by Alaska Airlines. The flight would transport me from LAX to Sea-Tac in a little over two hours. I found my seat. It was next to a middle-aged Latina. I noticed that her eyes were fixed on me as I shoved my carry-on spinner into a stuffed baggage compartment over our seats. After some effort, I finally closed the compartment's door and took my seat. The woman's eyes were still on me. Was I in the wrong seat? I checked my ticket. It said I was in the right seat. So, what was this woman's problem?

When I finally looked at her looking at me, she said with a voice cracked with worry, "I need to ask you a favor. I usually fly with my husband, but this time I'm alone. He is in Seattle. He left there last week. I could not leave LA until today. But I really hate flying alone. I always need to put my head on my husband's shoulder when a plane takes off. Would you let me do that? Let me rest my head on your shoulder? Once we are in the air, I will be fine."

She lied to me. I gave her my shoulder for the take-off, but she did not return it until we landed in Seattle. Indeed, she did not say a word to me until we were back on the ground. For the whole flight, she clung on my shoulder as if it kept us from falling out of the sky. I was fine being her support animal from LAX to Sea-Tac. Half-dead (or even half-ghostly) human contact makes perfect sense to me.