How to Look at Christo and Jeanne-Claude's Valley Curtain 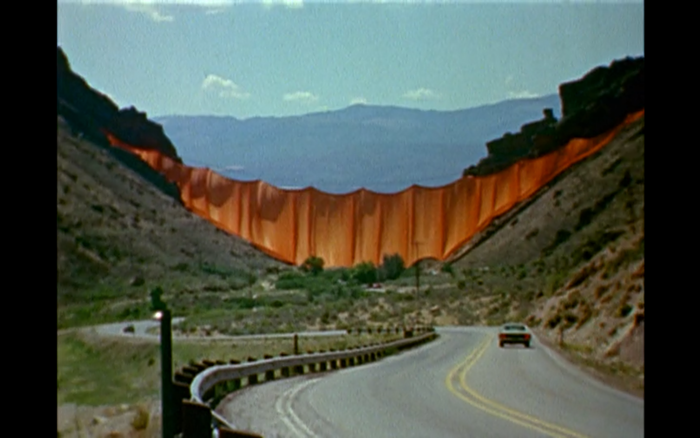 Oh how I wish I could have seen Valley Curtain in person. Screenshot from Christo's Valley Curtain.
I imagine seeing art duo Christo and Jeanne-Claude's Valley Curtain billowing just above a portion of the Colorado State Highway must have been an incomprehensible but beautiful sight to behold. That sherbet orange against the dusty brown of the landscape. The way the fabric must have sounded moving in the wind. The fact that someone hung a fucking curtain in a mountain valley, like a child's dream come to life.

Though the project took 28 months and several dozen workers to complete, Valley Curtain only hung for 28 hours from August 10-11, 1972. The curtain had to come down due to strong winds that all but shredded the fabric the artists' team had so diligently hung hours before. "I as an artist have done what I set out to do,” Christo said about the artwork. “That the curtain no longer exists only makes it more interesting.” And he's right.

Luckily for us, the magic behind this very temporary curtain is encapsulated in the Maysles Brothers and Ellen Giffard's Academy Award-nominated Christo's Valley Curtain, which you can currently stream on Criterion Channel. The short film documents the laborious process of hanging the 200,200 square feet of orange nylon fabric across Rifle Gap in Colorado while capturing the moment's real drama.

A group watching the curtain get stuck while coming out of its cocoon. Screenshot from Christo's Valley Curtain.
In the quick film, construction workers carefully balance on cables suspended high above the ground. A frazzled European artist wrapped up in a project much grander than himself tries to shout orders to a diffuse American crew. Dozens of temporary workers fight to secure the curtain to the earth. The absolute unmitigated joy at the project's success. It's an effort of Biblical proportions, and Christo's Valley Curtain greedily slurps up as much of the drama as it can.

The grouchy among you might be asking, "Why?" What's the fucking point? Couldn't anybody make this?

While the artists were reticent to explain their work, both emphasized the pure aesthetic enjoyment of seeing their constructions—not their utility. "We make beautiful things, unbelievably useless, totally unnecessary," Christo told the Sunday Times in 2018. Christo and Jeanne-Claude's Valley Curtain is exactly that: beautifully unnecessary, and also wholly appreciated for being so beautiful and so unnecessary.

Maybe the idea behind this dreamy piece of environmental art is best expressed by a good ol' boy construction worker who becomes a core character in Christo's Valley Curtain. "You couldn't put something up like this with just an attitude of 'What the hell, who cares?' You gotta want to do it," he tells a reporter after an hours-long unfurling of the curtain.