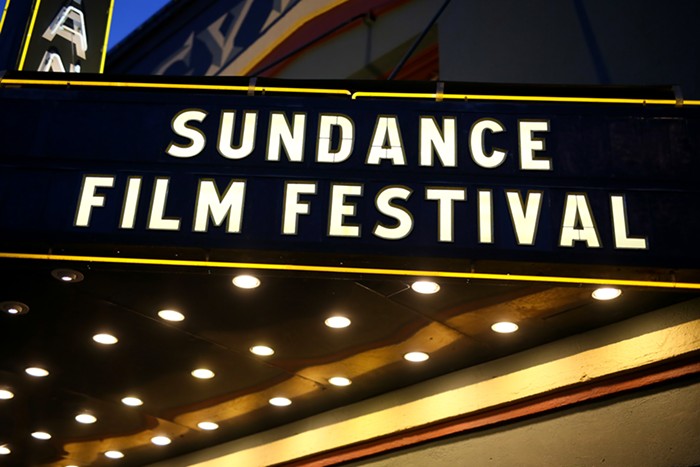 You'll have to imagine the marquee this year. Courtesy Sundance/Jemal Countess
The upcoming Sundance Film Festival will look a bit different in 2021.

For the first time since it began in 1978, the festival will partner with the Northwest Film Forum (NWFF) for screenings from January 28 through February 3, 2021. Tickets will be made available at festival.sundance.org starting January 7, with a lineup to be announced in mid-December.

The seven days of programming will be available digitally due to COVID scuttling any in-person festival plans. The shift to an online festival will bring 70 plus features, 50 short films, and various Q&As right into audiences' homes. The festival will offer live showings of films that can also be viewed anytime within a three-hour window and for a second time two days after the premiere.

"Sundance Film Festival's approach to their 2021 festival is an innovative way to adapt to COVID, which also enables grassroots networks to engage their audiences on hyperlocal terms," Northwest Film Forum Executive Director Vivian Hua said in a release. "The experimental ethos is very much in line with NWFF's approach to our own programs, and we can't wait to represent the Pacific Northwest as the only satellite venue in this region."

In an interview, Hua said the selection process was "invite-only" and had to be kept secret for a while before NWFF's selection could be made public.

For those unfamiliar, the NWFF is a historic nonprofit film and arts center in Seattle, right in the heart of the Capitol Hill neighborhood on 12th Ave, near the Seattle Police Department's embattled East Precinct. It has been host to many acclaimed filmmakers, including a notable appearance by a charming young man and future Oscar winner by the name of Barry Jenkins who presented his debut film Medicine for Melancholy there in 2007.

This festival won't see Jenkins or other big directors strolling into the theatre as Hua said NWFF decided to go entirely virtual. However, audiences can still expect robust virtual programming that Hua has been working on putting together.

"We are hosting four extracurricular events, which are more like workshops and discussions. They aren't just local to our community but are whatever we want them to be that we think will support the direction that Sundance is going in with their film programming," Hua said. "One is around this Black filmmakers' program that we are curating with three other national partners, and we are going to have a series of discussions around the theme, which is Our Right To Gaze."

The program is a series of six short films that has "filmmakers gaze at themselves and their world and try to make sense of what they see reflected back." It features Black artists that cover a variety of genres.

The rest of the programming is still under wraps, but Hua said it will be revealed closer to the festival. NWFF will also have its own dedicated portal on the Sundance website when the festival kicks off.

While the loss of the in-person festival experience is a bittersweet feeling, Hua hopes the changes this year can be part of a new emphasis on providing access to often hyper exclusive events.

"Park City, Utah is a very inaccessible and extremely expensive place to go every year. It keeps a lot of people from being able to attend," Hua said. "As Sundance is thinking more about opening their doors more to communities of color in addition to their supporting programs, I think this is part of the reason they're doing it this way."

Hua said she hopes those interested in the festival, especially those who may be participating for the first time, will feel welcome in forming a community relationship with smaller arts organizations like NWFF.

"All the large cinemas, they're not serving the community at this time," Hua said. "It's important to see the local organizations that are actually continuing to show up despite their own difficulties."

You can find the Northwest Film Forum at www.nwfilmforum.org and support their programming via their donations page.

Comments 1
Tags: News Film/TV Sundance Comes to Seattle
The Stranger depends on your continuing support to provide articles like this one. In return, we pledge our ongoing commitment to truthful, progressive journalism and serving our community. So if you’re able, please consider a small recurring contribution. Thank you—you are appreciated!
CONTRIBUTE NOW