In His Last Film, Chadwick Boseman Cries "God Why Have You Forsaken Me?” 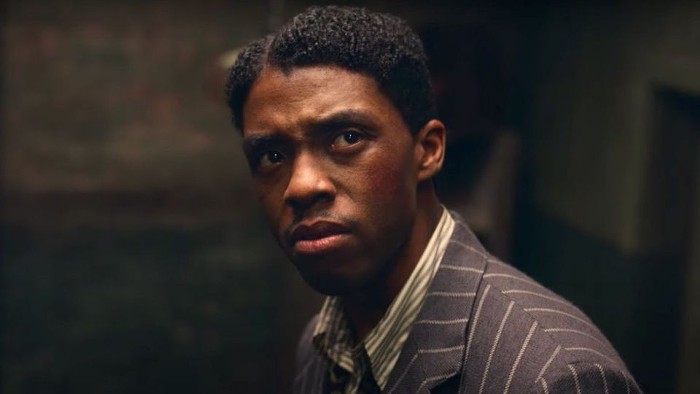 Chadwick Boseman in Ma Rainey's Black Bottom. Netflix
A year before Chadwick Boseman died of cancer, he played one of the most complex characters in August Wilson's ten-part Century Cycle plays, Levee Green, the cornetist in Ma Rainey's Black Bottom. It was to be the last role of an actor who had reached American iconic status with his performance in Ryan Coogler's 2018 global box-office monster Black Panther. Now, when Boseman played the king of Wakanda, almost no one knew he was fighting for his life. But when we watched him in the film adaptation of Ma Rainey's Black Bottom, released by Netflix on December 18, it was well known he was a goner. And so his death, which shocked the world when it was announced in the third week of August, cannot help but be at the center of a film that not only concluded his short career but also involved him with two of the top names, Denzel Washington (the film's producer) and Viola Davis (the film's star), of the A-list black Hollywood club he officially became a member of in 2018. (Ma Rainey's Black Bottom is the second work in Washington's current project to bring all of Wilson's plays to the big screen—the first is Wilson's Fences, which also starred Davis.)

For those who have not watched this movie, I'm not spoiling it for you when I point out that Ma Rainey has the greatest ending in all of August Wilson's Cycle plays. And it also has one of the most gripping scenes, which has Levee challenging God Himself. I will not describe how this all comes about, but know it gets to the root of Christian belief and pulls it right out of the ground and exposes it for all to see.

Those who know what I'm getting at will easily find in the echo of Levee's discharge of blasphemy the same rawness that is in this line in The Beatnuts' boom-bap classic "Do You Believe": "...You believe in God?/You do!/Tell him to save you/Cause me and these niggaz here/We ain't tryin' to save you."

Levee goes there. And when you watch those kind of un-Godly feelings coming out of a dying man's mouth, you know you have passed the point at which the actor is about the character and the actor is instead about himself. Yes, Viola Davis gives us nothing less than a first-rate Ma Rainey; and, yes, the film's director (George C. Wolfe) and screenwriter (Ruben Santiago-Hudson) show they have been, are, and will continue to be the gold standard in the adaptation industry of August Wilson's thinking, poetry, and racial metaphysics. But this new work is really about the death of a young icon of American popular culture. And the scene between him and God is the movie's massive-sized black hole. Nothing in Ma Rainey can escape the pull of Boseman's personal off-screen tragedy and its powerful interaction with one of Wilson's most tragic characters.

Now I have go-to people in my life as a cultural worker. I go to Jonathan Golob to bring me up to speed with developments in science. I go to Steven Shaviro to improve my understanding of contemporary philosophy. I got to Rebecca Brown's novels for ideas on how to make English more like quantum physics and less like Newtonian physics. I turn to James Latteier to share ideas concerning intellectual culture in general. And I turn to Ahamefule Oluo to deepen my knowledge of jazz old and new. That said, I want to point to a big influence on Oluo's music: the tragic trumpeter Booker Little.

It was Oluo who recommended a few years ago that I listen to Booker's last record as a bandleader, Outfront. Why? Because he recorded it not long before he died from uremia-related causes in 1961 at the horribly young age of 23.

The key piece on this album is "Moods in Free Time."

What you hear in this piece is the cry of a man who knows death is robbing him of a long and brilliant career in jazz. And he plays like he is being robbed. He blows like nothing can save him, not even his tremendous genius. “My God, My God, why hast Thou forsaken Me?” This is Jesus at 33. This is Booker at 23. This is Boseman at 43. This is the cry of the forsaken we hear in Ma Rainey's Black Bottom.