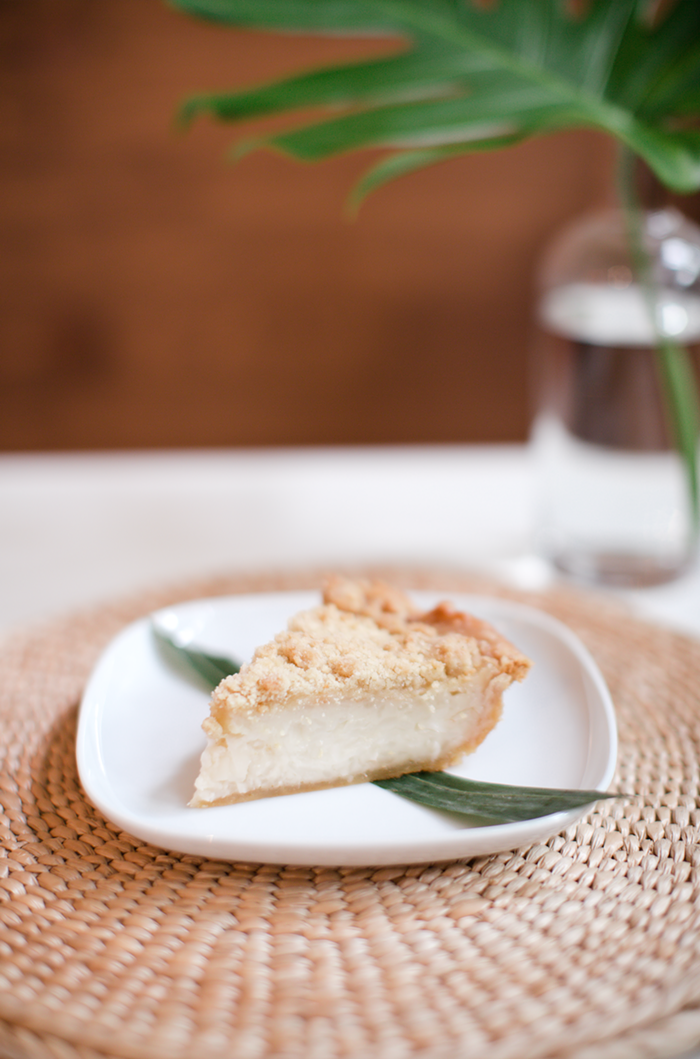 It is love, pure and simple. Courtesy of Jeriel Calamayan and Hood Famous Bakeshop
The first time I took a bite into a buko pie, I felt like I understood love. It was as if the secret to one of life's greatest and most complex purposes was delicately wedged between the layers of flakey crust and in the creamy, coconut filling. Though I had never had the dessert before, eating buko pie felt like coming home.

Chera Amlag, the James Beard award-nominated founder and co-owner of Hood Famous Bakeshop and the big brain behind this iteration of the popular Filipino dish, agrees. "If love means warm, comfort, flavor, texture bomb in your mouth, then—yes!" she laughed. She says the sweet-but-not-too-sweet buko pie is special, making her feel connected to the Philippines although she's thousands of miles away.

Hood Famous's buko pie consists of a creamy coconut filling with strips of young tender coconut ("buko" in Tagalog) on top of a buttery crust and covered with a crumbly, streusel topping. While you can eat this slice of heaven warm, heating it up in your oven for half an hour, you can also eat the treat straight out of the fridge. I slowly ate a cold slice this morning with a cup of hot coffee, enjoying the chewy texture of the buko with the savoriness of the crust. I'm pretty sure I transcended.

Buko pie originated in the Philippines' Laguna province with the Pahud sisters, who created the dish while setting up a bakeshop of their own. One of the sisters, Soledad, learned to make apple pie while working as a maid in the United States and wanted to replicate the dessert in the Philippines. But lacking access to apples, her family suggested she improvise and use buko instead, which were much more abundant in her hometown. Thus, a legend birthed a legend.

The dish's origin story resonated a lot with Amlag, whose famous ube cheesecake also weaves together different culinary traditions from across the Pacific.

"What I've been doing is taking a cheesecake and then putting ube—something that is a Filipino ingredient that isn't necessarily seen in a Western dessert—[in it]," she said. "And here is one of the sisters...who is taking something that she enjoyed while she was overseas in the United States, an apple pie, and bringing it home and doing her spin on that."

Born in the Philippines, Amlag immigrated to the U.S. as a child and had buko pie for the first time as an adult when she made renowned chefs Amy Besa and Romy Dorotan's recipe for herself. Amlag then put her twist on the pie, adding the streusel on top ("I love streusel on anything") and using much thinner slices of buko in the dish. She began offering the treat, initially only for special holidays when Hood Famous first opened up shop in Ballard.

Customers liked it so much that it became a permanent addition to their menu when the bakery expanded into a café in the International District in 2019. The dessert is routinely sold out around major holidays, a new Thanksgiving and Christmas staple for many families across the city. "I liked feeling that we're offering something unique to Seattle and giving them a taste of what folks in the Philippines are eating," she reflected.

You can walk in to grab a slice or a whole pie during business hours at their International District location. You can also preorder a pie on their website for pickup, where they just started offering delivery (to customers living within a five-mile radius). Do it and your Valentine's Day will be that much sweeter. <3